How much does security performance vary among Android protection apps? In an endurance test from January to June 2020, the lab at AV-TEST found answers to this question, revealing some surprising results. 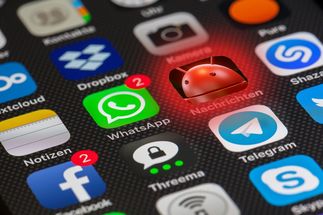 The confidence of private Android users in their system and the installed apps is quite high. Many cyber-gangsters try to exploit this somewhat blind trust using infected apps. Younger users are often targeted in particular. The criminals offer them special, free gaming apps, in which Trojans and other malware samples are often concealed.

In a major test from January to June 2020, the lab evaluated 14 Android protection apps under Android 8.0 (Oreo). The test involved the apps from AhnLab, Avast, AVG, Avira, Bitdefender, F-Secure, G Data, Ikarus, Kaspersky, McAfee, NortonLifeLock, securiON and Trend Micro. For comparison, Google Play Protect was also included in the mix, as it is automatically launched with Google's Play Store on every Android device.

The result shows that there are several good security apps for Android that also guarantee enduring protection in an endurance test. Each app was evaluated in terms of its protection, performance and usability. For each category, the laboratory awards up to 6 points, i.e. a maximum of 18 points. A total of 5 apps managed to achieve this perfect score. They are from Avira, Bitdefender, G Data, NortonLifeLock and Trend Micro. Following close behind with 17.7 points was the Kaspersky app, with 17.5 points the protection tool from securiON, along with the apps from AhnLab and McAfee with 17.3 and 17.1 points respectively. The 4 additional apps from F-Secure, Ikarus, Avast und AVG achieved between 16.8 and 15.4 points. Finishing dead last on the list was Google Play Protect with a mere 6 points. 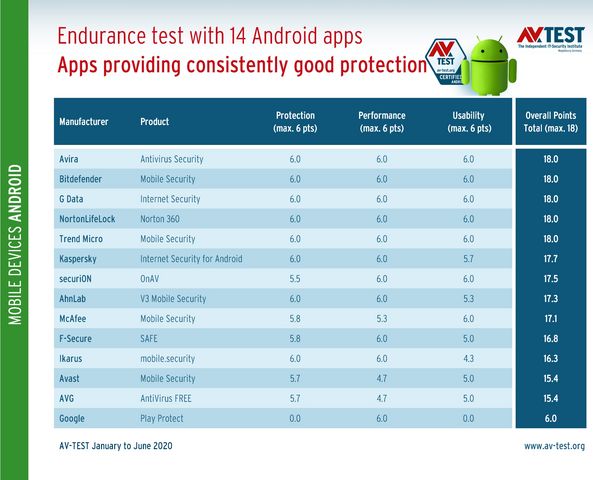 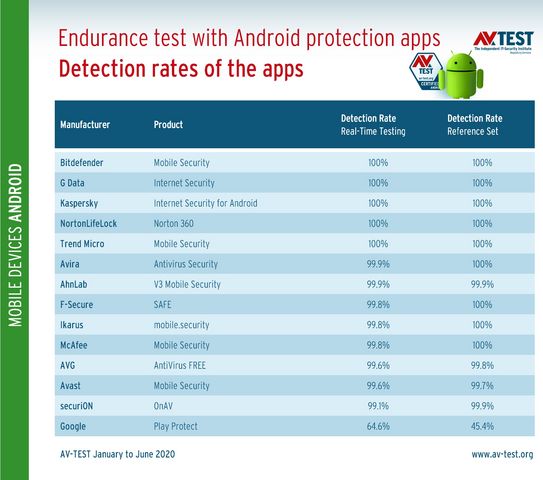 Already upon downloading apps from the Play Store or launching them later on the Android device, Google Play Protect ought to reliably detect, block and erase infected apps. Sounds good in theory, but it doesn't really work in practice. In the real-time test conducted during the test period from January to June 2020, the lab deployed nearly 10,000 totally freshly-found infected apps. This was followed by the reference set consisting of a total of nearly 10,000 somewhat older and often more well-known infected apps. The Google result is sobering: Throughout the test period, Google Play Protect exhibited an average detection rate of 64.6 percent in the real-time test. The reference set was only detected by up to 45.4 percent. As a reminder: these are the older, mostly more well-known malware apps. In rounded numbers, this means that in the tests, Google Play Protect misses roughly 3,500 to 5,500 apps containing hidden malware.

The fact that it's possible to do a much better job is seen in the apps from Bitdefender, G Data, Kaspersky, NortonLifeLock and Trend Micro. They detected the nearly 20,000 malware apps in both tests without exception: 100 percent. This was followed by the app from Avira, committing a minor error in the real-time test: 99.9 percent, but otherwise 100 percent. The additional apps from AhnLab, F-Secure, Ikarus and McAfee also committed minor errors in detection in one or both tests. But they still attained an excellent score between 100 and 99.8 percent. The remaining apps from AVG, Avast and securiON still achieved scores between 99.9 and 99,1 percent in the tests.

Anyone putting a load on the system will be thrown out

It doesn't matter how good a protection app is: as soon as it starts to slow down the mobile device or heavily drain the battery, it is deleted by the user. That is why the lab examines how heavily the protection apps put a load on the system and battery and whether they use lots of data in the background. The result is favorable: 11 of the 14 apps tested had a clean bill of health in all aspects and received the maximum 6 points awarded by the lab. Only the app from McAfee transmitted quite a lot of data in the background in one instance: this resulted in a mere 5.3 points. The apps from Avast and AVG frequently shuttle too much data in the background: they each received a mere 4.7 points. Google's Play Protect, with a totally clean slate in this category, received 6 points. 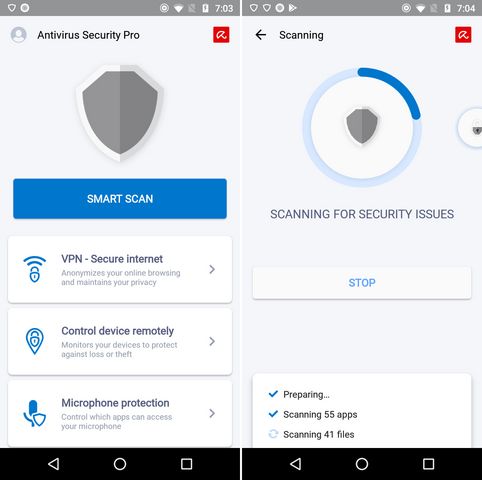 With 18 points, the Avira security app definitely belongs among the apps worth recommending 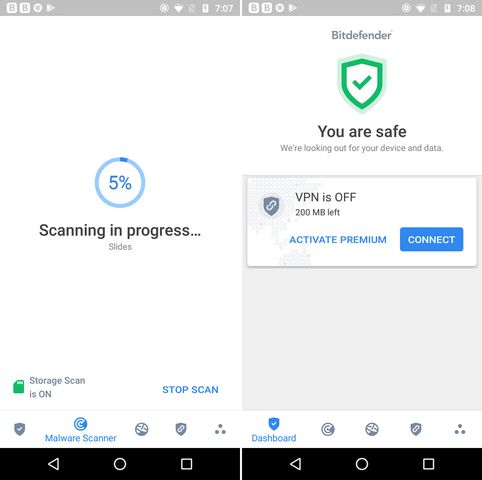 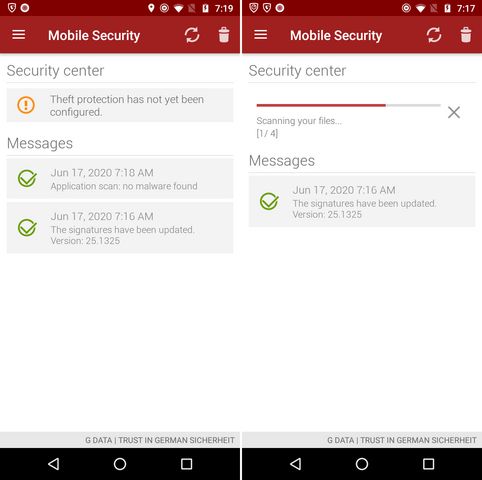 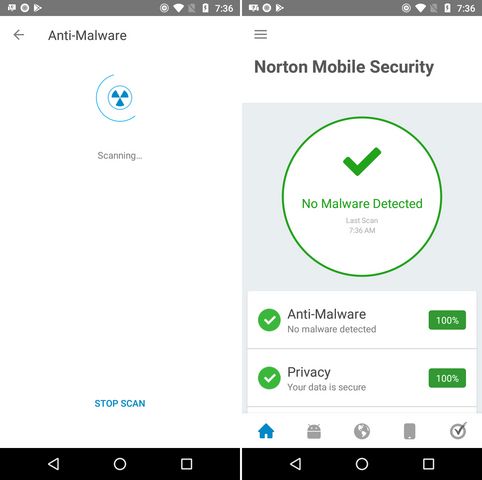 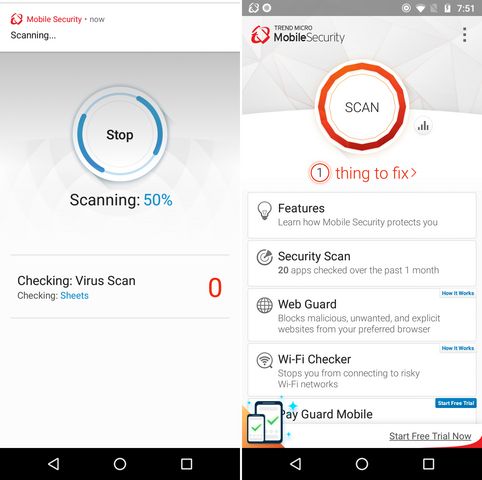 This app, offering a full range of features, achieved 18 points in the endurance test and thus garnered the top score

Naturally, it's not good when a protection apps fails to recognize a malware app. However, it is far more nerve-racking when a protection app constantly flags innocuous programs as alleged malware apps. These false alarms are unnerving to users, which is why they should not occur. In order to test this scenario, the lab installs many harmless apps on the test devices. Throughout the entire test period, this involved over 6,000 innocuous apps from the Play Store and just under 2,500 additional harmless apps from other sources. The result is quite a surprise: In the tests, Play Protect triggered a false alarm nearly 50 times on harmless apps that originated from its own store. Add to this nearly 80 additional false alarms for apps from other sources. That is why in the endurance test, no points were awarded to Google Play Protect in the category of usability.

While other protection apps also had problems with false alarms, their rate of detection was roughly in the range of 3 to 10 false positives. Kaspersky's app did overreact slightly: 5.7 points. AhnLab 5.3 points. The apps from Avast, AVG and F-Secure caused false alarms a few times: 5.0 points. The app from Ikarus often mistakes friend for foe: a mere 4.3 points

The apps from Avira, Bitdefender, G Data, McAfee, NortonLifeLock, securiON and Trend Micro show the competition how it's done: no false alarms, thus the full 6 points.

No one can live on Google alone

Google does try hard with Play Protect, but in terms of security, it is no match for the specialists by a long shot. Play Protect lets every second or third malware app through without taking action, and on the other hand, it often classifies harmless apps as dangerous. That's why the lab recommends deploying a good third-party protection app. The endurance test with 14 security apps offers a wide selection to choose from. The top rankings, scoring 18 points each, were earned by Avira, Bitdefender, G Data, NortonLifeLock and Trend Micro. This makes them worth recommending without reservation.

With the exception of Google Play Protect, the lowest result in terms of detection still achieves 5.5 points. In total, 9 out of 14 apps earned between 17 and 18 points. This demonstrates that they are good companions for device protection over the long haul.