This is how well security packages protect porous XP systems

In April 2014, Microsoft ended its support for Windows XP, although thousands of XP PCs are still running in private homes and company offices. That is why AV-TEST decided to test one last time how well security suites for private users and security solutions for companies now protect porous versions of XP. 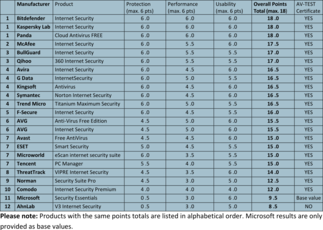 A total of three security packages under the XP test platform achieved the maximum of 18 possible points (testing period in May and June 2014).

According to statistics portals such as statcounter.com or netmarketshare.com, up to 25% of desktop PCs worldwide are still running Windows XP. In Germany, it is believed to still be nearly 10%. Since April 2014, these PCs will no longer receive any security patches from Microsoft. Previously, Microsoft distributed an average of five updates per month. Can these PCs, now exhibiting Windows-based security gaps, be protected against threats using a current security solution?

In order to find answers to this question, AV TEST labs tested nine suites for companies and 23 Internet security packages in May and June 2014 under Windows XP.

Clients under XP can also remain well protected (testing period in May and June 2014). 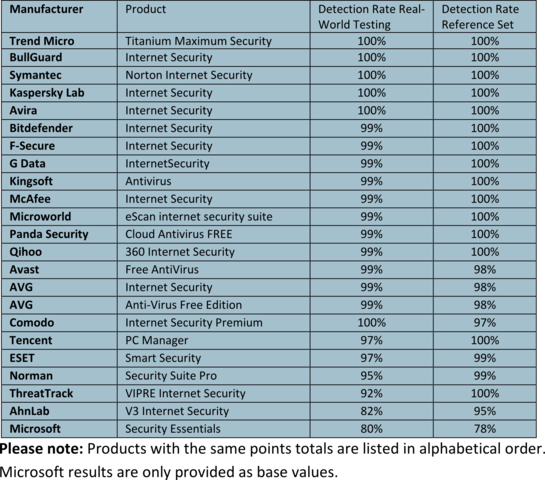 5 of the 23 system watchdogs tested in the lab detected all the attackers without a glitch (testing period in May and June 2014).

3 of the 9 clients delivered impeccable detection performance under XP (testing period in May and June 2014).

The latest intruders try to directly exploit known or only recently discovered vulnerabilities in Windows. Because these holes will no longer be plugged by any Windows updates, the security solution has to get the job done. The test result indicates that the suites and the network solutions by and large do an excellent job.

Of the 23 tested Internet security suites, 3 achieved the maximum point score 18 and an additional 9 between 16 and 17.5 points. That is excellent performance for more than half the participants. The three best results were achieved by Bitdefender, Kaspersky Lab and Panda Cloud Free.

Among the 9 corporate solutions tested, the final result was also good. Trend Micro scored 17.5 points, followed by Bitdefender, Kaspersky Lab and McAfee with 17 points each. The additional results range from a solid 16.5 to 15.5 out of a possible 18 points.

The most difficult test regimen for all security packages is the detection of malware. While the packages in the real world testing were required to detect and liquidate some 160 brand-new specimens of malicious code, the AV-TEST reference set included an additional ambuscade of 24,000 known malware threats.

Among the desktop solutions, 13 of the 23 products achieved the highest point score of 6 in the Protection category! An additional 8 packages achieved 4 to 5.5 points. Only Ahnlab and Microsoft each scored a mere 0.5 points.

In the business suite category, the protection result is even better as a percentage: 7 solutions achieve the maximum 6 points, one solution scored 5.5 and Microsoft 0 points.

Some of the manufacturers with a maximum point score in protection command a decent share of system resources for their good results - while others do not. For desktop security suites, only the packages from Bitdefender, Kaspersky Lab and Panda put practically no strain on the test systems. While the solutions from Avira, F-Secure, Kingsoft, Symantec and Microworld also deliver top performance in terms of protection, they require a remarkable share of system resources, however.

Among the business solutions with top scores in the Protection category, only Trend Micro and Bitdefender earned 5.5 out of 6 points in the Performance category. All the other solutions did a good job of protecting, but they require more system resources to do so.

In the test category of usability, all security solutions had to connect to 500 clean websites, were not allowed to block anything during over 40 program installations and were tasked to scan nearly 450,000 clean files without a false positive.

All the solutions, both in the private and business category, achieved good scores and received 5 out of a maximum of 6 points for this. Only Comodo earned a mere 4 points.

What is the future of security solutions under XP?

AV-TEST asked several manufacturers how long they would continue to support Windows XP. Most of the vendors want to provide support at least up to January 2016. Others already even indicated the year 2017 and 2018. You can review the entire list in the News section at AV-TEST: The End Is Nigh for Windows XP: These Anti-Virus Software Products Will Continue to Protect XP after the End of Support.

In addition, the manufacturers Avira, F-Secure, Kaspersky and Symantec responded to the question as to whether their overhead was greater for client care under XP than for other systems. These vendors unanimously stated that the overhead remained the same, and that they would not neglect customer care and security one iota in the future. Thus, according to the manufacturers, there will always be an updated client specially geared to Windows XP. The newly published client versions for 2015 are also compatible with Windows XP SP3.

When will there be a major attack on XP?

None of the manufacturers surveyed anticipate a massive attack on Windows XP. There is concern, however, that individual vulnerabilities in XP will be selectively exploited due to missing updates.

All the vendors are in agreement in one area: Anyone running Windows XP should remember to constantly update installed utility software such as Java or Flash. What's more, XP PCs should not be used to constantly surf the Web or serve as an e-mail platform. Most of the malware finds its way into a Windows system via these pathways.

Here's another unanimous recommendation by the security vendors surveyed: Whenever there is an opportunity, the user ought to switch over to more recent Windows versions such as 7 or 8.

In case malware does happen to penetrate the system, there are ample resources available to clean up and repair Windows. AV-TEST has tested suites and special tools and published the summary findings in the news: 17 Software packages in a repair performance test after malware attacks.