Google ensures that each app in the Play Store and on smartphones is checked for Trojans and other kinds of malware. The current test shows that Android users are much safer with security apps than if they rely on Google. Here are the facts. 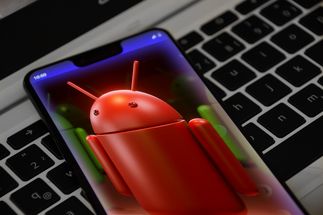 – these apps protect user the best

The sheer number of Android apps available in Google's Play Store is vast. Add to this many other sources with apps for Android. Unfortunately, there are more and more apps where a Trojan, a virus or something else could be lurking inside them. With Play Protect, Google promises protection against infected programs. That's why the tool runs automatically on every newer Android system, scanning available apps. The current test indicates, however, that Android users should not rely solely on Play Protect. Google's scan tool only identifies just over one-third of the nearly 6,700 malware samples in the test. Over 4,000 simply sneak through. For comparison: the poorest test result of the AVG security app has a detection rate of 98.9 percent. That is why it really can be worthwhile to install one of the other apps tested here.

The lab at AV-TEST put all security apps for Android through the same three-part test. During the test for protection, each security app was required to identify the roughly 6,700 malware apps. In terms of performance, the additional processor and battery load is determined by the apps. With respect to usability, tests are conducted to see how the security apps treat normal, innocuous apps. Because false alarms are annoying to users.

In all test categories, the lab evaluates the apps, awarding up to 6 points in the three categories. In this test, the best result of 18 points was achieved by the security apps from Avira, Bitdefender, G Data, Kaspersky, NortonLifeLock, SK Telecom and Trend Micro. Following very close behind is the app from securiON at 17.5 points. An additional 8 apps achieved 17 and 16 points respectively in the test. Last place finisher is Google Play Protect with a total of only 6 points. That is far too little for the AV-TEST certificate. All the other apps examined earn enough points for the certificate, documenting the proven security. 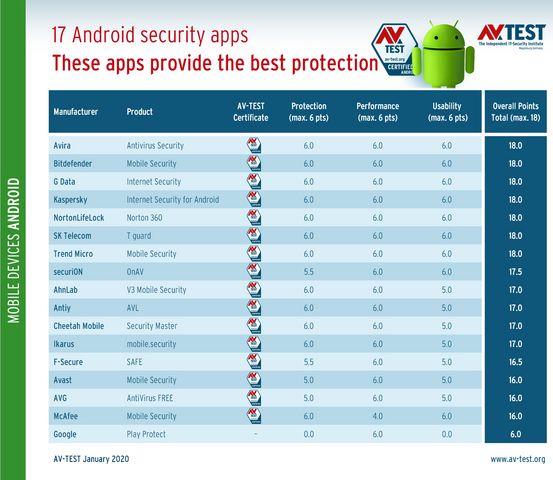 17 apps put to the test for good security under Android

For their strong performance, 7 of the 17 security apps tested receive the highest score of 18 points from the testers 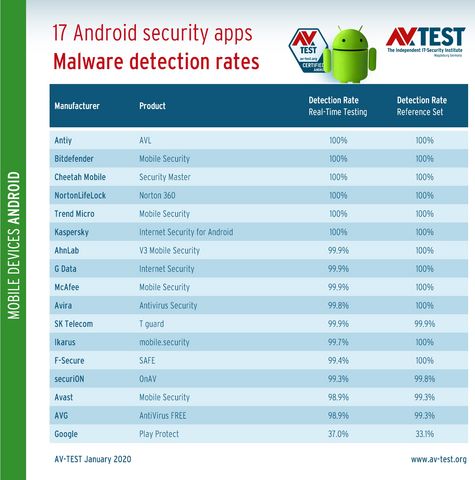 Here is how well infected apps are identified

Overall, 6 of the 17 apps examined flawlessly identify nearly 6,700 attackers in the various tests.

17 apps put to the test for good security under Android

Here is how well infected apps are identified

In the protection test, each app is required to detect infected apps in two phases. The real-time test confronts the security apps with over 3,300 totally new attackers. The infected apps are in fact not more than 2 to 24 hours old. In the reference set test, the security apps are required to fend off particularly widespread apps that have already been in circulation for up to 4 weeks. In this test, the lab also deploys over 3,300 dangerous apps. 6 of the 17 apps tested sorted out the attackers 100 percent in both tests: Antiy, Bitdefender, Cheetah Mobile, NortonLifeLock, Trend Micro and Kaspersky. The apps from AhnLab, G Data and McAfee detect 99.9 percent in the real-time test, and in the reference set, they function totally error-free. The following apps from Avira, SK Telecom, Ikarus, F-Secure and securiON commit errors in one or both of the test segments. Their rates range between 99.9 and 99.3 percent. The apps from Avast and AVG are slightly worse at 99.3 to 98.9 percent. Google Play Protect shows very weak detection performance: only 37.0 and 33.1 percent respectively. This poor performance yielded 0 points from the testers.

If a security app requires lots of CPU power, this can quickly have a noticeable effect on battery consumption. But here, the lab gives almost all apps a clean bill of health, awarding the full 6 points to 16 apps. Only the system watchdog from McAfee was a bit conspicuous in the test. It is always very busy in the background, and as a result, it uses a relatively large amount of battery resources. This caused points to be taken off: only 4 out of 6 points were awarded. 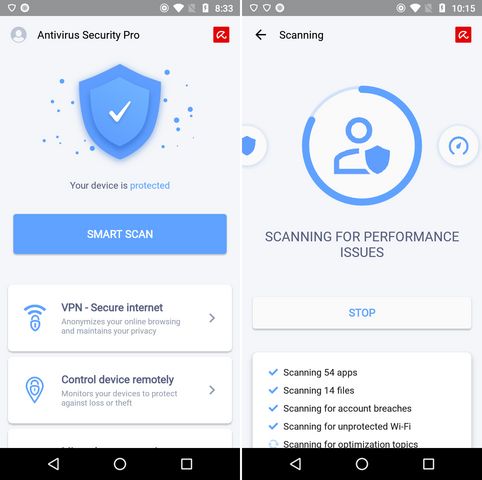 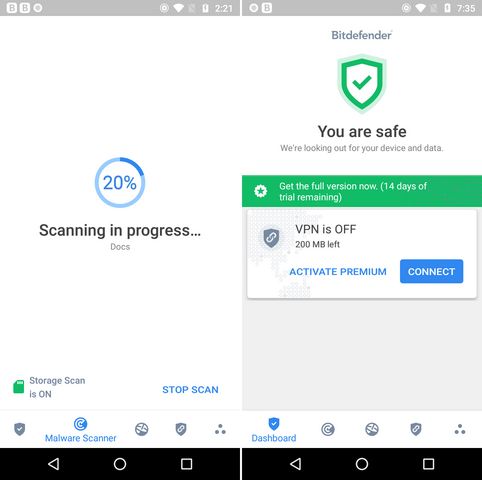 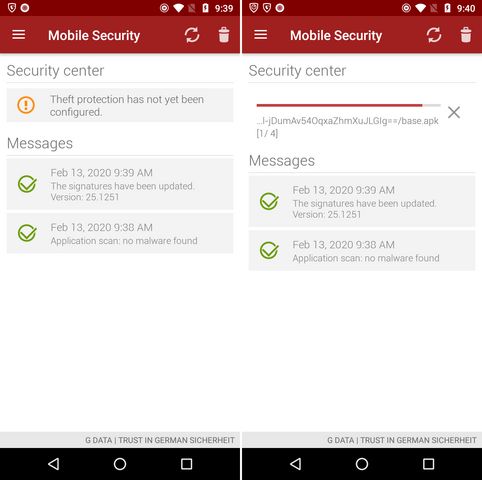 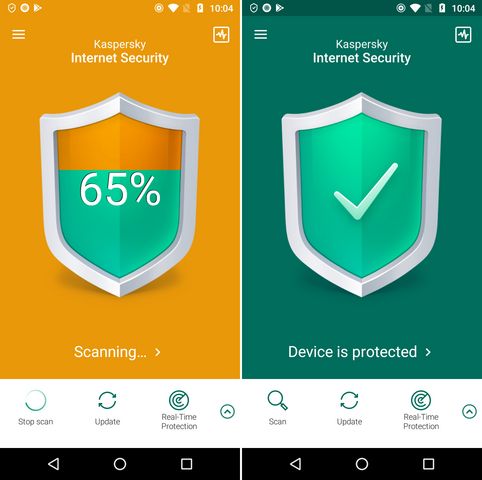 You can't do any better than 18 points – for the Kaspersky app, no problem 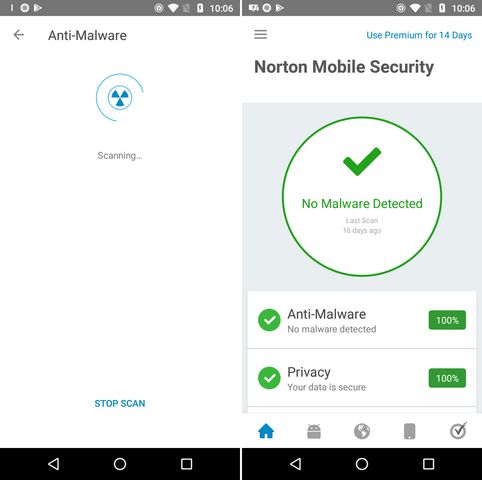 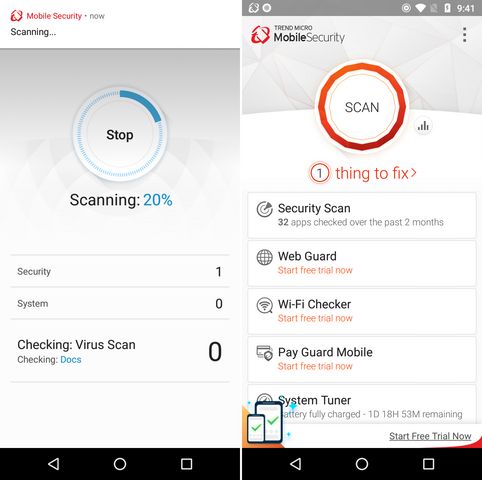 False alarms are a recurring event

Time and again, a security app classifies a harmless app as malware and proposes that the user delete it. The laboratory also tests this scenario, featuring over 2,000 apps from the Google Play Store and 850 apps from other sources.

Most of the security programs properly detect all the apps. For this, they received the full 6 points. The apps from AhnLab, Antiy, Cheetah Mobile, Ikarus, F-Secure, Avast and AVG falsely sort out a few individual apps, thus losing a point: only 5 points.

Google Play Protect once again takes up the rear, as the service falsely brands 30 harmless apps as being a threat.

As the detection rates of Google Play Protect are really quite poor, the use of a good security app is highly recommended. The range of apps tested offers a wide selection of reliable and battery-friendly security apps. The apps with the maximum point score of 18 are all paid apps with annual license fees, but that ought to be worthwhile to users in exchange for their security. While free apps are still included in the test, they are currently in the lower half of the table.

Here's another important fact: some of the apps offer many good extra features. These functions are not security-relevant to the tests, thus they do not enter into the evaluation. Those interested in the extra app features will not want to miss the additional article The best extra features in security apps for Android – what they have to offer!