Windows 11: 20 Client-Server Solutions for Corporate Users Put to the Test

More and more companies are migrating their workstation PCs to the new Windows 11. In the meantime, security software manufacturers are all offering a stable solution for the new system in their portfolios. But are these security solutions as secure, fast and reliable as they were under Windows 10? The lab at AV-TEST sheds light on this question in an initial test under Windows 11, and has a few surprises to report – both positive and negative. 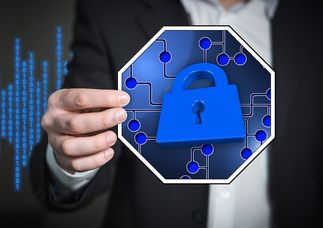 20 solutions put to the test

Now that Windows 11 has already been on the market for some time and is running smoothly, the first companies have started migrating to the new system. Some administrators are even letting out a sigh of relief after completing the move to Windows 11, because support for Windows 10 will be ending in 2025, and it takes time to migrate entire companies. A complete replacement of PCs is often necessary to fulfill the higher hardware requirements of the new operating system.

With their new corporate solutions, security software manufacturers are providing the right Windows 11 client. According to Microsoft, Windows 11 has received a total facelift in terms of security. It is said to be more secure and faster, and now features its own security center. But is Microsoft delivering on its promise? The lab at AV-TEST examined 20 client-server solutions for companies under Windows 11. Also in the mix: Windows Defender with all its protection functions, made out to be the arbiter of all things.

20 solutions for corporate users put to the test

Even though the lab replaced the testing platform for Windows 11, the tried-and-trusted testing structure has remained: The test is divided up into the three categories of protection, performance and usability. In the category of usability, all types of false alarms and erroneous messages are examined. In each test category, a manufacturer can achieve up to 6 points for its product. If a solution reaches 17.5 or even all 18 points, then it receives the additional accolade of TOP PRODUCT along with the certificate for tested security. 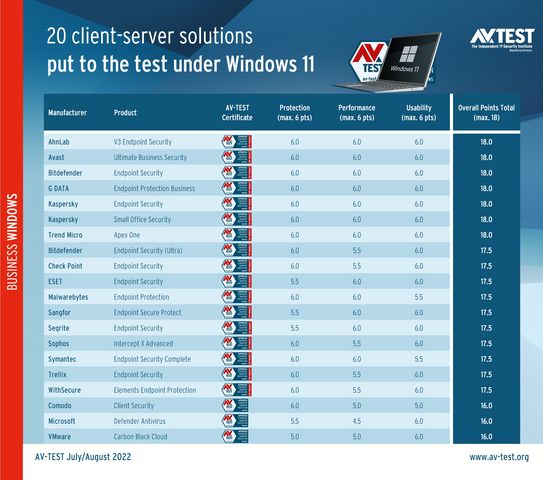 In the first test under Windows 11, many solutions for companies demonstrated that they are a reliable partner – 17 out of 20 even stood out with a rating as a TOP PRODUCT 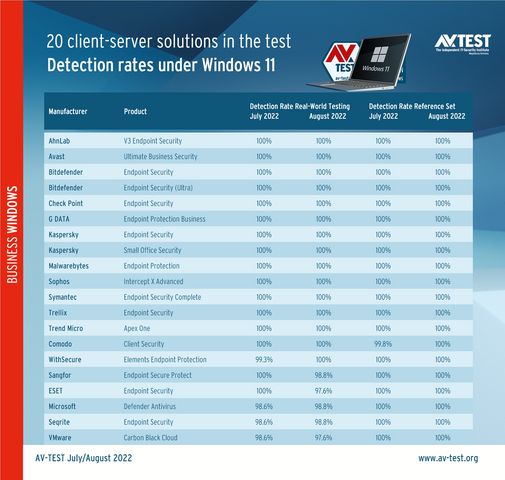 Among the solutions examined, 13 out of 20 detected the full gamut of malware in all test phases

The outcome of the test was excellent for many products. The highest score of 18 points was earned by AhnLab, Avast, Bitdefender, G DATA, Kaspersky with 2 versions and Trend Micro. This was followed by Bitdefender Version Ultra, Check Point, ESET, Malwarebytes, Sangfor, Seqrite, Sophos, Symantec, Trellix and WithSecure, scoring an excellent 17.5 points.

Finishing in the last three places with 16 points were Comodo, VMware and above all Microsoft with Defender. An unexpected surprise, as Defender under Windows 10 always scored favorably in recent tests.

The protection under Windows 11

In the vital protection test, the lab conducted a two-month evaluation as to how well the solutions fended off attackers. In the real-world test, the solutions showed how well they could hold up against more than 300 still unknown malware samples. In the test with the reference set, the security solutions were required to hold their own against over 30,000 already known malware samples.

In one month, Comodo and WithSecure struggled with minor detection problems – otherwise delivering excellent results. This also occurred with ESET and Sangfor one month; the detection problems were somewhat more serious, however, and both lost half a point as a result: 5.5 points.

Microsoft and Seqrite had several detection difficulties in two of the four test months: 5.5 points. Whereas the first two products only had half a point taken off for their results, poor findings cost VMware a whole point: in the end it only received 5 out of 6 points.

The performance under Windows 11

Years ago, the performance tests, the checks in terms of system load and speed, were always a sore point with the products. Because as soon as they achieved strong protection, the system load also increased. The products have actually already long since fixed these problems. In order to continuously evaluate these issues, the lab proceeds as follows: it performs many operations on a high-end PC and an average office PC with Windows 11 as a test platform. However: without using active Windows protection and without a security solution. The lab copies files, surfs websites, performs downloads, installs applications and launches them. The required time for all operations then results in the reference time for the test with active security solutions.

Protection clients from AhnLab, Avast, Bitdefender, ESET, G DATA, Kaspersky (with both versions), Malwarebytes, Sangfor, Seqrite, Symantec and Trend Micro work inconspicuously in the background under Windows 11 in terms of system load. This yielded a full 6 points for all of them.

Bitdefender (Ultra Version), Check Point, Sophos, Trellix and WithSecure caused a slight system load through the client. As a result, they all had a slight point deduction: 5.5 points.

Comodo and VMware are somewhat more conspicuous in terms of system load, so only 5 points were awarded. The surprise from the test result, however, was Microsoft with its Defender. The load on the client is so high that the lab awarded the lowest point score in the test: 4.5 points. 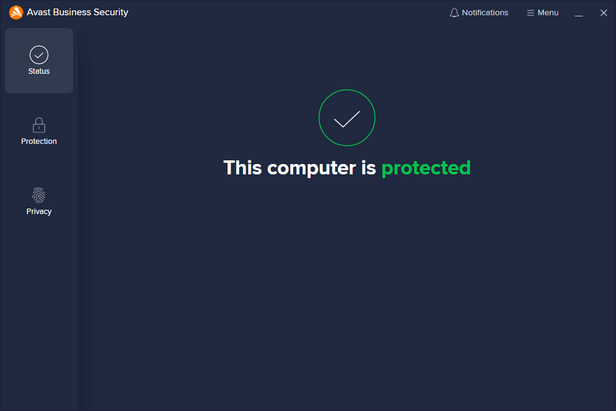 The security solution for corporate users completed the test error-free, and for this it received the full 18 points and additional recognition as a TOP PRODUCT 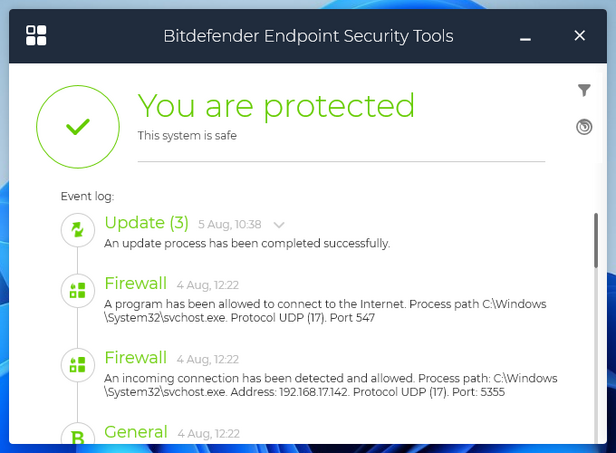 In all test phases, the endpoint version of Bitdefender earned the maximum point score and is therefore a TOP PRODUCT 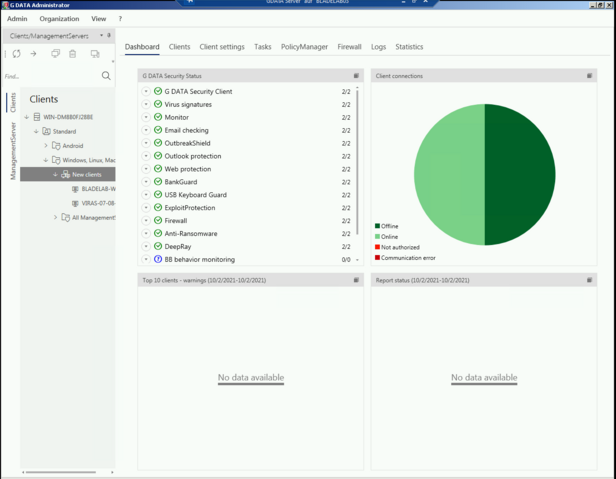 For error-free performance in all test phases, the endpoint solution under Windows 11 achieved the top score of 18 points and thus received recognition as a TOP PRODUCT 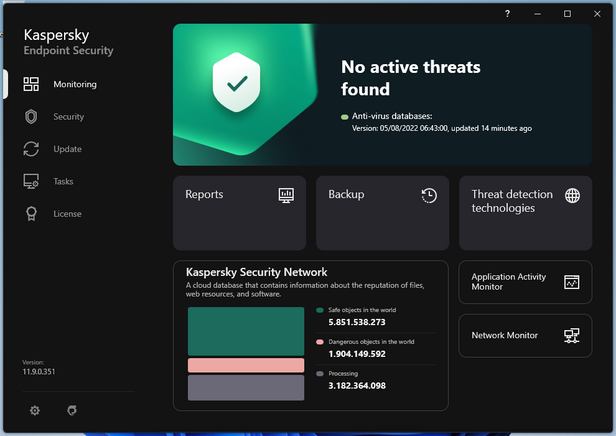 The reliable Endpoint Security product completed all the tests with the highest point score, and for its 18 points it was also recognized as a TOP PRODUCT 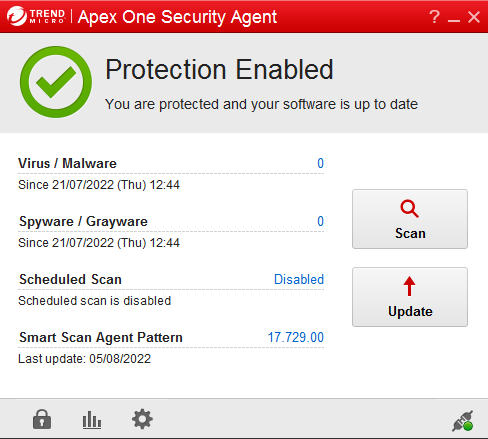 Also under Windows 11, Trend Micro stood out with top scores, thus receiving 18 out of 18 points and recognition as a TOP PRODUCT 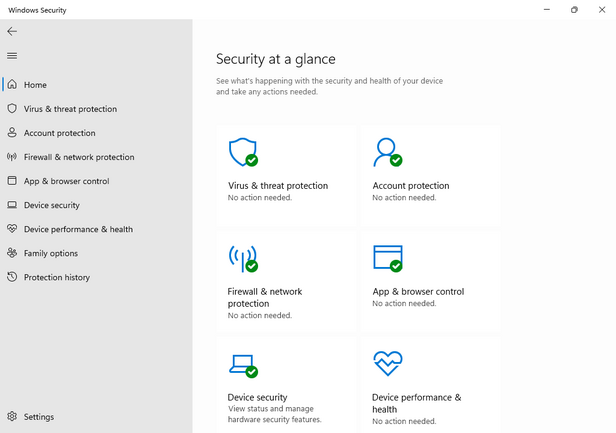 The standard protection of Windows 11 was a disappointment in the test: with 16 points, it ended up at the bottom of the chart

The usability under Windows 11

False alarms, also referred to in the industry as false positives, are always a nuisance for companies, as they burden security officers and departments unnecessarily. For a substantive test, the lab only carries out harmless operations: it visits 500 websites, scans nearly 1 million files, installs applications and launches them. In the best case, no false positives will occur for any operation.

This was precisely the case for nearly all the products, earning them the full 6 points. Only Malwarebytes, Symantec and Comodo committed a few errors, needlessly sounding an alarm. Malwarebytes and Symantec still received 5.5 points, Comodo only 5 points.

The test yielded excellent results for most of the professional endpoint products. The highest score of 18 points was earned by the products from AhnLab, Avast, Bitdefender, G DATA, Kaspersky with both versions and Trend Micro.