Those who prefer relative anonymity on the Web tend to rely on VPN software. But the software that opens up unimagined Internet paths is capable of much more. It allows users to bypass annoying geo-blocking or to tune their ping for gaming. The lab at AV-TEST examined two leading software packages and put together many facts on the topic. The test examined download speeds for files or torrents, along with vendor confidentiality. Anyone seeking greater privacy definitely ought to rely on VPN. 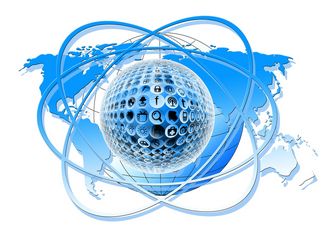 Users running a search on the topic of VPN will quickly find information stating that even the Opera browser offers a VPN capability. That is true but often fails to mention that this capability only allows for VPN within the browser and that the speed leaves much to be desired. Those who want a VPN connection for all of their activities on their Windows, Mac, iOS or Android system, however, need a VPN solution for private purposes.

VPN: hidden tunnels into the Internet

In layman's terms, the technical workings of VPN can be quickly summarized: Normally the Internet connection goes from the PC or mobile device to the Internet provider, who queries the relevant servers on the web and then delivers the requested data and websites to the PC or user device. The device is thus officially present on the net. Each website and each server knows the IP address to which it delivered the desired data. If somebody illegally analyzed all of this data, one could quickly put together a profile of the user.

Using VPN software makes analysis extremely difficult to impossible. As soon as the VPN software has been launched, all of the user's requests and queries first go there. Now it uses the normal Internet connection, but it has its own intermediary server. It first collects the desired files or web content from there and delivers it back to the user. All the servers or website thus identify a VPN service as a retriever of data – the user remains hidden and mostly anonymous behind the VPN service.

Techies naturally know that this explanation of VPN is a gross simplification. They also belong to the group who in a test are interested in every bit and byte of speed or additional technical features. For these readers, the test lab prepared an additional pdf file with lots of individual data from the tests.

Performance test: this is how fast VPN software is

Despite VPN in a secure tunnel: the transfer rates are always quite good with Kaspersky and Norton, which means that videos can also stream via VPN without juddering 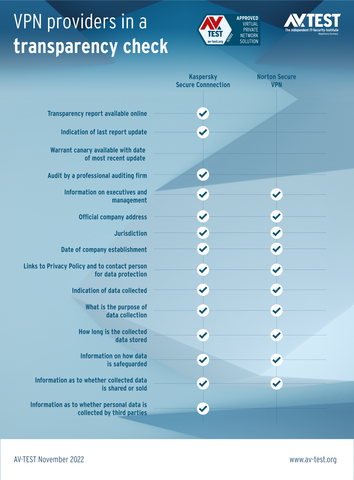 Can you trust VPN suppliers?

Kaspersky and Norton are well positioned in terms of transparency and trustworthiness: They name contact persons and clearly state the data they collect or store 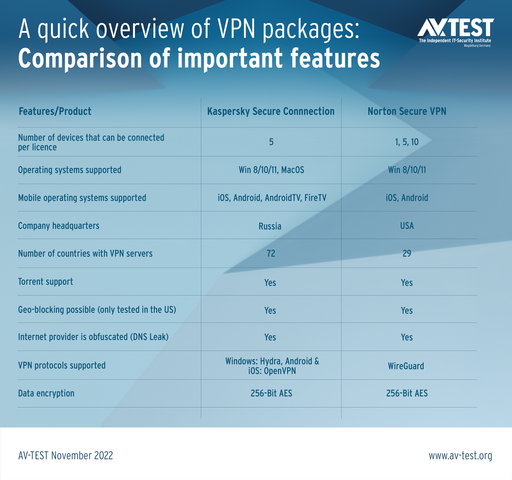 A quick overview of VPN Software

Performance test: this is how fast VPN software is

Can you trust VPN suppliers?

A quick overview of VPN Software

VPN software in the test lab

In the latest test, the two following packages show all they have to offer:

The testers had a look at the performance of the VPN packages in the lab. The focus was naturally on speed of accessing local or worldwide websites and services on the Internet. In addition, the lab took a look behind the scenes to see how the manufacturers understand the concept of transparency and how they handle user privacy.

Unlike other tests, however, the lab did not award traditional points. The products were required to fulfill various standards, and they then received the recognition "Approved Virtual Private Network Solution". In this test, both products received this recognition.

First there was a check in terms of the speed offered by the VPN software in many areas. As part of this process, the lab checked to see how quickly files could be downloaded and uploaded, whether large videos streamed smoothly or were prone to juddering, along with ping and latency times to gaming servers. An additional test also showed the transfer speeds via so-called torrent networks. And because this locally logged data with servers in Europe was not deemed sufficient by the testers, the entire test was repeated with servers from overseas. Connections were evaluated from Europe to Asia, from Europe to the United States, from USA to Asia, and all pairings were repeated in the opposite direction.

The table "Performance Check" quickly reveals the findings. But because many readers often have difficulty interpreting the results in kilobytes as good or poor, it only lists the values of 1 to 3. In this case, 1 is the lowest value, 3 is the best, and 2 is average performance, as seen with many products in the market. To point it out again: those seeking to know the precise number values in bits and bytes will find them in the additional technical pdf on the test.

The numbers in the table quickly show that both products have a well-developed infrastructure in the background. Especially locally, i.e. when the servers are located on the same continent, the results are excellent. For Norton and Kaspersky, there was a maximum score of 3.0 in terms of downloads. Kaspersky even managed to achieve the top score for the uploading of data, whereas Norton had a good result of 2.7. The latency values are also excellent for both VPN products.

When the services are overseas, for a connection from Europe to Asia, for example, then the data throughput is generally somewhat slower. Kaspersky was able to maintain its 3.0 for downloads, whereas Norton was in fact somewhat slower with 2.0. For uploading, it was the other way around: Norton 2.1 and Kaspersky only 1.4. After the test, Kaspersky examined why this value was so conspicuously low, and according to the company, it pinpointed and also fixed the bug. The latency is equally good for both products: 2.0. 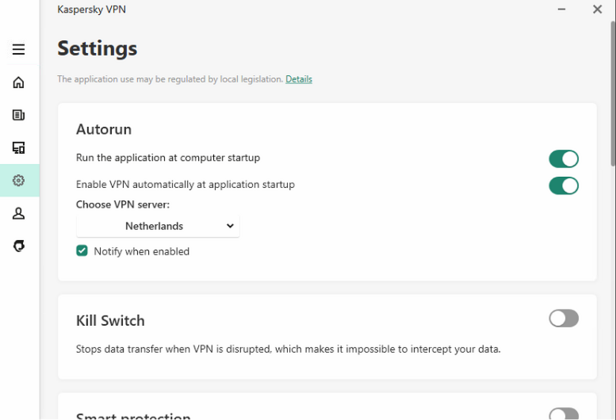 If desired, Kaspersky launches its VPN tool automatically for each connection and begins in the Netherlands as its Internet starting point 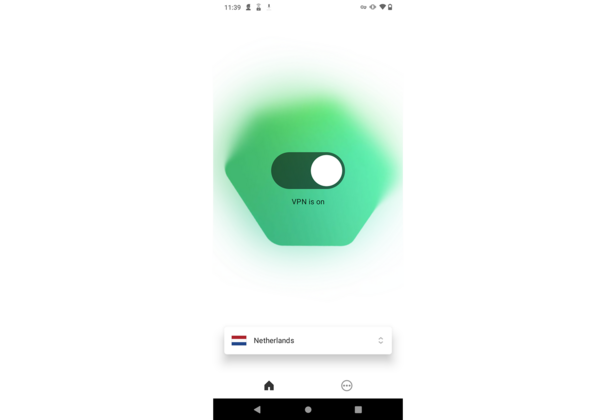 Once it is activated, the data traffic – as configured here – runs under Android completely over Dutch servers

Those wanting to transfer data per torrent network can rely on both programs. With one difference, however: For Kaspersky, Torrent is simply a program that you launch and use via VPN. You can freely select the country.

With Norton, you have to connect for torrent sessions via a menu with prepared torrent servers. The user doesn't know where they are. That is why the lab was unable to test this item for Norton. With Kaspersky, transfer per torrent was very fast: Locally, the value was around 2.9, and overseas it was around 2.7 out of 3.

How fast did videos stream via VPN? This is interesting, as so-called geo-blocking can also be bypassed via VPN. If a video in the United States can only be viewed by users in the USA, then you simply select as your VPN starting point an American VPN server, and voilà, you're an American user. Videos are in fact only downloads, but the lab tried nonetheless to see what quality is possible via VPN. In the test, even 4k films streamed smoothly.

Kaspersky and Norton use different VPN protocols for their products. Under Windows, Kaspersky relies on the fast Hydra protocol, and for iOS and Android apps, it uses the tried-and-trusted OpenVPN. It often tends to be somewhat slower, but it is usually more stable.

Norton uses under Windows, iOS and Android the relatively new protocol Wireguard. It stands for fast connections, but in the test for speed, it only stood out slightly in the category of overseas data.

For gamers, the latency figures recorded in the test are very interesting. Because they determine the so-called ping times, which translate into reaction time in games. If the ping is too slow, players can react as fast as they want – their reaction doesn't get through. But Kaspersky and Norton can also be recommended for gamers, as both have very good latency values, even if the game servers being used are located overseas.

In terms of transparency and confidentiality, the manufacturers of both products are reliable partners. The corresponding transparency table quickly reveals that Kaspersky and Norton take the privacy of their customers seriously. It also indicates that both companies do not collect more data than necessary, they publish privacy policies, and they name data protection officers in the corporation. Kaspersky even always publishes a transparency report.

With the help of this information, each user can make their own assessment as to whom they wish to trust in terms of VPN. 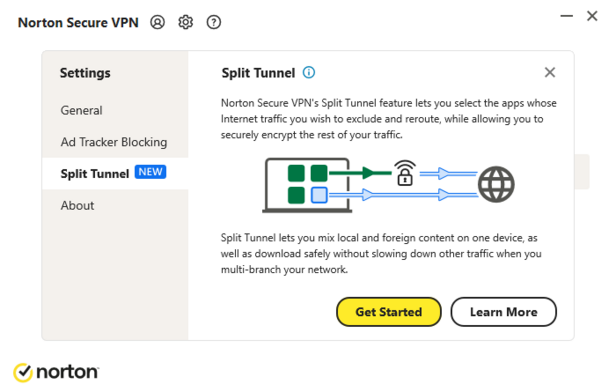 With Norton, you can even specify individual applications that when VPN is active do not run via VPN – and others that do 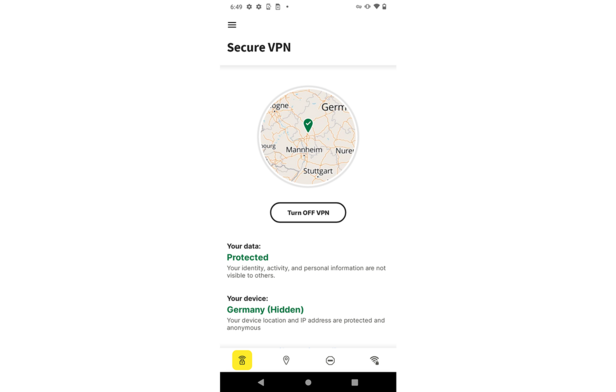 Whether accessing Wi-Fi when out and about or using home banking: The VPN packages use tunnel protocols combined with data encryption. Both products utilize secure AES 256-bit encryption.

Good to know: How many devices are covered by the license? Kaspersky makes things easy and allows up to 5 devices. With Norton you have to decide when making the purchase whether you want to use VPN for 1, 5 or 10 devices.

The possible use scenarios are also very different due to the usable operating systems. Norton Secure VPN is available for Windows, iOS and Android. Kaspersky Secure Connection is somewhat more flexible in this regard, as it can also be used with routers, MacOS, AndroidTV and FireTV.

The good news: The VPN packages from Kaspersky and Norton deliver solid performance data in all categories, are configured transparently, and protect the privacy of their users. For this, they receive the recognition "Approved Virtual Private Network Solution".

The performance data measured in the lab is quite similar with just a few exceptions. Thus, Kaspersky is indeed faster than Norton in overseas data transfer when downloading, but Norton is in turn faster for uploads overseas. In daily use, the products hardly differ at all. Those who want to perform their downloads per torrent can indeed use both products, but with Norton there is no free country or server selection. There you have to use the pre-configured servers. With Kaspersky, there is a somewhat easier solution.