Which option provides better protection for your company PC: the protection solution from Microsoft supplied with computers as a server/client package or a product from a well-known security software manufacturer? The laboratory experts at AV-TEST recently compared 8 current client security packages for business computers with the basic protection provided by Microsoft. 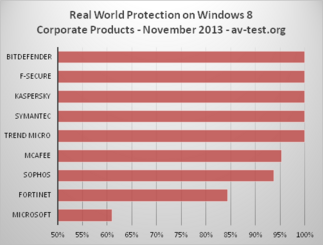 In the first and most difficult section

of the test, the real-world test, all of the products had to detect and fend off unknown malware for two whole months.

Microsoft is currently recommending that both its home and business customers immediately switch to the latest version of Windows 8 once it stops providing support for Windows XP. In response to this recommendation, the experts at AV-TEST decided to include the office solution System Centre Endpoint Protection from Microsoft in their test comparing 8 different client endpoint security solutions. 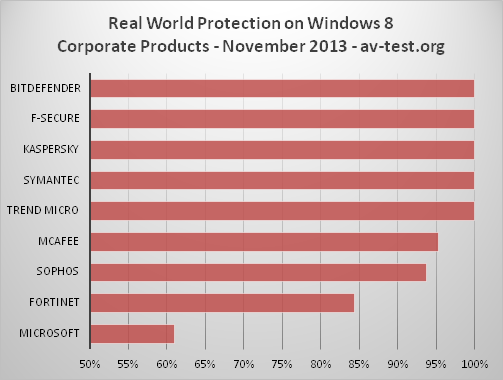 After the second month

of the real-world test, the results revealed that only 5 of the 9 corporate solutions tested were able to identify 100 percent of the unknown malware, namely those from Bitdefender, F-Secure, Kaspersky Lab, Symantec and Trend Micro.

for office PCs from Bitdefender and Trend Micro almost scored the maximum overall total of 18 points (in the AV-TEST Client Security Test November/December 2013). 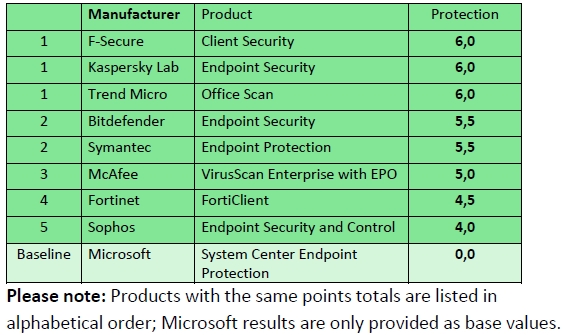 After the second month

An Investment or Basic Protection?

Network PCs at companies are protected by means of an installed client that works together with the endpoint security solution used by the company in question. The Microsoft management suite System Center 2012 comes with the Endpoint Protection 2012 module, which cannot be purchased separately. Although the solution was included in the test carried out by AV-TEST, its results were only used to enable a comparison between security software available to purchase and the free basic protection.

The results of the test reveal a clear outcome, with not one, but two solutions scoring 17.5 of a maximum possible of 18 points in the overall result, while the basic protection provided by Microsoft was unable to achieve any better than a total of 11.5 points.

The Best Protection against Unknown Malware

The hardest part of the tests carried out by AV-TEST is the so-called "real-world test", which requires every security package to detect and fend off over 100 pieces of brand-new and still unknown malware. The fact that this test always takes place over a period of two months means that all test candidates have to overcome this obstacle not once, but twice. Some of the results obtained in this section of the test are sobering, for example in the case of the basic protection from Microsoft, which recorded a rather meagre detection rate of 77 percent.

Five protection packages, however, achieved a clean sweep during this stage of the test with a detection rate of 100 percent, namely those from Bitdefender, F-Secure, Kaspersky Lab, Symantec and Trend Micro. These were followed by the products from Sophos and McAfee with rates of 96 and 95 percent respectively, while the solution from Fortinet was only able to detect 92 percent of the malware tested.

Security software manufacturers register hundreds, if not thousands, of examples of new malware every day. The protection suites are also expected to be able to detect these pieces of malware that have already been caught in the act. The laboratory tests their ability to do so by using the AV-TEST reference set, which contains nearly 20,000 pieces of known malware. All of the packages tested should be able to detect and fend off these malicious attackers. In this section of the test, the basic protection from Microsoft achieved a detection rate of 90 percent. The products from Bitdefender, Sophos and Symantec were able to detect 99 percent of the known malware and the rest of the products tested, namely those from Fortinet, F-Secure, Kaspersky Lab, McAfee and Trend Micro, even managed to identify 100 percent of the malware in the reference set.

The results of this section of the test were also a summary of the products’ performance over a period of two months.

Most company PCs tend to be used for years on end. Their performance normally worsens as they get older and it is therefore important that companies use a security solution that not only protects their client, but also has the lowest possible load on the system.

The test carried out by AV-TEST revealed that the protection packages from Bitdefender, Trend Micro and Kaspersky Lab are the kindest to systems’ existing resources. The solutions from McAfee and Sophos have a slight load on systems, while the protection package from Fortinet even has a very high system load.

Although the basic protection from Microsoft achieved a good result in this section of the test due to its low system load, this wasn’t enough to make up for its poor malware detection rate.

Barely Any Disturbances in Day-to-Day Use

Protection solutions that constantly display false positives or incorrectly block websites are not only unsettling for a company’s employees, but also lead to a significant increase in the number of support requests sent to the company’s administrator.

To put it in a nutshell, all of the solutions achieved almost perfect results in this section of the test. Two solutions scored 5.5 points and seven products were even able to achieve the maximum total of 6 out of 6 points.

Summary: Investing in Security Software Leads to a Huge Increase in Protection for Company PCs

The overall result clearly shows that investing in an additional protection solution is well worth the money. When assessed solely on the basis of the important malware detection category, the best products in the test were those from F-Secure, Kaspersky Lab and Trend Micro, all of which scored the maximum total of 6 out of 6 points. The basic protection from Microsoft fell short of the mark, failing to score even one single point.

In terms of all three test categories - namely "Protection", "System Load" and "Usability" - combined, the products from Bitdefender and Trend Micro scored an impressive total of 17.5 of 18 possible points.

These solutions were very closely followed by the security program from Kaspersky Lab, which was one point away from scoring the maximum possible total due to its slightly larger system load.