Put to the Test: 19 Android Security Apps for Consumer Users and Corporate Users

The number of mobile threats for Android is growing daily. As the standard protection measures from Google are not sufficient, a good security app ought to be on duty on every consumer or business Android smartphone. AV-TEST examined and evaluated 19 security applications for mobile Android devices in the lab. For many apps, the results could not be better, but for Google standard protection in particular, the findings can be labelled as mediocre. 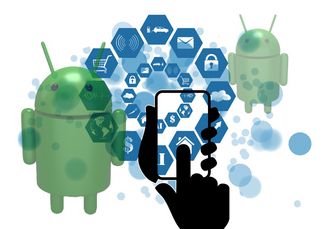 for consumer users and corporate users

If cyber criminals attack a mobile device, the object is often not to steal the data but to harness the computing power of the mobile device, with the aim of using it as a bot, for example. After all, mobile devices are generally available 24/7. Thousands of such bots are then put to work, pinging websites, for example, and overloading them during a DDoS attack. Naturally, that is only one sample scenario of what attackers can do with a mobile device. There have also been targeted attacks with ransomware on corporate devices, as they often offer connectivity to corporate networks – an additional "door" for an attack.

But all these horror scenarios can be prevented with extremely high probability using security software for Android devices. That is why the laboratory of AV-TEST tested 19 protection apps for Android in terms of their protection, performance and usability, along with other functions. Three of the apps are intended for corporate users, the additional 16 for use on consumer smartphones and also on devices in small enterprises.

19 security apps put to a test in the lab

Every security app is required to pass three major test phases: protection, performance and usability. In the test of apps for corporate users, the evaluation table shows the products from Dr.Web and Total Defense compared to Google Play Protect.

Among the security applications for consumer users, the lineup of apps included AhnLab, Avast, AVG, Avira, Bitdefender, F-Secure, G DATA, Google, Ikarus, Kaspersky, McAfee, Norton, Protected.net, securiON, Sophos and Trend Micro. 12 of these apps concluded the test with the maximum score of 18. Two other applications came in at an excellent 17.5 and 17 points.

Among the apps for corporate users, the security solution from Total Defense came in best with the maximum achievable 18 points. The app from Dr.Web followed with what was still a good result of 16 points. The protection service Google Play Protect, included for comparison, was only able to muster 14 points. 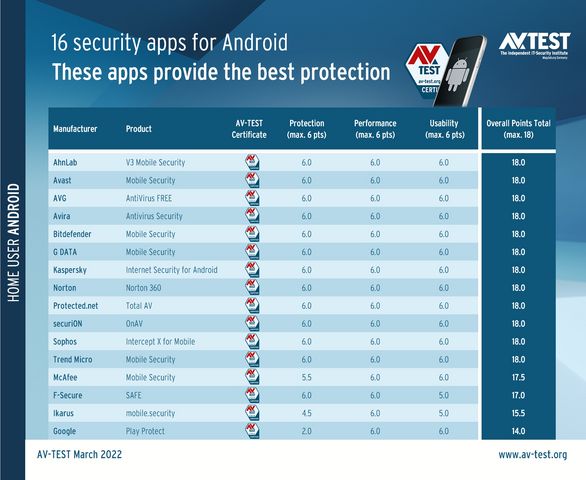 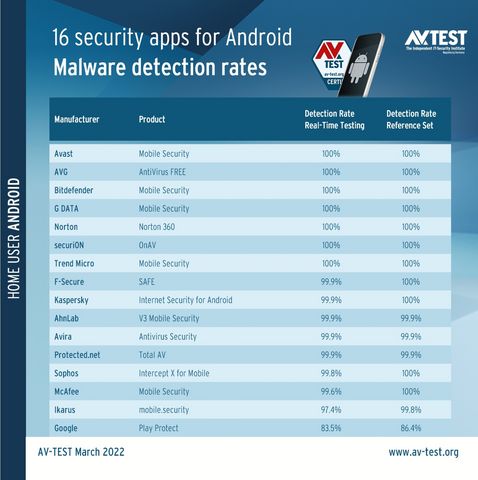 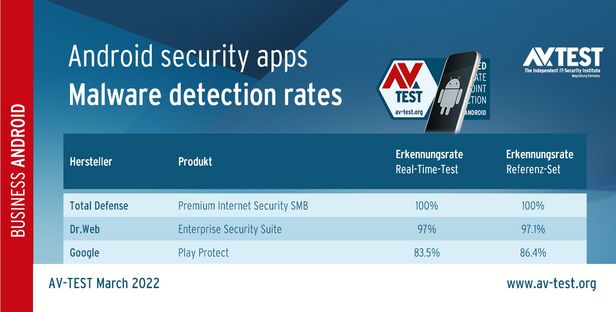 The app solution from Total Defense detected all attackers 100 percent in the test – Dr.Web came in a close second

Each security app evaluated in the test was required to demonstrate its protection against malware apps. To do so, the lab deployed two test phases: the real-time test with over 3,000 newly collected infected apps. In addition, the lab used 2,800 malware apps as a reference set, as these were already in circulation for up to four weeks.

Among the security apps for corporate users, Total Defense detected all the attackers 100%. The solution from Dr.Web had slight detection problems in both phases: only 97 and 97.1 percent respectively. The pre-installed Android protection service Google Play Protect, also evaluated for comparison, made a lackluster showing with 83.5 and 86.4 percent detection respectively.

The additional security apps from F-Secure, Kaspersky, AhnLab, Avira, Protected.net and Sophos were only almost perfect. They committed very minor errors in the tests. The apps from McAfee and Ikarus committed a few more and lost important points. The Android protection service Google Play Protect was the weakest in terms of detection, achieving only 83.5 and 86.4 percent respectively.

A good protection app does require a few system resources for its work. This system load, however, should be as low as possible, as lots of computing power also costs precious battery power and thus runtime as well. In addition, a security app should feature a low overhead of data in the background.

The result for all the apps evaluated was excellent – both for corporate users and for consumer users. None of the apps attracted negative attention in the test. That's why all the protection programs for Android received the full point score of 6 in the category of performance. 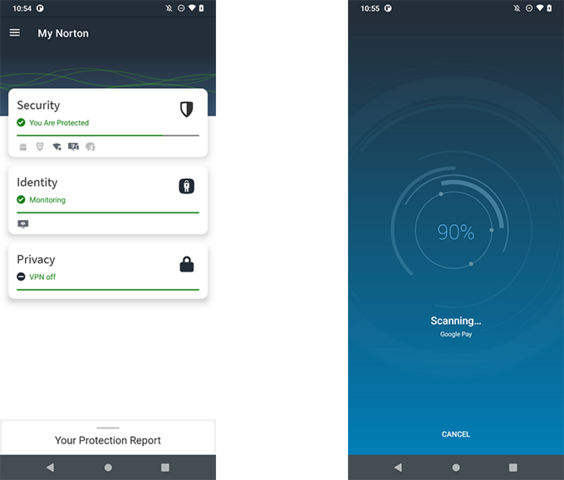 The app worked error-free throughout all the tests: earning the full 18 points 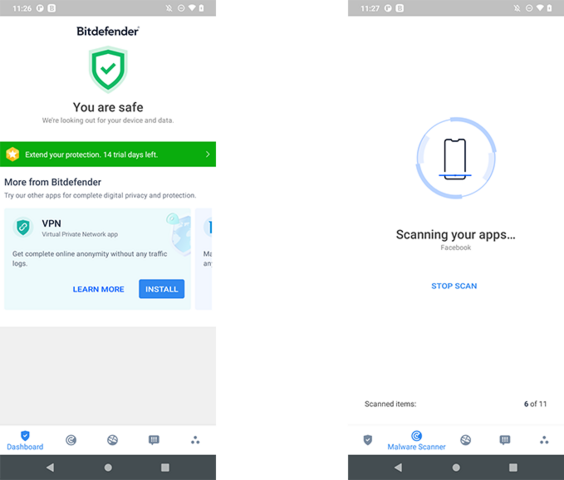 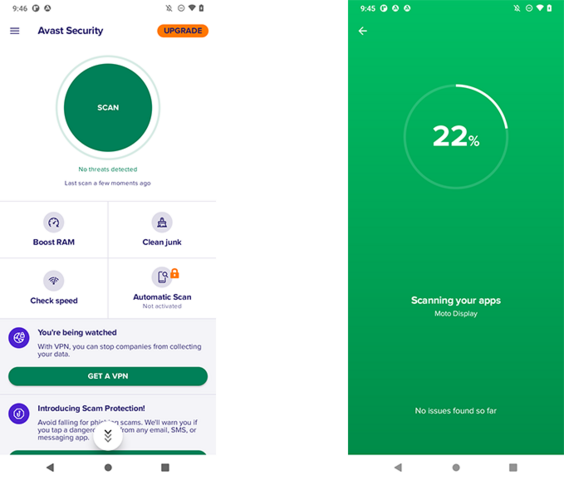 The security app earned 18 points in the test, thus achieving the maximum result 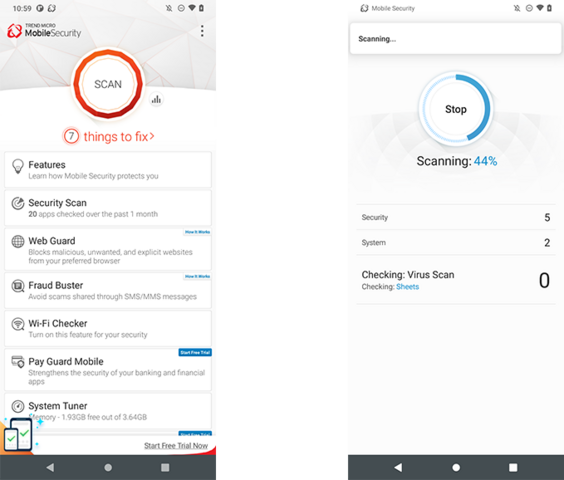 The protection program for Android completed all the tests error-free 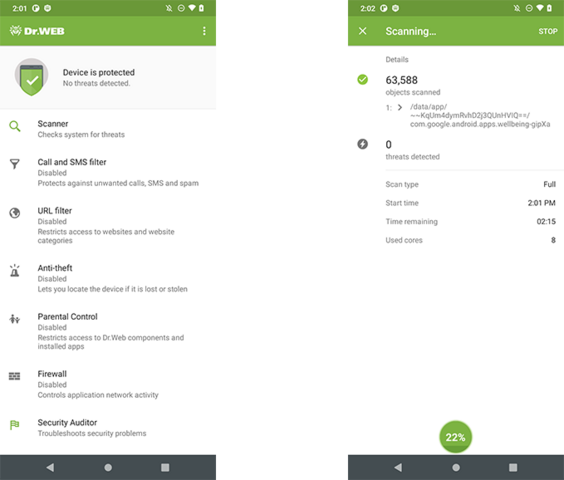 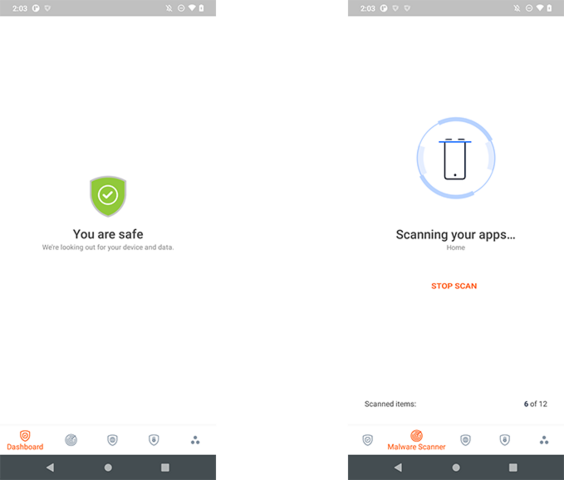 In the test category of usability, the lab examined whether the protection programs detect normal apps as being harmless or classify them improperly as attackers. For this, the lab loaded and installed thousands of harmless apps onto devices with an installed protection app.

Among the protection solutions for corporate users, there were no false alarms. That is why all the products received the full 6 points.

Among the protection apps for consumer users, false alarms only occurred sporadically. Only the apps from F-Secure and Ikarus had one point taken off as a result: 5 points. All the other apps examined received the full 6 points from the testers.

The current test data underscores the good results for the security apps. Companies should not rely on the protection service Google Play Protect under any circumstances. The detection rate of apps infected with malware is too low. This is also reflected in the overall point score of 14 out of 18 possible points. More advisable here are the mobile protection solutions from Total Defense achieving the maximum point score of 18 and with only slight deductions the solution from Dr.Web which did achieve a good 16 points.

Among the protection apps for consumer users, there were also excellent test findings, offering users a wide selection. Because 12 of the 16 apps evaluated garnered the maximum attainable 18 points. Two others came in at an excellent 17.5 and 17 points. While the app from Ikarus only reached 15.5 points, it still managed to outperform the Google service Play Protect. It only received 14 points for its achievement.

Consumer users ought to take a look at the extras offered by protection apps. The testers list them, but do not evaluate them separately. Some apps offer additional tools for protecting private data more effectively, for example, small Wi-Fi testers, and also VPN or backup tools. On some apps, however, these functions are only available in the premium version, as they involve licensing fees.