25 Internet Security Suites Are Put to the Test Using Windows 8.1

According to Microsoft, Windows 8.1 is already equipped with good tools for increased protection when installed on PCs. The latest test carried out by AV-TEST, however, shows that these tools are insufficient. Only by using an additional protection package can you be sure that your system has the right defence mechanisms, especially when it comes to detecting brand-new and therefore unknown malware. 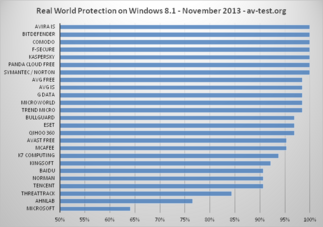 In the real-world test

all 25 test candidates were examined in terms of their ability to detect unknown malware when used with Windows 8.1. The test was carried out over a period of two months and the results from November 2013 are displayed above.

The laboratory experts at AV-TEST spent two entire months bombarding the new Windows 8.1 systems with both known and brand-new malware. The protection package installed on each system certainly had its hands full when dealing with this onslaught of attackers. After all, each package was expected to detect and fend off nearly 20,000 pieces of new and known malware. The main focus of the test was the security solutions' ability to detect malware that is still unknown but lying in wait ready to attack all over the Internet. The system guardians that were able to successfully pass this so-called "real-world test" are those worthy of your trust. 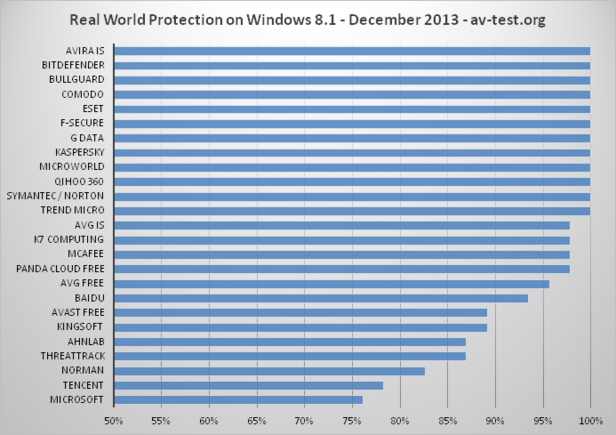 In the second test month

of the real-world test, December 2013, all 25 test candidates again had to prove how well they were able to detect unknown malware (in the AV-TEST Desktop Package Test November/December 2013). 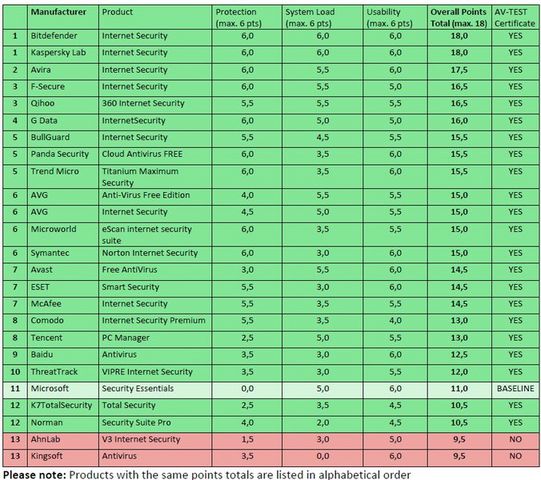 were able to score the maximum total of 18 points, namely the solutions from Bitdefender and Kaspersky Lab. The best free protection package couldn’t manage any higher than 5th place (in the AV-TEST Desktop Package Test November/December 2013). 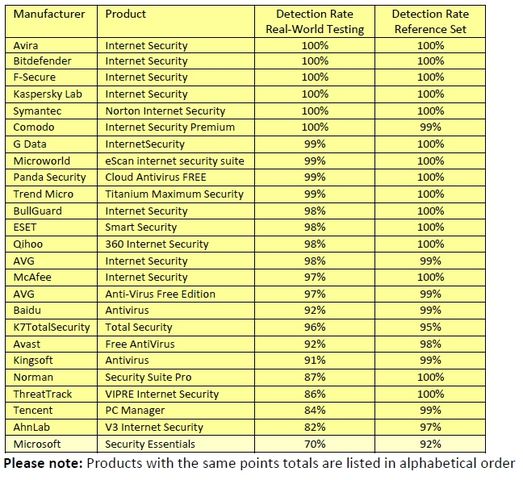 recorded in the real-world test are particularly important because they show how good the protection packages are at detecting malware that is still unknown. The results displayed above were collected during a test period lasting two months (in the AV-TEST Desktop Package Test November/December 2013).

In the second test month

The Best Protection Packages in the Real-World Test

The new Windows is equipped with good system tools such as Windows Defender, the Windows Firewall and the Internet Explorer smart filters, all of which are actually supposed to provide the system with good basic protection. The AV-TEST laboratory therefore included the pure Windows solution as an example of basic protection in order to improve the comparative value of its test results, using the results of the Windows protection tools as a benchmark for the other 24 solutions tested.

In the real-world test, however, the basic protection from Windows was unable to achieve a particularly high score and actually came in at last place with a detection rate of just 70 percent.

The protection packages from Avira (purchasable version), Bitdefender, F-Secure, Kaspersky Lab, Symantec and Comodo all managed to detect 100 percent of the malware involved in this test.

These solutions were closely followed by the packages from G Data, Microworld and Panda Security (Cloud Antivirus Free) with a detection rate of 99 percent. The protection package from Panda is therefore the best free solution both in terms of detection and in the overall table of results produced at the end of the test.

The complex real-world test required all of the protection packages to fend off the newest malware around, from websites, e-mails, downloads or drive-by downloads, just like they may be expected to do during the day-to-day use of e-mail and the Internet.

The first stage of this test involved confronting each protection software package with the infected files. The system guardians then used a multitude of internal defence mechanisms to detect the malware attackers. The mechanisms used by the solutions ranged from classic scans through to behavioural detection and right through to special detection measures. If a product failed to detect a piece of malware and instead allowed it to spread, the test registered this failure and restarted the infected system, using the same procedure with the next piece of malware.

After getting through the most difficult stage of the overall test, the test candidates then had to complete what could be referred to as a compulsory exercise, namely detecting the over 19,500 known pieces of malware in the AV-TEST reference set, which had been collected in the 4 weeks leading up to the start of the test, in one test run. In theory, all packages should be able to detect this malware. In practice, however, this was unfortunately not the case. While 15 of the 25 packages tested were able to achieve a clean sweep of 100 percent, 9 packages were only able to detect 95 to 99 percent of the malware and the Microsoft package recorded a basic value of just 92 percent.

Five of the system guardians that detected all of the malware involved in this stage of the test also achieved a detection rate of 100 percent in the first section of the test, the real-world test, namely the solutions from Avira, Bitdefender, F-Secure, Kaspersky Lab and Symantec. Although the protection package from Comodo achieved 100 percent in the real-world test, it stumbled in the second part of the test and only recorded a detection rate of 99 percent.

Protection packages that do a good job but slow down Windows systems whilst doing so are quickly shown the door by users. An example of such a package in the test carried out by AV-TEST was the solution from Kingsoft, which was the worst test candidate when it came to slowing down the system whilst surfing the web, loading downloads, installing and launching software and copying files and was therefore awarded 0 of a maximum possible total of 6 points.

The solutions from Bitdefender, Kaspersky Lab, Avast, AVG, Avira, F-Secure and Qihoo, on the other hand, were barely noticeable during day-to-day use and therefore achieved totals ranging from 5.5 to 6 out of 6 possible points.

The basic value of the basic protection from Microsoft in this section of the test was 5 points.

In the tests carried out by AV-TEST over the past few years, the system guardians tested displayed false positives whilst surfing the web time and time again. Even programs that had already been installed or their actions were often classified as malicious attackers and correspondingly blocked, which is certainly annoying.

In this test, all 25 participants therefore had to visit 500 websites, support over 40 program installations and, last but not least, scan nearly 750,000 files and correctly identify them as clean and uninfected. The security solutions definitely earned some kudos in this part of the test, with 22 of the 25 protection packages tested either making no mistakes whatsoever or only recording very minor errors and therefore being awarded 5.5 points or even the maximum total of 6 points. The solution from Comodo was the only software to have points deducted due to programs being blocked and therefore only ended up being awarded 4 out of 6 points.

The free protection packages involved in the test have done a better job in the past than was the case this time round. In the overall ranking, the free software versions from Panda, AVG and Avast came in at 5th, 6th and 7th place with totals of 15.5, 15 and 14.5 points respectively but were a long way off from the maximum possible total of 18 points. The most alarming thing about these solutions, however, was the detection performance of the free versions from AVG and Avast, which only achieved scores of 3 and 4 of a maximum possible total of 6 points in this category. The package from Panda was the only free solution to deliver a better performance.

The suites from Bitdefender and Kaspersky Lab achieved the maximum points total in all test categories and therefore boast an overall total of 18 points, closely followed by the purchasable version of the Avira software with a total of 17.5 points.

Although the basic package from Microsoft came in at 11th place, it was far from successful when it came to setting benchmarks in terms of protection and detection. In fact, the AV-TEST testers evaluated the package's performance in this category with a meagre total of 0 out of 6 possible points.

22 of the 25 protection packages involved in the test were awarded the AV-TEST certificate for tested security. The Microsoft results were used for comparative purposes only and the products from Kingsoft and Ahnlab failed the test due to their overly weak performance in the "Protection" category.