January 14, 2020 is the day: Microsoft will retire Windows 7 and Office 2010 without fail. That is also the day when extended support will end. At least for consumer users, it will be the end of the road. Corporate users can still buy a reprieve. 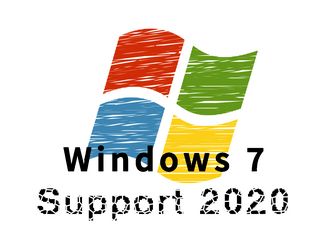 January 2020 will see the end of Windows 7 support

Already in January 2015, Microsoft sounded the initial warning bell, as that month marked the end of regular support for Windows 7. In just one year from now, January 14, 2020, the large final gong will sound, ending even so-called extended support. After that date, there will be no more updates for bug fixes, for more security, or for internal Microsoft applications. For private users, the installed security suite will be required to take over the entire protection task from that point on. Corporate users will have it a bit easier, as they will be able to purchase another 3-year support package. Microsoft is offering the so-called Extended Security Updates (ESU) until January 2023. There are no official prices on this.

Office 2010 is also at the end of its life cycle

Incidentally, Microsoft is also sending Office 2010 into retirement. There will be no further updates after October 2020 for that application either. That doesn't sound terrible at first, but it is. Because in the past, there have always been critical vulnerabilities in Office products which hackers have exploited. The Office 2013 version is expected to be supported until 2023. The follow-up or update version, Office 2016, is currently being actively promoted at low prices. Switching over to Office 2016 or even to the new 2019 version is not quite as dramatic as changing an operating system.

Internet security suites will provide protection even after 2020

Most manufacturers of security packages will still support their version even after 2020. However, the security packages on an old Windows 7 system will be required to monitor for more and more security gaps over time. Those who wish to or have no choice but to keep using Windows 7 ought to refrain from using certain applications, because Internet Explorer, for example, will no longer be receiving any updates.

Especially an outdated Internet Explorer or a vulnerable Outlook will significantly increase the risk of a malware infection. Microsoft will probably discontinue support for Security Essentials in 2020 as well. At least, that was the procedure when support of Windows XP was ended.

That is why users ought to look closely at whether their PC is still suitable for Internet use after 2020. Sometimes an old Windows operating system is only needed because special hardware needs to be controlled or industry software will not continue to run otherwise. However, Internet access is usually not absolutely necessary in that case. 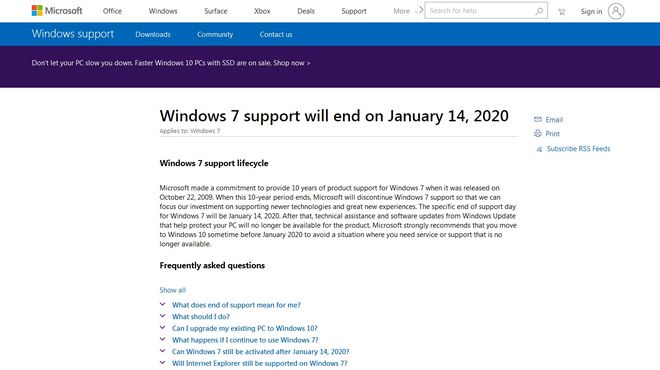 So how much time do the users have left?

Naturally, manufacturers of security software will not support the outdated Windows 7 forever. The procedure is expected to be similar to the discontinuation of Windows XP. The normal versions for consumer users were supported by most providers for at least 12 months. Some even offered additional updates for 24 months. For enterprise products, the phase is usually longer, as they often include special extended support.

Those who are unsure can always inquire with the manufacturer of their security solution.

Private users ought to consider switching to another operating system. Windows 8.1 is not recommended, however, as regular support for that system already ended in January 2018. The extended support also only continues until 2023. That is why consumer users need to accept the possibility of upgrading to Windows 10 where possible.

Update and support for Windows 10

Looking at the Windows lifecycle fact sheet on Microsoft's website and reading the item concerning the editions of Windows 10, it is confusing at first. Because Microsoft does not provide a specific end date for support. After each major update for the Home and Pro versions, which are always expected to be released in March and September, support will continue for another 18 months. The support period for the Enterprise and Education versions even runs a bit longer. If Microsoft adheres to its deadlines, then after the October 2018 update (version 1809), the new March or April 2019 update will be almost around the corner.

Thus: only those who always participate in the major updates, such as the Creators Update, will also remain in the support agreement. Those who don't install the updates will no longer receive support at some point.

On the large February 2019 Patch Tuesday – for all operating systems and Windows applications – there were notices concerning more than 70 new security vulnerabilities. Microsoft classified 20 of them as critical. These gaps are still being closed. As of January 14, 2020, the messages about Windows 7 and its internal tools will still keep piling up, but the gaps will no longer be closed. That will be the beginning of many attacks. The Hasso Plattner Institute's Database for Vulnerability Analysis, for example, identifies in 2018 alone more than 150 vulnerabilities for Windows 7.