The Best Protection Apps for Android in Spring of 2021

Smartphone processors have now grown so powerful that they are a juicy target for cybercriminals. Hijacked cell phones often toil in botnets or are put to work mining cryptocurrencies. A good security app protects against such attacks. AV-TEST tested 15 protection apps for home users. 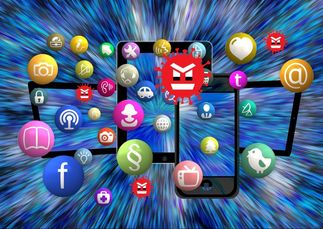 these are the best apps

Many modern smartphones utilize advanced 6- or 8-core processors, some of which are clocked at just under 3 GHz. These powerful packages are of interest to cybercriminals, as their performance even enables them to be used for "mining", i.e. generating hashes, for cryptocurrencies. That is why that latest smartphones are tantalizing targets for botnets. In these networks, criminals pool the processing power, forcing entire cell phone clusters to harness attacks or to calculate bitcoins or other cryptocurrencies.

Botnets are nothing to be afraid of

Once a smartphone has been protected by a good security app, however, users have little to fear that their device will be enslaved in a botnet. But they would do well not to rely on automatically available protection via Google Play Protect under Android. This is clearly demonstrated by the test, as the protection of Play Protect was also included for comparison. The laboratory of AV-TEST tested 15 protection apps for Android in terms of their protection, performance and usability – such as false alarms, for example. The test included the Android protection apps from AhnLab, Avast, AVG, Avira, Bitdefender, F-Secure, G DATA, Google, Ikarus, Kaspersky, McAfee, NortonLifeLock, Protected.net (Total AV), securiON and Trend Micro.

The result of the tests is proof of high-level security for users of Android smartphones: 10 of the 15 apps evaluated received the maximum attainable 18 points in the test. 3 additional apps still managed to achieve an excellent 17.5 points. One app scored 16.5 points. Only the standard protection Google Play Protect running on Android is really nothing to write home about: 6 out of a possible 18 points. 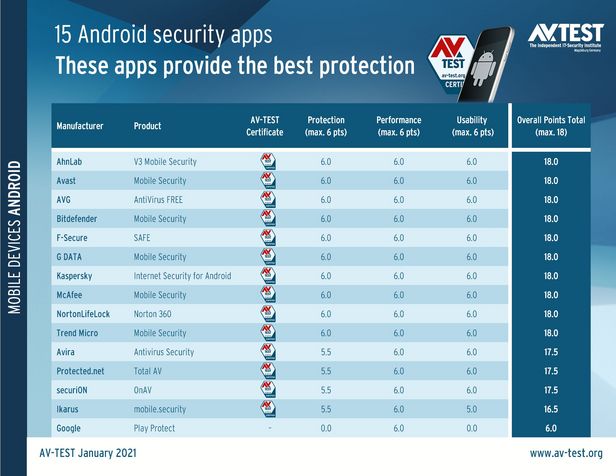 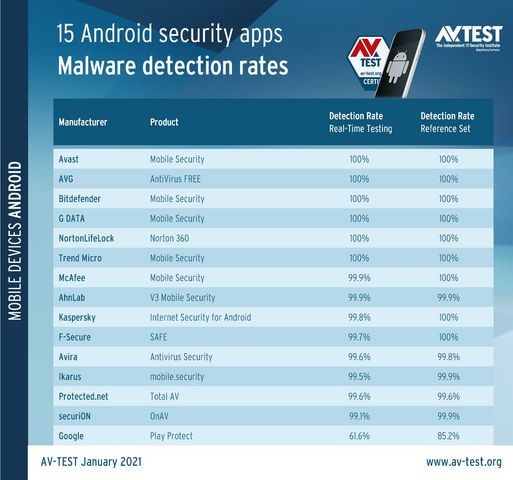 The malware detection rates of the apps

6 of the security apps examined detected all the threats in the test 100 percent, whereas 4 additional apps committed only minor errors

The malware detection rates of the apps

Strong protection against thousands of threats

The lab evaluates each security app for Android in terms of its protection. In the test, it is required to detect, block and quarantine a veritable deluge of infected apps. In the real-time test, the lab uses totally freshly uncovered malware apps – nearly 3,000 samples. In addition, the experts subject the Android devices to an onslaught of an additional 3,300 malicious apps, which have already been wreaking havoc on the Web for up to 2 weeks, however.

The apps from Avast, AVG, Bitdefender, G DATA, NortonLifeLock and Trend Micro each fulfilled the detection exercise 100% in both test steps. This was followed by the apps from AhnLab, F-Secure, Kaspersky and McAfee, committing minor errors in one or both tests. All of the apps mentioned received the full 6 points in the test category of protection.

The apps from Avira, Ikarus, Protected.net and securiON achieved between 99.9 and 99.1 percent detection in both tests. They still received good scores of 5.5 points. Only Google Play Protect cannot compete with any other app when it comes to detection: only 85.2 for known threats and 61.6 percent for fresh malware. This accounted for zero points.

Every Android protection app working in the background needs some processing power, battery power and data from the Internet. But just how much does each security app require? The lab examined these criteria as well and was able to give favorable ratings across the board. The use of the protection tools examined caused neither any excessive CPU load on the test devices, nor was much power required from the battery, and only little additional data was needed from the Internet in the background. For this economical use of system resources, all of the protection apps evaluated received the full 6 points. 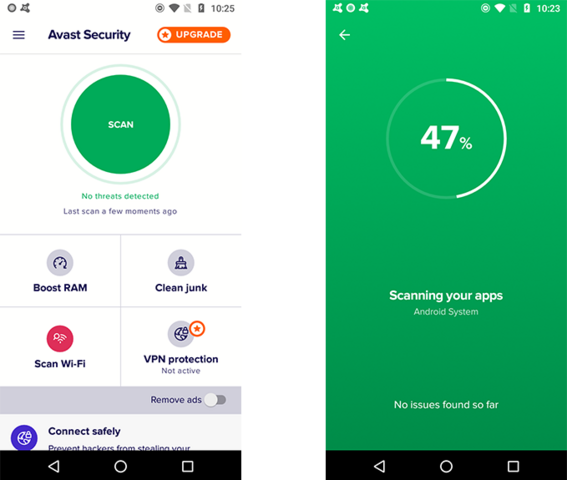 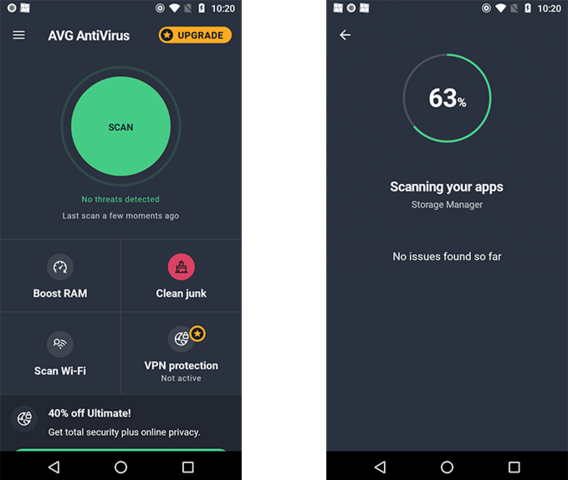 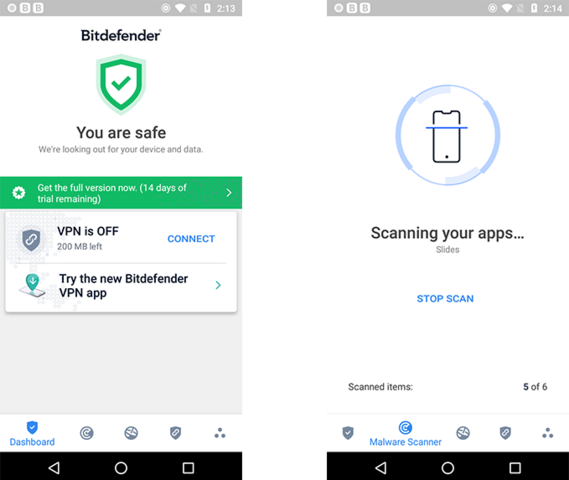 The error-free and very secure app in the test also stood out, in addition to 18 points, thanks to many extras, such as VPN 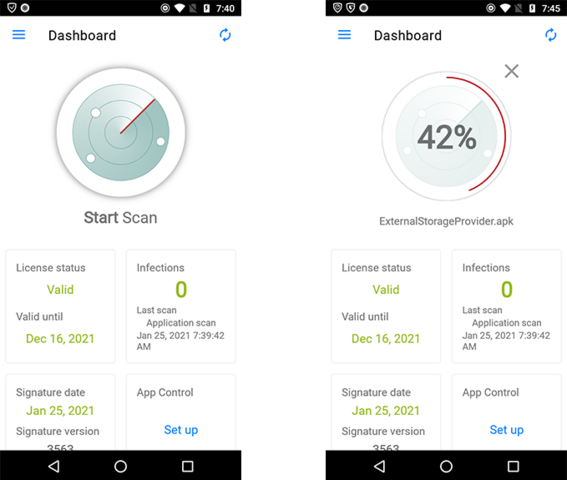 This security app finished the test with the maximum 18 points 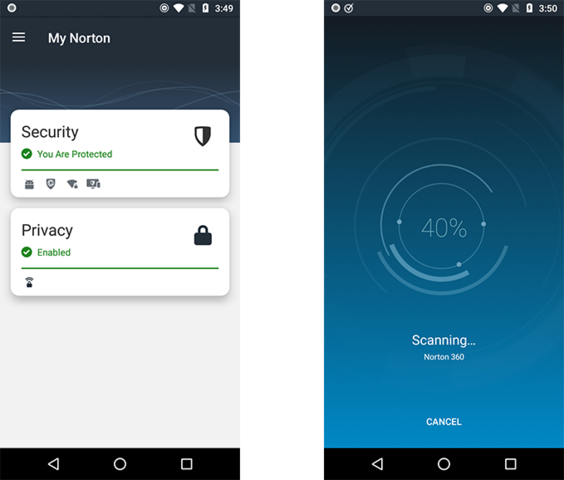 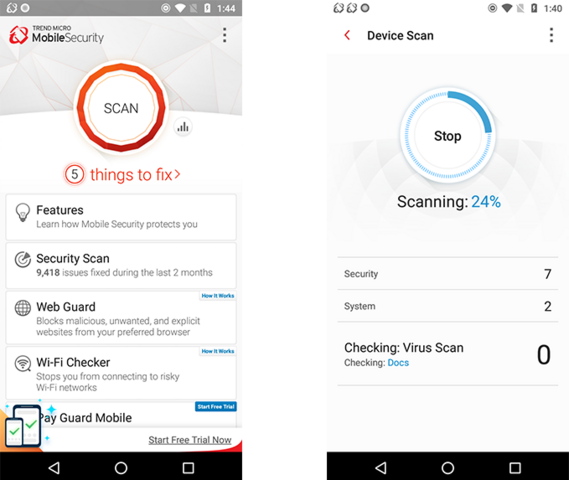 Alarm in the system

Although many users only download their apps from trustworthy app stores, alarms occur repeatedly that an app is infected with malware. So they should not be installed! But it is really annoying when the whole thing is based on a false alarm. That is why the laboratory checks whether the security apps can also truly distinguish the good apps from the bad. In doing so, the lab sends over 2,500 harmless apps from the Google Play Store to the secured devices. In addition, the lab uses an additional 1,200 apps from other app stores for the friend-foe detection. The perfect result: no alarm, as all the apps are harmless. 13 of the 15 apps achieved optimal results here and were thus awarded the full 6 points. The Ikarus app committed only a minor error with a single app. An interesting result: Google Play Protect wrongly classifies 7 apps from its own store and 24 apps from other stores as threats.

A security app is a necessity

Security app deniers like to argue that the apps will only eat up their battery life, and probably wouldn't find any dangerous apps anyway. The latest test demonstrates just how wrong these statements are! First: none of the apps tested placed a load on the Android system or used large battery resources. 10 of the 15 apps evaluated achieved excellent protection results and were thus awarded the full 6 points. And because these candidates neither reported false alarms nor put a load on the system, the lab awarded them the full 6 points 3 times, i.e. 18 points. They are the apps from AhnLab, Avast, AVG, Bitdefender, F-Secure, G DATA, Kaspersky, McAfee, NortonLifeLock and Trend Micro. Some of the protection apps mentioned can even be used free of charge.

Those prepared to spend a bit of money on an app with an annual licensing fee will benefit from the apps' many extra features. Just what those entail, for example, can be found in the article "The Best Extra Features in Security Apps for Android – What They Have to Offer!”