Cyber gangsters are relentlessly continuing their attempts to use fake and infected Android apps to take control of users’ mobile devices. Every user who wants to do away with the constant worry about such threats needs to find a good protection app for their Android device. These tools identify dangerous apps or their actions, protect user data, and ensure that control of the device remains in the user’s hands. In its lab, the AV-TEST team tested 16 security apps in a 6-month endurance test to determine which solution provides the best protection on Android systems. Here are the best endurance runners when it comes to Android security. 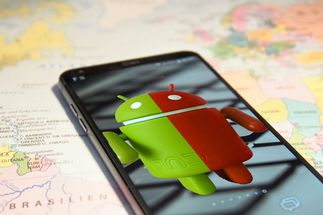 Be it a smartphone or a tablet, every unprotected device with an Android system is a worthwhile target for cyber gangsters. Such devices can, for example, be used for crypto mining or as part of an attack botnet, especially given that they are available round the clock. Attackers also like to capture smartphones to steal identities or use them for dark transactions. To achieve these goals, cyber gangsters provide clueless users with infected apps. Worryingly enough, such apps can often be found in app stores, even in the Google Play Store.

Users who cannot or do not want to have to decide whether each new app is a friend or a foe need to be able to rely on a good protection app for Android. But which option is the best? To answer this question, the AV-TEST team examined 16 well-known security apps for Android in its lab in a six-month endurance test conducted between May and October. Just like every test, the results revealed both highs and lows: while many security apps proved their worth as recommendations, Android’s standard security tool, Google Play Protect, only provided moderate protection. It therefore ended up second to last in the current endurance test.

The testers in the AV-TEST lab pushed all of the security apps to the absolute limit. In the vital protection test, the apps were required to identify more than 9,200 completely new, infected apps within a period of six months in the so-called real-time test. An additional test using the reference set expected the apps to filter out a further 9,400 malware apps that have been around for a while and to protect the device. 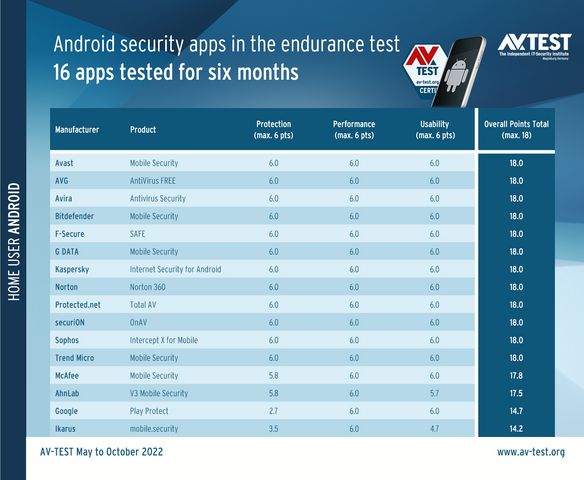 In the six-month endurance test, 12 of the 16 security apps examined garnered the maximum 18 points 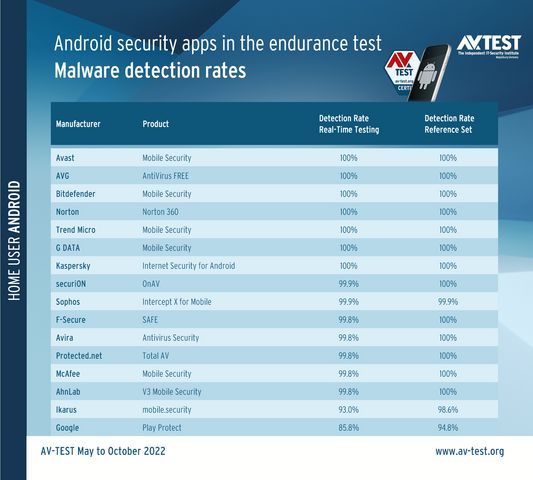 In the six-month endurance test, every protection app was required to detect and filter out more than 18,000 malware apps – 7 apps passed with flying colors, achieving 100 percent

All of the individual details are summarized in the detection rate table in the “Real-Time Testing” and “Reference Set” columns. In the tests, 7 of the 16 security apps examined achieved 100-percent detection in both test segments; Avast, AVG, Bitdefender, Norton, Trend Micro, G DATA and Kaspersky.

These are followed by the apps from securiON, Sophos, F-Secure, Avira, Protected.net, McAfee and AhnLab, which revealed a slight detection error but still achieved top scores of 99.9 or 99.8 percent.

The protection apps from Ikarus and Google came in at the bottom of the pack. Ikarus was at least able to score over 90 percent in both test segments, with results of 93.0 and 98.6 percent. Google’s standard protection, Play Protect, followed with moderate scores of 85.8 and 94.8 percent. In an example scenario, a detection score of 85.8 percent in the real-time test using 9,230 apps means that more than 1,310 of the apps would remain undetected and free to wreak havoc on the mobile device.

Not many users are willing to sacrifice a significant proportion of their battery life for a security app. The ideal solution would be an app that provides good protection but uses up virtually none of the battery power available. The lab tested each app to see how well it meets this specific requirement. This also involved precisely analyzing what the protection app gets up to behind the scenes: whether it makes the device run slower, downloads copious data in the background, or constantly puts a strain on the processor and therefore wastes battery power.

All of the security apps achieved perfect results in this area: even in the six-month endurance test, none of the apps used more power than necessary. As a result, every single app has been awarded the maximum of six points in the test category of performance. 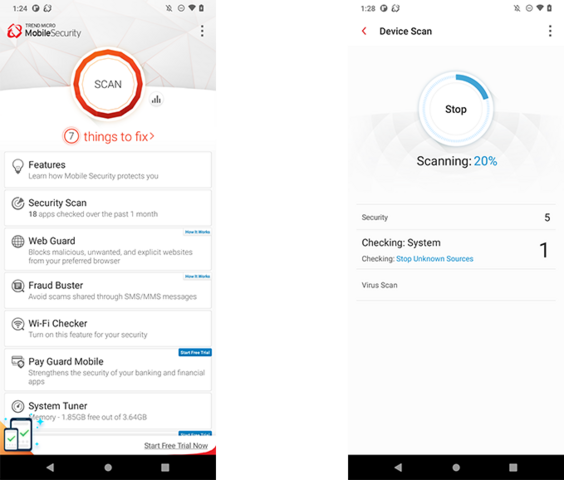 Continuous security in the endurance test: the app’s 100% detection rate translated to a top score of 18 points 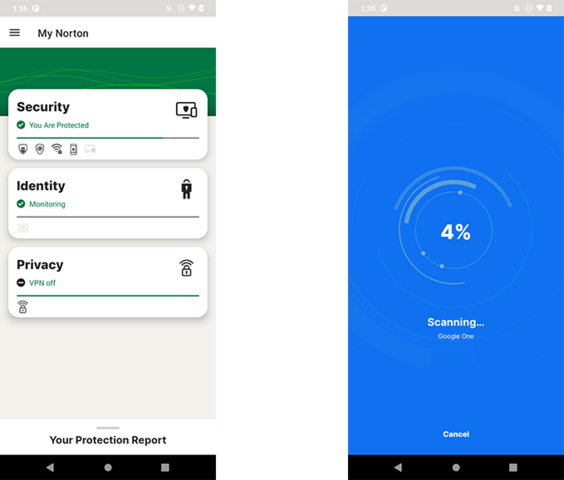 With no errors whatsoever in the entire endurance test, the Norton protection app achieved the full total of 18 points 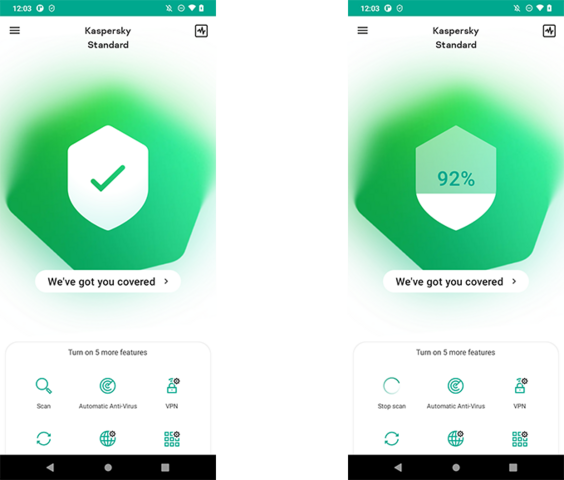 With consistent error-free detection in the endurance test and a strong performance, the Kaspersky app secured the full 18 points 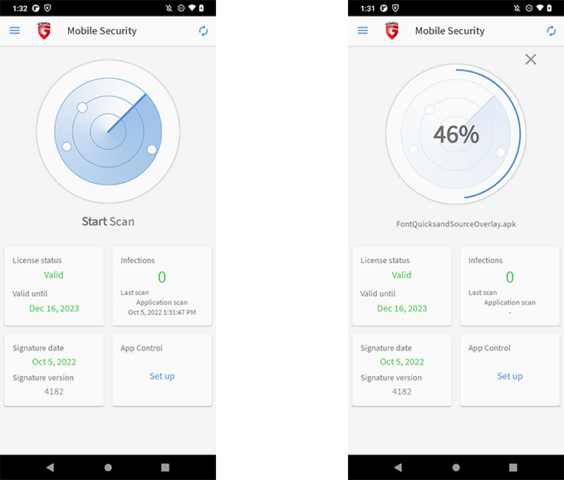 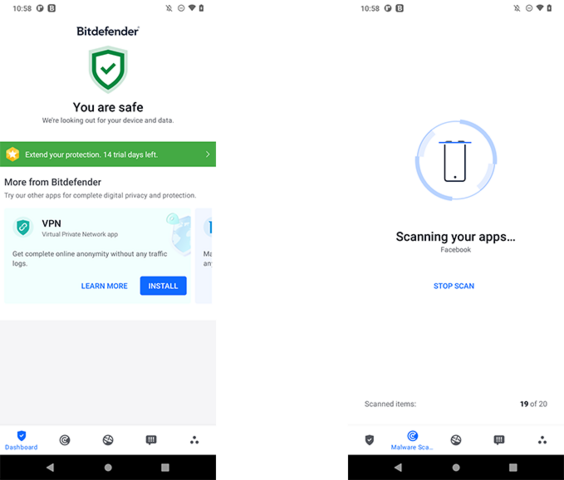 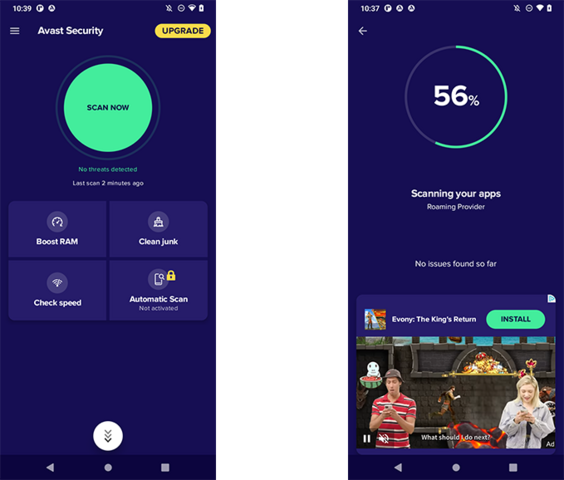 Security working discreetly in the background

Everyone can picture them: those burly bodyguards with dark sunglasses and an earpiece in one ear. They stand discreetly in the background and only become active when a genuine threat comes to light. A security app on a mobile device should work in a similar way. It needs to be able to distinguish whether an app is dangerous or harmless. To test this scenario, the lab installs nearly 10,000 harmless apps on the test devices. More than 6,000 come from the Google Play Store, and 3,500 more are downloaded from other app stores. When faced with these harmless apps, good security guards stay calm because there is no threat to report. Nearly all of the security apps did precisely this and were therefore awarded the maximum of 6 points.

Only the security apps from AhnLab and Ikarus reacted too nervously and warned against harmless apps time and time again in the endurance test. As a result, AhnLab only achieved a total of 5.7 points, while Ikarus even had to settle for a score of just 4.7.

Plenty of protection – even in the long term

The current endurance test conducted on 16 security apps for Android has revealed plenty of candidates worth recommending. The lab can award up to 6 points for each test category. All in all, 12 of the 16 apps evaluated received the full 18 points, namely the apps from Avast, AVG, Avira, Bitdefender, F-Secure, G DATA, Kaspersky, Norton, Protected.net, securiON, Sophos and Trend Micro.

These are followed by the apps from McAfee and AhnLab, which achieved very good results of 17.8 and 17.5 points. The system bodyguards from Google and Ikarus were somewhat less successful and landed at the bottom of the ranking, with Google scoring 14.7 points in the endurance test and Ikarus only reaching a total of 14.2.

Given the meager result of the standard Android security solution, Google Play Protect, the answer to the question of whether users should rely on a different Android protection app is clear: most definitely yes.

Another area that was not evaluated in the test but is nonetheless interesting is the additional features provided by the security apps. Depending on whether an app is available for free or as a premium version, vendors offer a variety of interesting extras ranging from identity protection to network and WiFi tools and right through to parental control functions.

The best antivirus software for Android
Android: May 2022