Thanks to Windows 10, PCs without security protection are a thing of the past. Although the internal Windows Defender already does a good job, other products can partly do better. What's more, they also throw in many extra features. After examining 21 security packages and suites in the lab, AV-TEST was able to award special recognition to more than half of them. 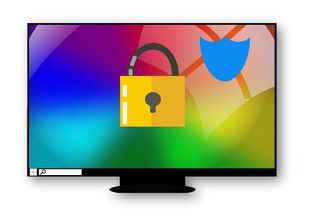 21 security suites put to the test

In their quest to make a quick buck, cyber gangsters are not discriminating as to whether private individuals or companies should pay for a ransom for their hijacked data. Everything brings in money, which is anyone not paying attention will be hit. Good security software considerably lowers the risk of becoming the victim of an attack. The laboratory of AV-TEST tested 21 current security suites and packages in terms of their protection, performance and usability. The test series naturally also includes Windows Defender, which Microsoft delivers embedded in its system.

11 out of 21 security packages with top scores

The quality and reliability of the security packages has continually increased over the last few years. This test also shows that users will find reliable security partners in these packages. In the test, each package has the opportunity to garner 6 points each in the three test phases of protection, performance and usability. If a candidate achieves 17.5 or even the maximum 18 points, then in addition to its certification, it also receives recognition as a TOP PRODUCT. In this test, the lab awarded this recognition to 11 out of 21 packages. An additional 5 products completed the test with good 17 to 16 points. Only 5 out of the 21 products tested came in below 16 points. 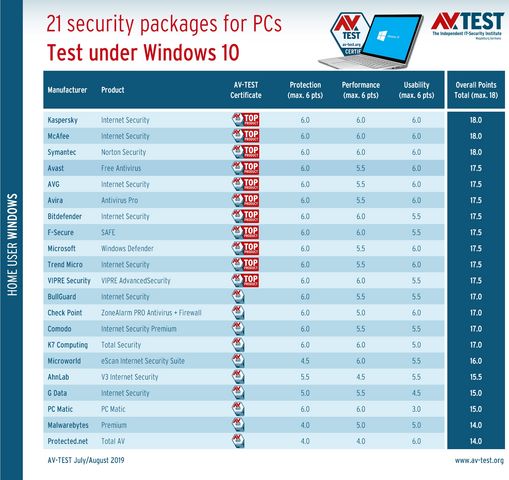 The best security packages for Windows 10

With 18 and 17.5 points, a package earns recognition as a TOP PRODUCT – a rating earned in the current test by a total of 11 out of 21 products. 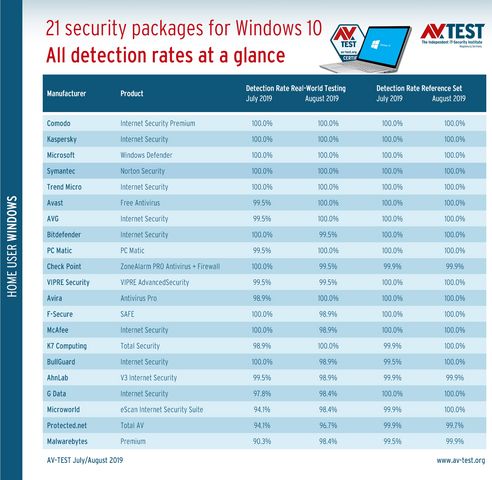 Here is how well the security packages detected nearly 14,000 digital malware samples in the test

In terms of detection, 5 products were able to identify, quarantine and delete the malware without exception.

The best security packages for Windows 10

Here is how well the security packages detected nearly 14,000 digital malware samples in the test

Protection as a trademark

The first question of users is always: How well does the security program detect attackers? AV-TEST providers answers to this question in a comprehensive protection test. Over a period of two months, the lab tests each security program in two phases: The real-world test involves the detection of entirely new malware samples that the lab has collected from websites and extracted from e-mails shortly prior to the test launch. In the second phase, the object is actually to detect old known threats, as the malware samples in the reference set are up to 2 weeks old.

In all test phases, 5 products were able to detect the malware samples 100 percent of the time: They come from Comodo, Kaspersky, Microsoft, Symantec and Trend Micro. With minor errors in the real-world test and a 99.5 percent detection rate, the packages from Avast, AVG, Bitdefender and PC Matic came in just behind the frontrunners.

This was followed by the packages from Avira, BullGuard, Check Point ZoneAlarm, F-Secure, K7 Computing, McAfee and VIPRE Security, with varying minor errors in detection in the individual test phases. All of the previously-mentioned packages, however, received the full 6 points for protection.

Slowing down is not an option

If security slows down the PC during work or gaming, many users will then try to get rid of the software. That's why, in the category of performance and in many application steps, the lab tests whether the PC is slowed down by a security package. As part of the test, a normal PC and a high-end PC are used as reference devices. The time is clocked on these machines to see how long it takes to load a large number of websites, download tools, install and launch software, as well as to copy files. Afterwards, the procedure is repeated with each installed system watchdog and the results are compared.

The findings are sure to be of interest to many users: 9 out of the 21 security tools had hardly any measurable slowing-down effect on the test PCs, thus receiving the full 6 points. These are the packages from Bitdefender, F-Secure, K7 Computing, Kaspersky, McAfee, Microworld, PC Matic, Symantec and VIPRE Security.

Due to the slightly measurable sacrifices in speed, the lab awarded what was still a good score of 5.5 points to 8 additional packages. They are the products from Avast, AVG, Avira, BullGuard, Comodo, G Data, Microsoft as well as Trend Micro.

Only the programs from Check Point and Malwarebytes as well as AhnLab and Protected.net with Total AV slowed down the PC more than the rest of the field. For this, the packages only received 4 to 5 points. 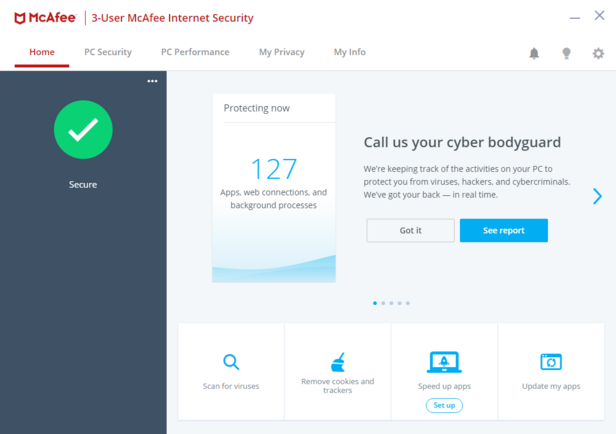 The security package made an impressive showing in the test, achieving the maximum 18 points 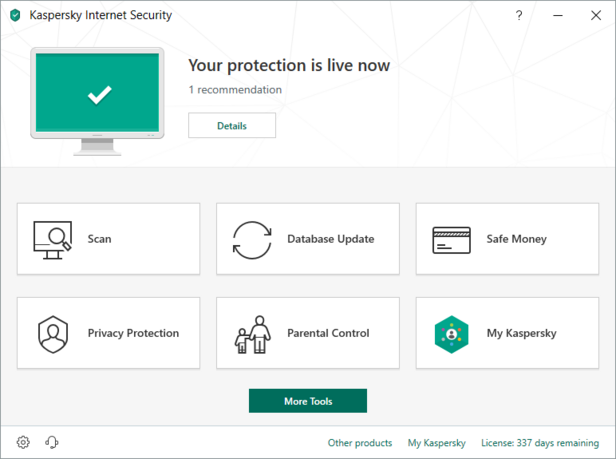 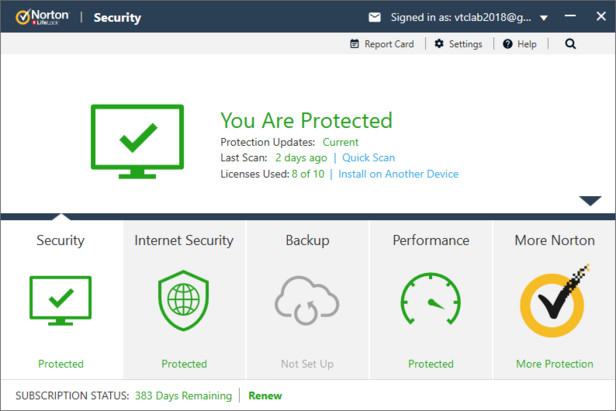 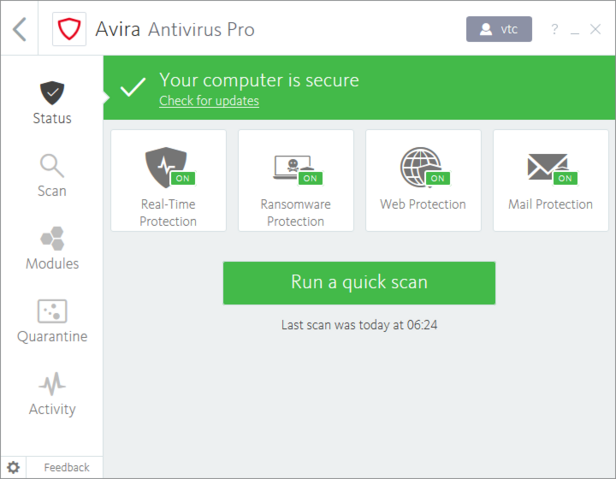 The performance of the security package was nearly perfect; the testers were only affected by a minor system load – therefore 17.5 points 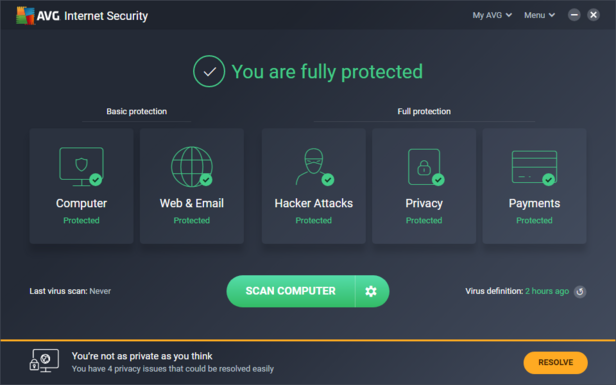 With 17.5 points, the package came close to the top score of 18 points 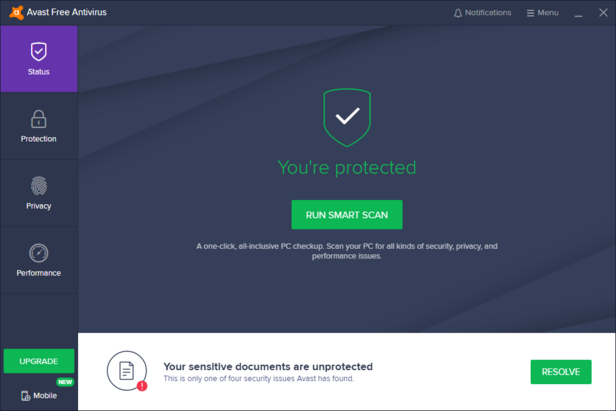 The free security suite delivered an almost flawless result – only the system load led to a minor point deduction: 17.5 out of 18 points

It really is annoying when a security system suddenly quarantines a harmless software tool, blocking or even deleting it. That is why in the usability test, the laboratory evaluates how securely the applications can tell the difference between friend and foe. This is indeed why the lab runs 1.4 million clean files through each test PC and has them checked out by the security software. In addition, the testers visit hundreds of websites, and install and launch dozens of popular tools. If a security tool completes its work perfectly, it should not trigger a single alarm throughout the entire usability test.

The suites from Avira, Kaspersky, Symantec and Protected.net completed this task perfectly and sounded no alarm. Avast, AVG, Check Point, McAfee, Microsoft and Trend Micro will be slightly annoyed to discover that all of them committed only a single error. All of these programs received the maximum attainable 6 points for their performance in this test phase.

The following manufacturers still achieved a good error rate between 3 and 7, scoring 5.5 points: AhnLab, Bitdefender, BullGuard, F-Secure, Microworld and VIPRE Security. All others wrongly identified too many benign programs and only received 5 points. With 15 false alarms, G Data only received 4.5 points, and PC Matic, with 52 errors, only earned 3 points.

In this test, the lab was able to award 11 out of the 21 security packages tested with the TOP PRODUCT label. The programs from Kaspersky, McAfee and Symantec, with 18 points, attained even the maximum achievable point score. An additional 8 packages still received an excellent point score of 17.5 for their performance. Included in this group is also the Windows-embedded Defender. The argument that the Windows Defender already provides good protection to a Windows 10 system cannot be denied. However, it does commit errors in the detection of benign tools. What's more, Microsoft was forced to admit that many Defender programs had been disabled in October 2019 due to faulty updates. Only when they hurriedly followed up with a repair update did they get the bug under control.

One should also not forget that a Defender delivers only protection, otherwise offering hardly any features. In this respect, the other highly-rated 10 protection tools have much more to offer in terms of special add-on tools, protection of private data, VPN or parental control functions. Yet it is up to each user to decide what exactly they want or need. With the help of the below results, however, users are always on the safe side in the selection of their product and don't have to buy a black box.