15 Security Apps for Android in an Endurance Test

Worldwide, there are over 3 billion Android devices in operation, and over 300 million new ones are added each quarter – and all are potential targets for attackers. Those who don't want to fall victim to an attack ought to protect their Android devices with a security app. The lab at AV-TEST put 15 apps to an endurance test for a full 6 months. 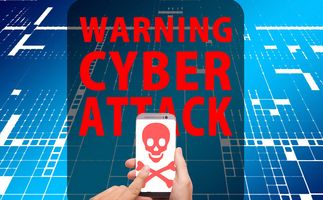 Android has already been the No. 1 mobile operating system for quite some time now. Over 80 percent of the smartphones and tablets sold worldwide run on the Android platform. Overall, according to statistics, there are currently more than 3 billion devices running on Android, and some 300 million new smartphones and other devices are added every three months.

Cybergangsters with botnets and cryptominers try to hijack as many mobile devices as possible, putting them to work for their own purposes. Because Android devices are generally available 24/7 and always online, and 3 billion devices are a huge target group. Those who don't want to become a victim to cybercrime should protect their Android smartphones or tablets with good security software. The lab at AV-TEST examined 15 Android security apps in an endurance test from January to June 2021. Included in the test as the 15th app in the mix was Google Play Protect, the protection app embedded in Android. Because according to Google, this protection is always active, automatically evaluating every app on the device. But the endurance test revealed that this service does not provide particularly good security: every other security app offers better protection than Google Play Protect. 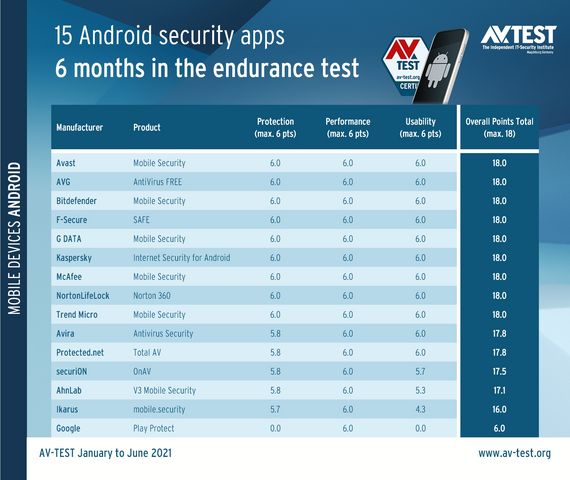 All in all, 9 of the apps examined achieved the best score of 18 points – 2 additional apps followed close behind with 17.8 points 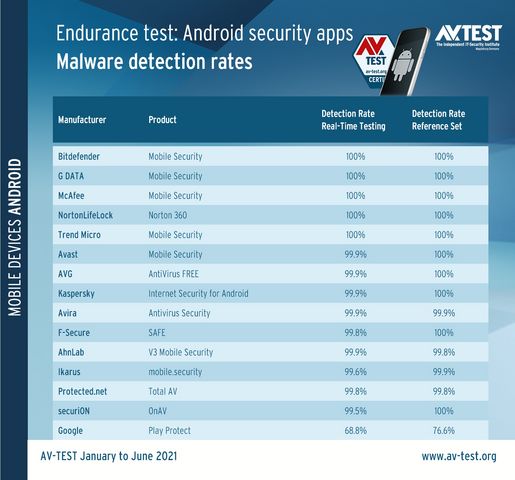 Each protection app in the endurance test was required to detect just under 20,000 malware apps – 5 apps managed to achieve 100 percent in all the tests

The endurance test demonstrated how well the security apps of the manufacturers performed. The test included the apps from AhnLab, Avast, AVG, Avira, Bitdefender, F-Secure, G DATA, Google, Ikarus, Kaspersky, McAfee, NortonLifeLock, Protected.net, securiON and Trend Micro. Each software application was evaluated in terms of its protection, performance and usability. For each category, the laboratory awarded up to 6 points, i.e. 18 points as a top score.

9 of the 15 apps achieved the top score in the endurance test. They came from Avast, AVG, Bitdefender, F-Secure, G DATA, Kaspersky, McAfee, NortonLifeLock und Trend Micro. This was followed by the apps from Avira, Protected.net, securiON and AhnLab, with 17.8 to 17.1 points. Ikarus managed to achieve 16 points, and the Google Service earned a mere 6 points.

Important: The lab differentiates between Android security apps for consumers versus those for corporate users – also in the test. That is why in this test, in the category of protection, for example, a greater number of infected game apps are deployed than in the test for business apps.

The lab regularly tests many business apps as well. The last test took place in May 2021 and can be reviewed free of charge online.

The supreme discipline for security apps, of course, is fending off malware or spyware apps for Android. In the endurance test from January to June 2021, there were three rounds of testing in the so-called real-time test, each involving more than 3,000 newly-discovered malware apps. In addition, per test round the lab used a reference set, containing over 3,000 additional malware apps that have only been in circulation for roughly 4 weeks.

The results showed that superb protection for Android does exist. A total of 5 apps always detected all the attackers 100 percent in the real-time test and in the test with the reference set. The apps came from Bitdefender, G DATA, McAfee, NortonLifeLock and Trend Micro. Avast, AVG and Kaspersky each committed one minor error in the real-time test: 99.9 percent, but on the reference set it was 100 percent.

The protection apps from Avira, F-Secure and AhnLab committed small errors in either or both of the tests. Which is why they each ranged between 99.8 and 100 percent. The protection tools from Ikarus, Protected.net and securiON performed at a somewhat lower level in terms of protection. Finishing in last place, Google Play Protect only detected 68.8 percent in the real-time test and 76.6 percent in the test with the reference set.

You're only good if you don't drain the battery

During the test, the lab also looked at the performance by the protection apps. The focus was on the load placed on the processor, how much data is loaded in the background, and how heavily this impacts the battery.

The result could not have been better: None of the 15 security apps showed any abnormalities in any test; thus, they each received the full 6 points from the lab. 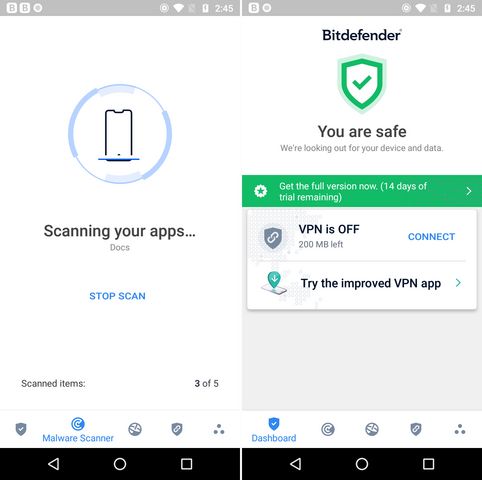 A perfect success in the endurance test: the detection achieved was always 100 percent 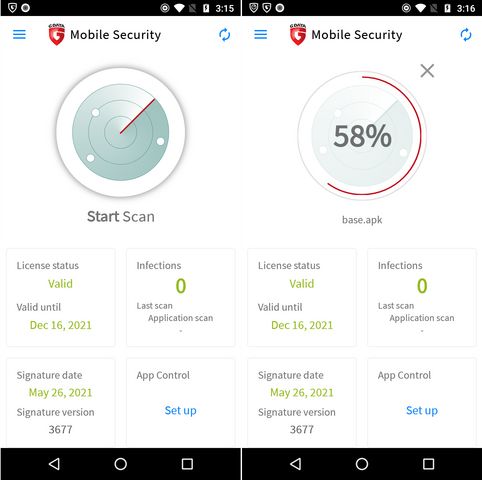 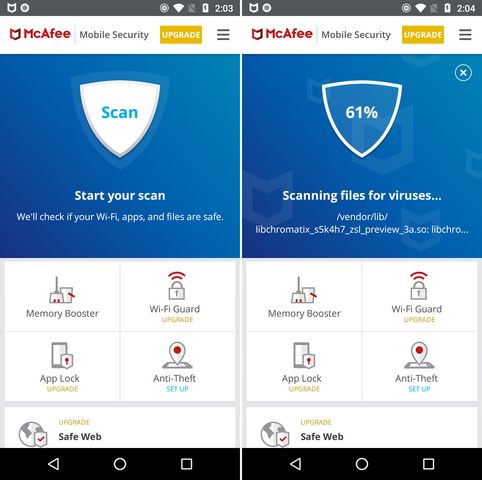 Scan effectiveness in the endurance test was always 100 percent, and for all other test areas as well –  the app achieved the maximum point score 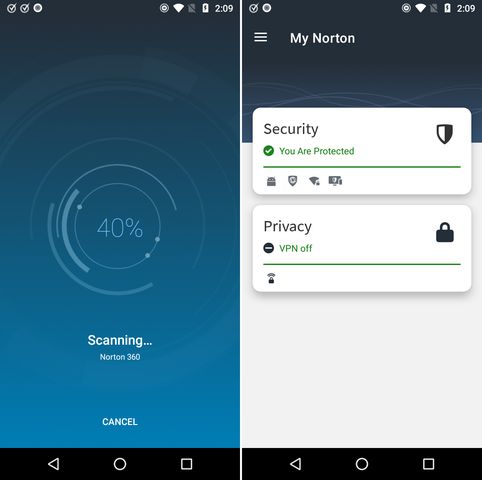 In the endurance test, the app delivered error-free security protection in all test areas 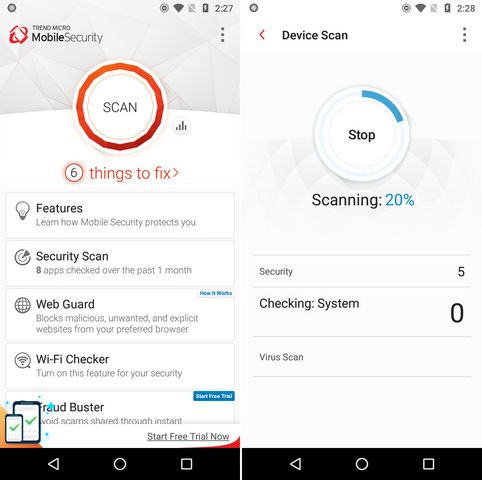 Error-free in all scans, earning the full point score in all tests – resulting in the top rating of 18 points

Naturally, the security tools always have to detect malware apps. However, an eager-beaver app might flag a harmless game as a dangerous cryptominer, for example. False alarms are a high-drama, nerve-jangling event for users. That is why the lab also evaluated this factor very thoroughly. Within the endurance test, nearly 10,000 additional harmless apps from the Google Play Store and other sources were installed on the devices, and the lab observed what the protection apps thought about them. 11 of the 15 apps examined detected the harmless apps as such: Avast, AVG, Avira, Bitdefender, F-Secure, G DATA, Kaspersky, McAfee, NortonLifeLock, Protected.net and Trend Micro. For this, each security application received the full 6 points.

securiON and AhnLab committed small-scale errors, still receiving 5.7 and 5.3 respectively. Ikarus threw out a few false positives: earning a mere 4.3 points. Google Play Protect, however, flubbed over 70 times in all the tests – as a result, no points were awarded.

Lots of security in a small app

The table of the endurance test from January to June 2021 shows that 9 out of the 15 test subjects achieved the maximum point score of 18. They came from Avast, AVG, Bitdefender, F-Secure, G DATA, Kaspersky, McAfee, NortonLifeLock and Trend Micro. With a strong 17.8-point finish, the apps from Avira and Protected.net followed close behind.

Very interesting to note: the apps from Avast and AVG can be used on an Android device free of charge. For the other apps mentioned, a small sum is charged for an annual licensing fee. In return, many apps also offer additional extremely useful extra features, such as network protection, a WiFi analyzer, an app permission manager and much more.

The endurance test also showed, however, that with Play Protect Google is trying hard, but with not much success. That is why every Android user should use an additional security app – there are certainly ample products to choose from.

Android: May 2021
The best Android antivirus software for home users