12 Antivirus Solutions for MacOS Sierra Put to the Test

The laboratory experts at AV-TEST examined 12 MacOS solutions for home users and business users in terms of their protection, performance and usability. Many of the packages demonstrated their quality and reliability. 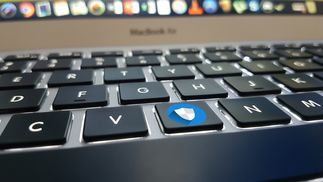 12 packages for home and business users put to the test.

The Mac world is more and more in the focus of malware authors. In June 2018, newly-recorded malware for MacOS has already been tallied at 37,000 samples – and thus approaching the entire 2017 level of 43,000 samples. While this represents fewer cases than in the Windows world, the number is in fact 100 times higher than Mac experts predicted even a few years ago.

Among the 12 tested security solutions for Mac OS High Sierra are 8 for consumers and 4 for corporate users. 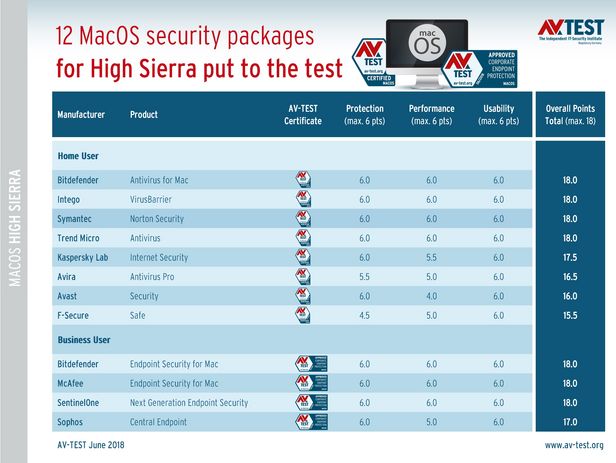 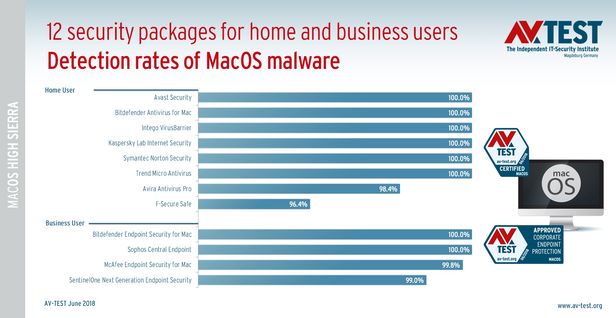 Protection for MacOS – the detection rates 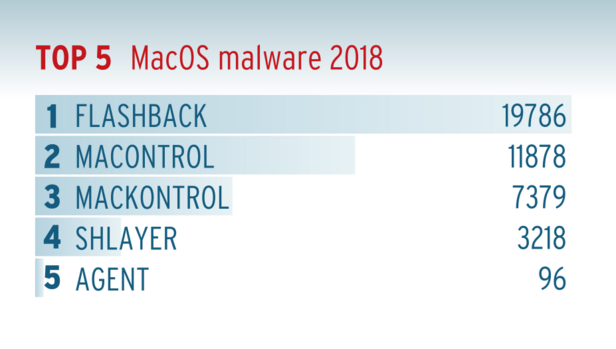 Flashback was so successful, new variants of it are constantly cropping up 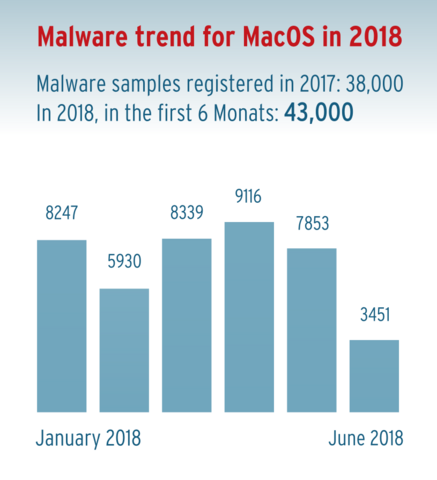 By the end of 2018, the number of new malware will more than double compared to 2017

Protection for MacOS – the detection rates

All security packages were examined on identical iMacs running MacOS High Sierra 10.13.3. The products were evaluated in terms of their protection, performance and usability. In each category, the laboratory awards a maximum of 6 points. Thus, the top score is 18 points. The products for consumer users from Bitdefender, Intego, Symantec and Trend Micro achieved this score. In the category of corporate solutions, the products from Bitdefender, McAfee and SentinelOne attained the best result.

Top detection for most solutions

In the test, each solution was required to detect, block or delete more than 500 of the very latest attackers. In the case of the products for home users, 6 out of 8 packages tested detected 100 percent of the malware samples. Only Avira and F-Secure had minor detection problems.

With respect to solutions for business users, Bitdefender and Sophos managed to achieve the 100 percent mark. The endpoint packages McAfee and SentinelOne followed close behind with 99.8 and 99 percent detection.

In everyday scenarios, many protection packages run in mixed networks and exchange data with Windows. That is why the laboratory tested the detection of Windows malware samples in a non-rated supplemental test. Among the consumer packages from Bitdefender, Kaspersky Lab and Trend Micro, the rate was nearly 100 percent. Regarding corporate solutions, the packages from Bitdefender, McAfee and Sophos reached similar high results.

In a second non-rated supplemental test, it was determined how well the solutions detected so-called "potentially unwanted applications" – or PUA for short. While these programs do not cause any damage, they do exhibit peculiar behavior. This includes tools with lots of advertising, ambiguous messages or even strange privacy statements. Some manufacturers see no direct threat in PUA, which is why they also do not classify them as dangerous. Among the packages for home users, Avast, Avira, Bitdefender, Kaspersky Lab, Symantec and Trend Micro detected over 2,500 PUA 95 to 99 percent.

A security solution constantly has to work in the background, monitoring processes and scanning files. Most solutions perform their work without slowing down MacOS – but not all. In the test category of performance, the lab examined how heavily each individual package affects the speed of the system. For the measurements on a reference system, numerous applications were launched and operations performed. In addition, files were copied locally and into the network. All the times required for the routines were written down and served as parameters for comparison. Afterwards, all the respective steps were repeated with active security solutions.

For consumers, the security packages from Bitdefender, Intego, Symantec and Trend Micro put their best foot forward and received a maximum 6 points as a result. Kaspersky Lab still managed to achieve an excellent 5.5 points. Avira and F-Secure slightly slowed down the system and only achieved 5 points. Avast slowed down MacOS too heavily: only 4 points.

For corporate products, the solutions from Bitdefender, McAfee and SentinelOne demonstrated that their effects on system performance are hardly measurable: 6 points. Only the package from Sophos caused a dip in performance in the client, which led to a reduction to 5 points. 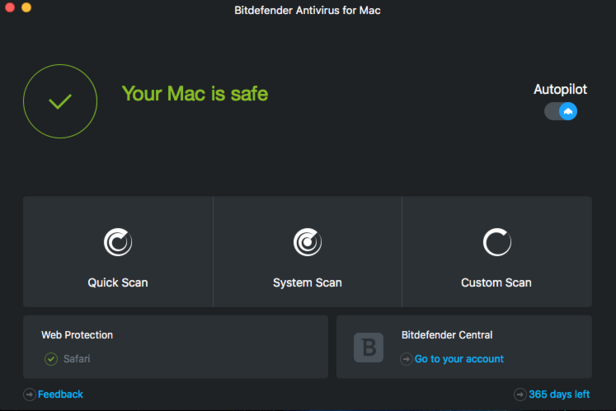 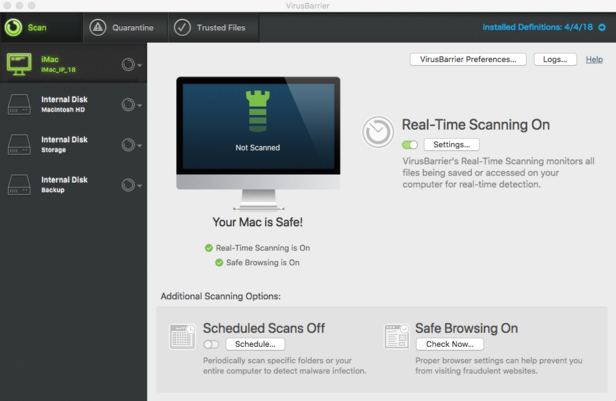 The package for home users worked without a glitch – 18 points 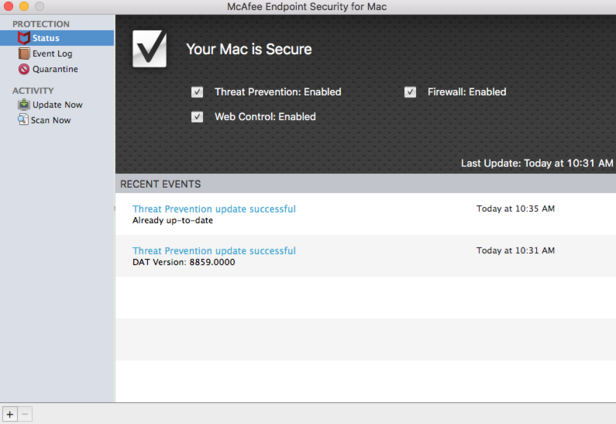 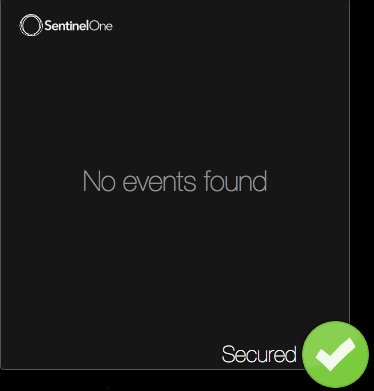 In the test, the business solution reached a top score with 18 points

If protection packages overreact, a normal application program can be quickly labelled as a threat. False alarms like these are unsettling to consumers and possibly lead to downtime costs in companies. That is why the lab examined the following: dozens of applications were installed under each installed security solution. In addition, over 4,000 benign programs had to be scanned in the false positive test.

Hats off to the results: All security programs – for home and business users – performed their routines without one single false alarm. Thus, the lab consistently awarded the maximum 6 points.

Well-armed in case of emergencies

More and more Mac users are opting to stay on the safe side and using security software for MacOS. The current statistics on malware growth also recommend this.

Consumers have a wide selection of excellent security software. A total of 4 programs reached the maximum point score of 18. They are from Bitdefender, Intego, Symantec and Trend Micro. Following close behind is the package from Kaspersky Lab, which also comes recommended with 17.5 points.

Yet also among the endpoint solutions for companies, 3 products, from Bitdefender, McAfee and SentinelOne, earned the maximum point score. Sophos affected performance slightly in the test on the client PC and had a point taken off as a result. Nonetheless, it still earned an excellent 17 points.