Many children between the ages of 7 and 14 already have their own smartphone. That's why parents ought to ensure that one of the many installed apps provide parental control. AV-TEST thoroughly tested how these apps perform in everyday use, and how well they can be controlled. 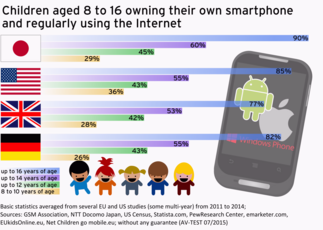 Just under 30% of eight-year-old children already have their own smartphone.

The gateway to the world in the hands of a 7-year-old child. That is perhaps a succinct description of a smartphone with Internet access. But as everyone knows about gateways, they not only enable you to go out, they also allow others to come in. And that is precisely where parental control software for children intervenes: it not only provides the appropriate paths to the Internet, but at the same time guards the front door against anything and anybody not allowed inside.

The technology and logic in the apps are very capable of distinguishing between suitable and unsuitable websites.

In terms of additional functions, most apps are somewhat meager.

Only few apps record where and how long a child has been online with the smartphone. 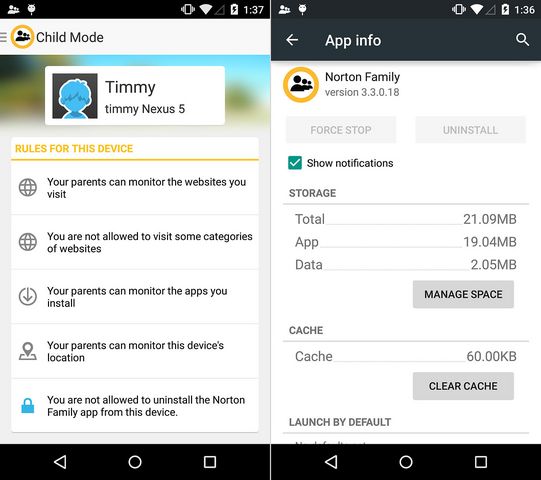 While the app does an excellent job at filtering websites, it is in fact almost too 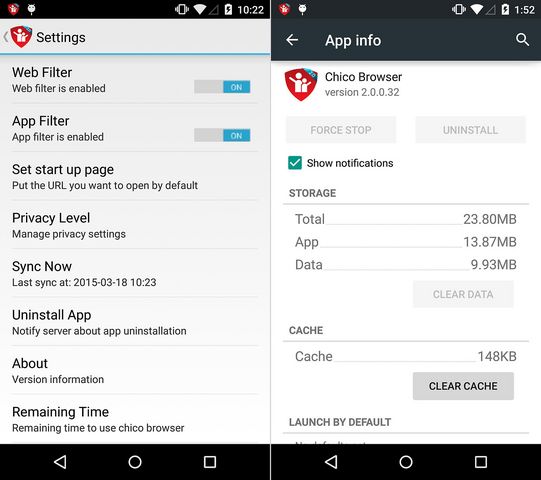 The app uses its own browser for protecting children from unsuitable Websites.

The test examined functions and scope, in addition to measuring Web filtering and detection performance. The bottom line is that nearly all the apps tested did a good job. The major differences in parental control apps lie in their features and in their range of functions.

The focus of parental control apps is on sorting and blocking websites and content. In order to allow the child access to appropriate websites, it is necessary to enter the child's age after installing the app. In the lab, the testers chose the fictitious 7 year-old Timmy and configured the program accordingly, i.e. selected a matching profile template. There are various ways of filtering Web content: websites can be precisely defined per whitelisting. Then the child is only allowed to access those sites. The second option is to have the app analyze websites logically according to names and content. For this purpose, most applications offer categories for which access can be even more precisely fine-tuned. Depending upon the profile, all the categories are activated and the websites called up are classified by the software, denying entry or access.

The test examines the technology or evaluation logic of the apps. To do so, each app was required to weed out over 6,000 websites that are definitely not appropriate for children. As a counter-test, 4,500 websites suitable for children were called up in an additional test segment. The difficulty of this task lies in the following: a fairy-tale website is definitely for children. The website of a car dealership may not be a children's site, but it is indeed suitable for children and therefore should not be blocked. It was necessary to accurately analyze the logic of the apps and to ensure that not too many websites were blocked in error. Because, if this occurs too often, children will become annoyed and will be determined to circumvent the parental control or eliminate it completely. In the findings, it was apparent that the apps highly effective in blocking certain categories, such as Symantec, Quick Heal or F-Secure, also blocked too many websites suitable for children in the counter-test. The best apps in the counter-test, such as Mobicip, Kiddoware or Salfeld are in turn somewhat weaker in filtering categories.

The app from Screen Time Labs did not filter out anything. The app only allows blocking or launching of the browser. If the smartphone is online, it is possible to block the device remotely via parental control, using the mobile device of the parents, for example.

The features of the individual apps with enhanced functions differ widely. It starts with search engine protection (safe search), which ought to be switched on automatically by the apps. This protection can be activated on Google, Bing or Yahoo, for example. From the beginning, the search engine filters out all search results containing films, photos or text content for adults. This function is only offered by the apps from F-Secure, Mobicip, Net Nanny and Symantec.

Many parents would definitely also want to take advantage of restricted access times for the device, Internet access or apps. But these additional functions are also few and far between. 7 out of 12 apps tested offer only one of the above blocking functions, and the Salfeld app offers two.

Kiddoware, Screen Time Labs and Symantec enable device blocking for a specified time. During this period, only the app from Symantec does enable emergency phone calls. All other apps don't!

Furthermore, the mobile tools allow the blocking of apps, monitoring of Facebook and the time-controlled blocking of incoming or outgoing calls. But even these functions are only partially available on individual apps, as the below table illustrates.

Nearly half the protection apps for children offer a Web portal that enables remote parental administration or also displays all recorded activities in an easy-to-read format. For certain apps, it is also possible to locate the smartphone via this website. This function is actually intended for easier recovery of a lost device.

The app manufacturers with a Web portal also generally offer report or log functions enabling easier monitoring of a child. This includes lists of websites visited and blocked, a search history, lists of launch attempts of blocked apps, and overviews of all instances where the child broke the rules. Only Screen Time Labs indicates how long the cell phone has been used. Overall, the log and report functions are only part of the package in a few apps.

Which app is the best?

There is no best app or overall winner. For this, the features of the apps and their philosophy in terms of filtering, detecting and reporting are too diverse. Here's a tip from the testers: the younger the users are, the more automated the blocking of websites and services ought to be: Because 7 to 10-year-old children are not as easily frustrated by blocked websites – they simply continue surfing. Youths are easily annoyed by too many blocked websites and will search for ways to circumvent the software. That is why for this age group, the testers recommend fewer roadblocks, but good log and report functions instead. Parents ought to also engage children in a personal discussion about certain subject matter found on the Internet.

More and more children have their own smartphones

When children want to have their own smartphones, parents are increasingly subject to incredible pressure. The youngest members of the family are quick to cite the fact that 80% of their friends already have their own mobile device.

In this manner, there have been steadily increasing numbers of smartphones owned by children, which is almost impossible to track statistically anymore. The most recent studies, conducted over several years, all predict rapid growth. Especially children from industrial nations such as Japan, the United States, the UK or Germany, usually own a smartphone, alternatively a tablet, or both. In these countries, surveys indicate that already some 30% of all 8 to 10-year-old children own a smartphone. In additional age groups, the numbers increase rapidly – roughly 5 to 10% for each additional year of age. These statistics do not include children who have access to the cell phone of their parents or have their own notebook!

With a smartphone, children can be online every day and every second. Merely from a time perspective, it is not possible for parents to keep track of this. That is why parental control software should be standard at least for 6 to 14-year-old children.