The security of MacOS can be increased with the right protection solution. The laboratory of AV-TEST examined 12 of the latest applications for consumer and corporate users and found really good protection packages. 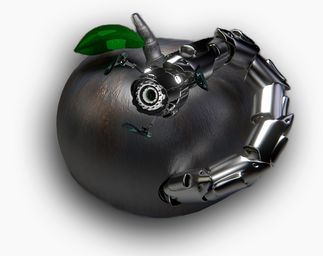 In this test, the laboratory examined 9 products for use on consumer Macs and 3 solutions for corporate users. The performance of the products is quite impressive. Most applications not only require hardly any additional system resources, they offer good protection against the latest threats. Tests involved consumer packages from: Avast, Avira, Bitdefender, ESET, F-Secure, Intego, Kaspersky Lab, Symantec and Trend Micro. Moreover, the corporate solutions from Bitdefender, McAfee and SentinelOne were examined.

The MacOS system is generally considered to be secure against attackers. However, Apple has to admit more and more often that the systems have vulnerabilities and the publishing of updates can take even weeks and months. This is something that the authors of malware apparently seek to exploit. The number of malware samples registered with AV-TEST increased from roughly 27,000 in 2017 to almost 93,000 in 2018. That represents an increase of just under 350 percent.

Consumer users can decide whether they want more protection. Corporate users, on the other hand, are required to ensure that their data is adequately protected. The EU GDPR (EU General Data Protection Regulation), for example, mandates data protection. Companies outside the EU, e.g. from North or South America, are also required to comply with the new data protection regulation when cooperating with European companies.

The protection solutions for consumer and corporate users were examined on identical iMacs running MacOS High Sierra 10.13.3. The test is divided up into three sections: protection, performance and usability. The last criterion mainly involves the false alarms caused by the packages. In each section, a solution can achieve up to 6 points, i.e. a maximum total of 18.

Among products for home users, the best point score was attained by protection packages from Bitdefender, Symantec and Trend Micro. Kaspersky Lab followed with 17.5 points.

For corporate solutions, only Bitdefender was able to achieve the maximum score. However, the products from McAfee and SentinelOne followed with a very good score of 17.5 points. 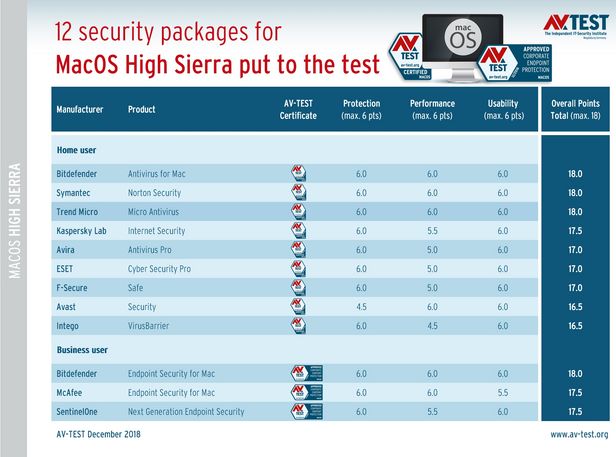 In the latest certification test, 9 packages for consumer users and 3 corporate solutions earned their certificate 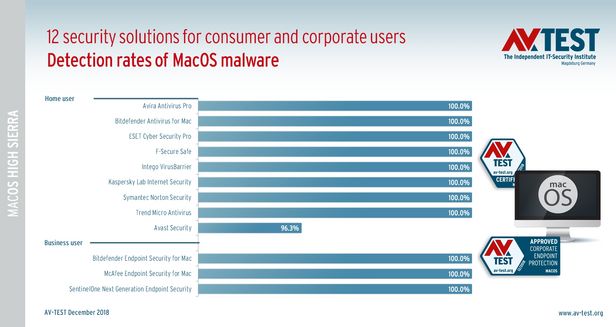 The protection of security packages for MacOS 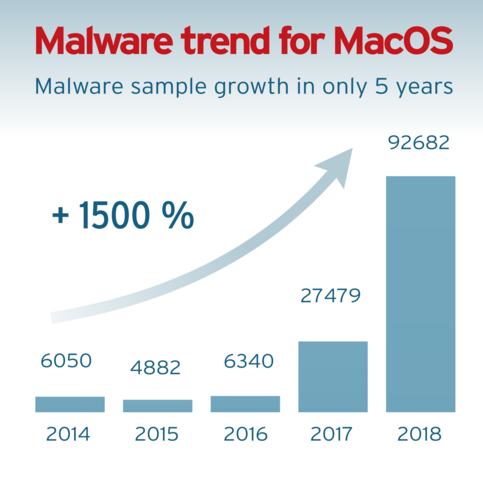 The growth over the past 5 years has been enormous

The protection of security packages for MacOS

AV-TEST's laboratory is continuously compiling a so-called reference set with over 240 of the most important and latest threats that the protection packages are required to scan. Among the products for consumer users, all but one program detected 100 percent of the attackers. The protection tool from Avast detected only 96.3 percent of the malware samples.

There were no errors in the corporate solutions: all attackers strictly targeting MacOS were always detected 100 percent.

The lab performed a non-evaluated test to determine whether the packages could also detect Windows attackers. This makes perfect sense, as Macs often collaborate with Windows PCs in a network. While Windows malware cannot wreak any havoc on the Mac, it does use the Mac as a vector for attacking Windows PCs. The end user packages from Avira, Bitdefender, ESET, Kaspersky Lab and Trend Micro detected more than 99 percent of the Windows threats. As did the corporate solutions from Bitdefender and McAfee.

In a second non-evaluated test, nearly 5,500 so-called "potentially unwanted applications" – PUA for short – were identified. While these applications do not cause any damage, they do exhibit questionable behavior. This includes tools with lots of advertising, ambiguous messages or even strange privacy policies. Some manufacturers see no immediate threat in PUAs, which is why they also do not classify them as dangerous.

Among the packages for consumer users, Avira, Bitdefender, ESET, F-Secure, Kaspersky Lab, Symantec and Trend Micro detected between 90 and 99 percent of the PUAs. Among the corporate solutions, only Bitdefender and McAfee identified many tools as PUAs. Their rate of detection was around 90 to 95 percent.

A popular argument of Mac users against the use of security software is the additional system load. The laboratory also examined this criterion in depth. First, operations were performed on a reference PC, logging the time required: downloading over 90 applications, launching standard software, installing nearly 160 programs, and copying data – locally and to a network. Afterwards, all the protection packages were installed individually, the operations were repeated and the times were compared to the reference time.

Among products for consumer users, Avast, Bitdefender, Symantec and Trend Micro demonstrated how a high level of protection can go hand-in-hand with a negligible load on system resources. For this performance, they received the full 6 points in the test. The package from Kaspersky Lab had a minimal slowdown effect on the installation of software. Thus, only 5.5 points were awarded. Avira, ESET and F-Secure scored 5 points, Intego only 4.5 points.

Among the solutions for corporate users, Bitdefender and McAfee had little impact on system resources. This earned the full 6 points. SentinelOne slightly put the brakes on the launch of standard software: 5.5 points. 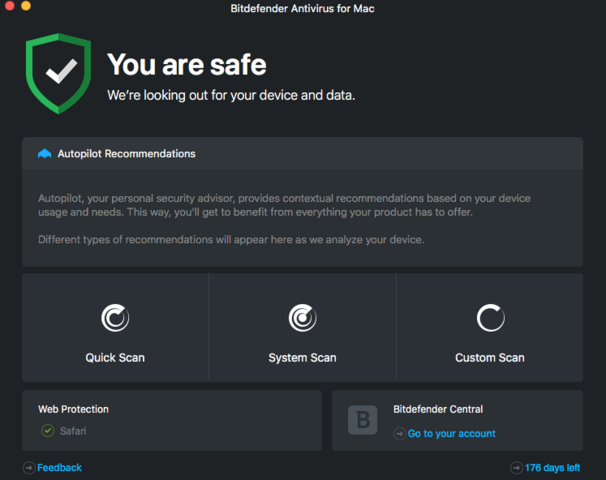 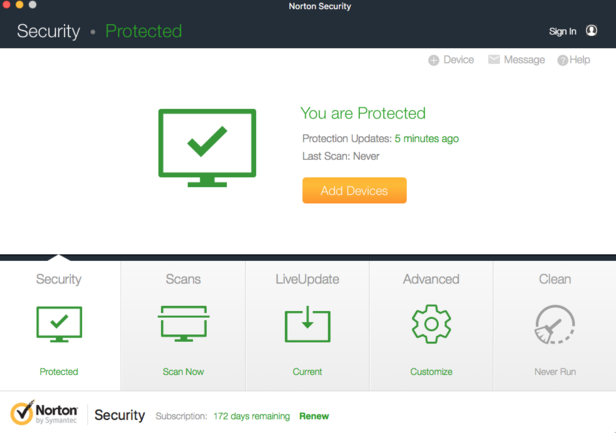 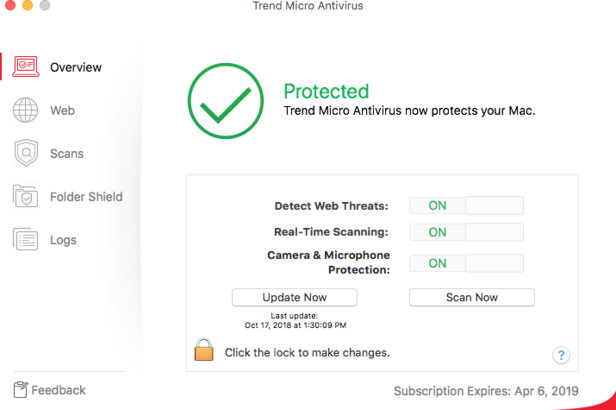 Delivering flawless performance, the protection package earned the maximum 18 points in the test 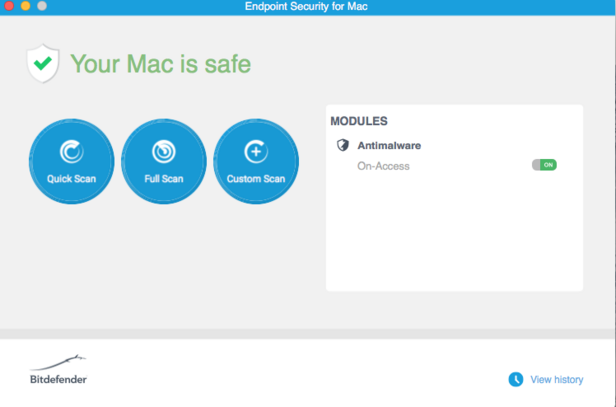 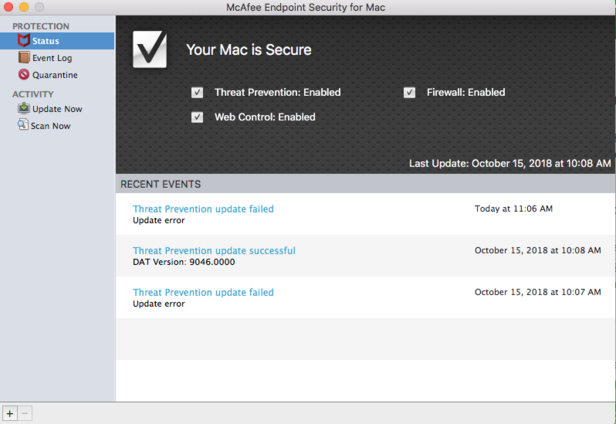 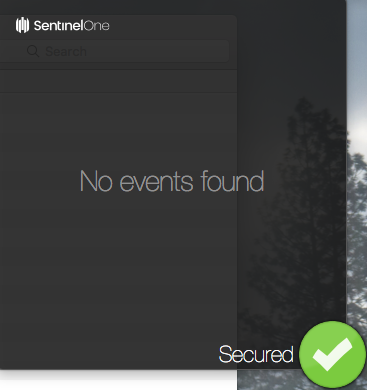 The corporate solution achieved a very good score of 17.5 points - however, there was a slight increase in the system load

In the usability test section, the lab examines whether the protection packages can distinguish between friend and foe. To do so, each package is required to scan over 20,000 normal and benign applications and to recognize them as such. If a program is identified as harmful, this is a false positive that can unnerve users. Moreover, the security packages are required to monitor the installation of normal software and, in doing so, are not allowed to block anything.

All the packages for end users passed this test with the best possible score of 6 points. There was not a single false alarm or false blocking of software.

Among the solutions for corporate users, Bitdefender and SentinelOne achieved perfect results: 6 points each. Only McAfee has cause to be dissatisfied, as one single software application out of over 20,000 was falsely detected and quarantined. Nonetheless, this led to a point deduction: 5.5 points.

This test shows that anyone seeking more security for the Mac at home or in corporate computing environments has a vast selection of security packages to choose from. With the packages from Bitdefender, Symantec and Trend Micro, consumer users will find perfect additional protection, achieving a maximum test score, without even putting a load on the Mac. This was followed by the package from Kaspersky Lab, which also comes recommended with very good results of 17.5 points. While the only free protection tool from Avast isn't bad, it cannot achieve the full point score in the important test category of protection.

The corporate solutions also achieved favorable results. Bitdefender's Endpoint Security concluded the test with the maximum score of 18. McAfee and SentinelOne followed immediately behind with 17.5 points. McAfee missed the best possible score of 18 points due to a single false alarm.