Test: Internet Security Packages – 1/2013. Windows 8 is considered to be a secure system thanks to its internal protection package containing Windows Defender, System Tools and Firewall. AV-TEST therefore decided to investigate the extent to which the use of an additional Internet security package can increase the basic protection provided by Windows 8 even further. The results of the test show that combining the Windows 8 package with another software suite significantly increases the average security of the system. 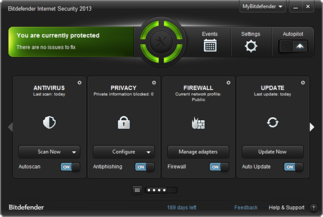 The security solution from Bitdefender displayed the best overall performance in the test, achieving 17.0 of 18.0 possible points. Bitdefender also achieved the top score of 6.0 points in the important category of protection together with five of its rival products.

Windows 8 features a complete security package formed from Windows Defender and other system tools such as the Windows Firewall and filter in Internet Explorer. This basic package was not amended or deactivated in the AV-TEST study. The Internet Explorer SmartScreen Filter also remained constantly activated throughout the test unless explicitly deactivated by a security product. The good news from the AV-TEST study is that the average ‘zero-day’ protection provided by all of the programmes increased from 92 percent when tested with Windows 7 in our previous study to 95 percent when tested with Windows 8.

The protection provided by the products was tested in two stages. The products were first exposed to attacks from so-called zero-day malware, namely brand-new attackers (in a real-world test). The second test used the AV-TEST reference set, which contains over 18,000 new pieces of malware from the last four weeks. A maximum total of 6 points was available in this category.

The system load of the products was tested in an everyday situation. The laboratory measured specific times in a system with no protection package and then compared these with the load caused when a package was used. The times measured involved activities such as loading websites, scanning downloads, installing and starting up programs and scanning and copying files. A maximum total of 6 points was also available in this category.

The usability of the products was tested by recording false warnings and blockages involving clean websites and software. We also registered false positives displayed in connection with files and installations that were actually not malicious. The overall ‘friend or foe’ identification of the suites was tested by making them scan over 600,000 clean files and programs. A maximum total of 6 points was also available in this category. 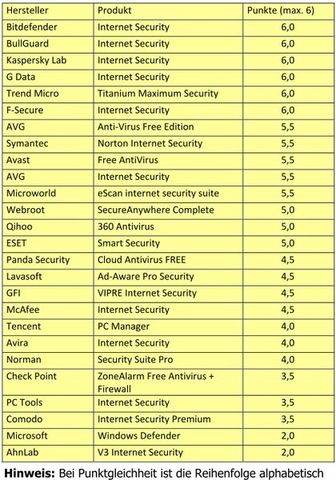 In the first test using Windows 8, a large number of products performed excellently in the protection category. Six packages achieved the maximum total of 6.0 points in the test and of these six, the security solutions from Bitdefender, BullGuard and Kaspersky Lab are also at the top of the overall ranking. 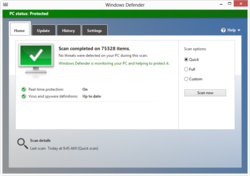 Microsoft’s internal security solution for Windows 8 was used as an additional basic protection package in the test.

Although it has a rather minimalist appearance, the BullGuard suite was able to achieve second place in the overall ranking. 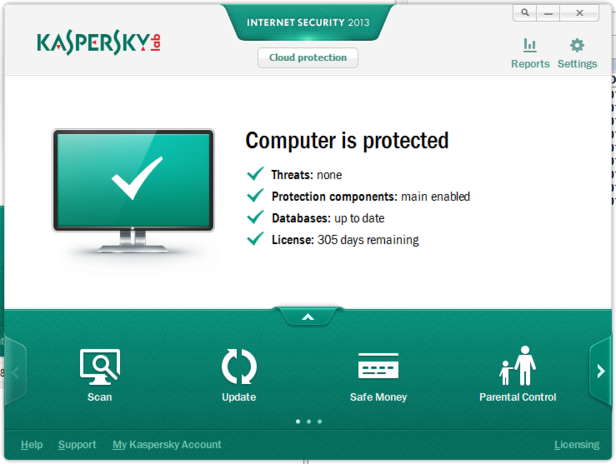 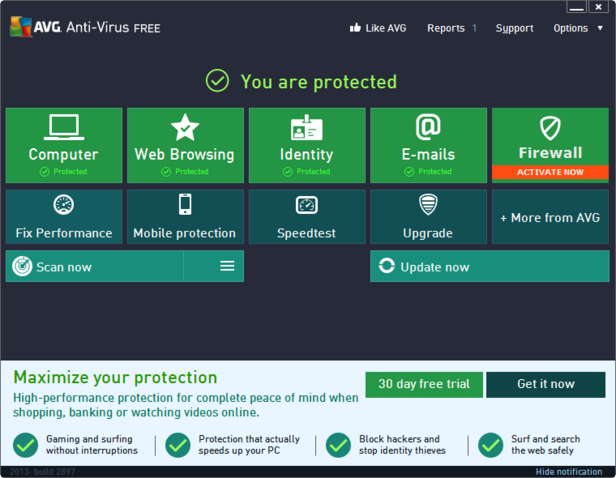 The free package from AVG scored a total of 15.5 points, which enabled it to achieve an excellent position in the upper half of the table and even beat the purchasable version of the AVG software included in the test by half a point. 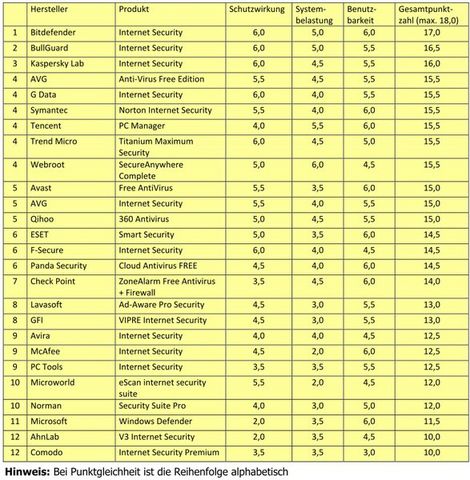 The suite from Bitdefender achieved the best result in this comparison by scoring 17.0 of the maximum possible total of 18.0 points. This program was relatively closely followed by the packages from BullGuard and Kaspersky Lab. The packages from AhnLab and Comodo, however, were unable to reach the points total achieved by the basic Windows 8 protection package.

A maximum overall total of 18 points were available in the test. None of the packages tested were able to achieve all 18 points. The best score in the overall test ranking was a total of 17 points, which were awarded to the protection package from Bitdefender, thus giving it the best overall performance. This package was closely followed by the product from BullGuard with a total of 16.5 points, while the Internet security suite from Kaspersky Lab came in at third place with 16 points.

The free version of the AVG protection package achieved a surprisingly high total of 15.5 points, as did the products from G Data, Symantec, Tencent, Trend Micro and Webroot. The extensive middle area of the table features points totals of between 15.0 and 12.5 points and contains products from Avast, AVG (purchasable version), Qihoo, ESET, F-Secure, Panda, Check Point, Lavasoft, GFI, Avira, McAfee and PC Tools. These are followed by the products from Microworld and Norman with a total of 12.0 points.

The solutions from AhnLab and Comodo, on the other hand, scored just 10.0 points and therefore did not perform as well as the basic protection from Windows 8. They did, however, both score the minimum number of points required for the AV-TEST test certificate.

The main focus of the test was the protection provided by each package. After all, if software performs poorly in this category, the speed at which it works or its other abilities become virtually irrelevant.

The best value of 6 points in the protection category was achieved by the packages from Bitdefender, BullGuard, F-Secure, G Data, Kaspersky Lab and Trend Micro. Almost all of these packages were able to identify 100 percent of the malware used in the test, although BullGuard and Kaspersky Lab displayed a slight deviation.

These top packages were closely followed by the products from AVG (both versions), Avast, Symantec and Microworld, which scored a total of 5.5 points.

The middle and lower area of the table contains the products that scored between 5.0 and 3.5 points, namely those from ESET, Qihoo, Webroot, GFI, Lavasoft, McAfee, Panda Security, Avira, Norman, Tencent, Check Point, Comodo and PC Tools.

The amount of protection provided by the AhnLab package was on exactly the same level as the protection from the basic Windows 8 package, with detection rates of between 81 and 86 percent in the real-world test. Both packages were able to identify 99 percent of the malware in the AV-TEST reference set.

System Load during the Test

In this context, it should also be taken into consideration that a security package can significantly slow down a system on a day-to-day basis. This particularly rings true during the copying of files, when programs designed to protect a system sometimes tend to turn on the brakes. The best scores in the system load category, namely 6.0 and 5.5 points, were achieved by the packages from Webroot and Tencent. These are followed by Bitdefender and BullGuard, the top two packages in the Protection category, with 5.0 points each.

The middle area of the table starts off with the Kaspersky Lab suite, which achieved a total of 4.5 points, and also contains eleven other packages with points totals of up to 4.0.
Where its system load was concerned, the internal protection package from Windows 8 scored a total of 3.5 points, as did the solutions from AhnLab, Avast, ESET, Comodo and PC Tools.

The packages at the bottom of the table, namely those from Microworld and McAfee, scored just 2.0 and 3.0 of the maximum possible total of 6.0 points and were therefore the worst programs in the test in terms of their load on the system.

Many of the suites tested were able to score a large number of points for the overall ranking by achieving excellent results in the usability category. Microsoft Defender set the bar high in this category by scoring a basic value of 6.0 points. Only eight of the packages tested, namely those from Avast, Bitdefender, Check Point, ESET, McAfee, Panda Security, Symantec and Tencent, were able to achieve the same level of success.

Eleven other packages succeeded in scoring impressive totals of 5.5 and 5.0 points, while five programs were lower down in the ranking with 4.5 points. Only the suite from Comodo was given a total of 3.0 points due to the fact that it classified too many clean files as malware in its ‘friend or foe’ identification.

The basic protection provided by Windows 7 can indeed be improved to a certain extent by combining the package with an Internet security suite.

Users who want to be able sit back, relax and surf the web without having to ask their entire family whether anyone knows the sender of every single e-mail attachment should therefore put their trust in an external security package. The products in the top 9 places in this recent AV-TEST study provide excellent protection for users' computers whilst only causing a small amount of system load and without constantly scaring users with false warnings. The number one product that boasted the best performance in this test using Windows 8 was the package from Bitdefender.