Which security solution for corporate users offers the most consistent protection? To find out, the lab at AV-TEST tested 15 client-server solutions for Windows over a six-month period. 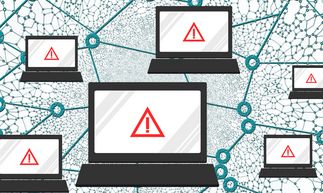 Above all, corporate users always want to know which security solution provides the best long-term protection. That is why the laboratory at AV-TEST put 15 solutions through six long months of tests, from July to December 2019, in terms of protection, performance and their influence on usability.

In the endurance test, each product was tested continuously for six months straight. All the data collected then flowed into the final result. In each category tested, protection, performance and usability, a product can earn up to 6 points. Thus, the best overall score is 18 points. Both solutions from Kaspersky and Symantec achieve the top score in the endurance test. They are followed by 8 solutions with 17.5 to 17.0 points: Bitdefender, Avast, Microsoft, Trend Micro, Sophos, ESET and McAfee with two versions. Following in the lower echelon, yet still achieving good results, are the solutions from Bitdefender (Ultra), Seqrite and G Data. 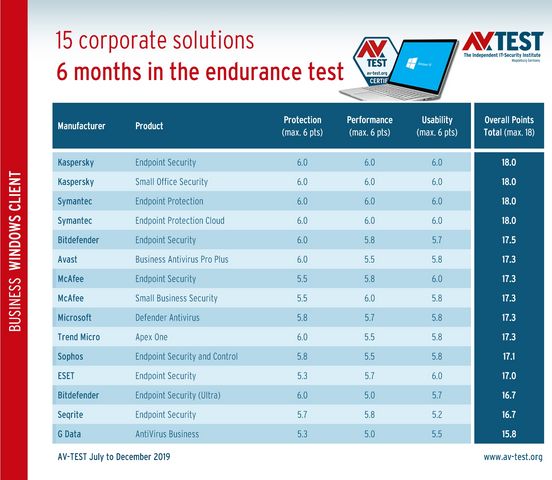 Business solutions in an endurance test 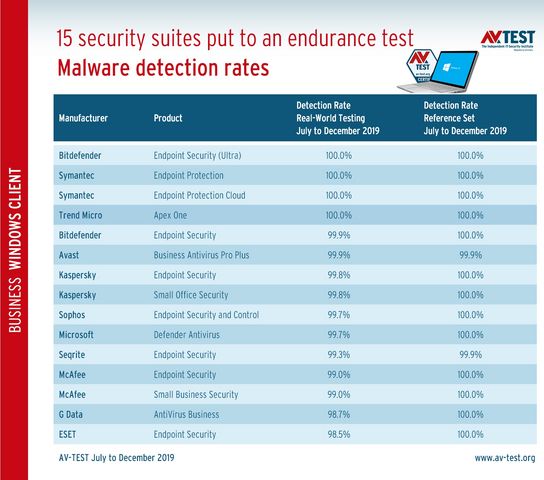 Malware detection in the endurance test

In terms of protection, Symantec is a top finisher, along with Trend Micro and Bitdefender Ultra – but Bitdefender had too high a system load

Business solutions in an endurance test

Malware detection in the endurance test

The protection solution's first line of defense is the detection of malware, such as viruses, worms or Trojans. For each monthly test, the lab collects new zero-day malware, which at the beginning of the test is only 1 to 24 hours old. These especially dangerous malware samples are used as the basis of the real-world test. In the six months, more than 1,000 specimens of zero-day malware were deployed. In the second test, involving the so-called reference set, the lab examines whether the manufacturers can also reliably detect older and more well-known malware. Throughout the months of testing, the solutions were required to detect and filter nearly 60,000 malware files.

The results of the endurance test are good. Bitdefender (Ultra), Trend Micro and Symantec with two versions detect the attackers without exception in both major test phases. Bitdefender's second version, Sophos, Microsoft, G Data, ESET and McAfee, as well as Kaspersky, with two versions, achieve error-free detection of 100 percent only in the test phase involving the reference set. Unfortunately, it's a different story in the real-world test. There, Bitdefender and Avast are at 99.9 percent detection, and both Kaspersky versions are at 99.8 percent each. The packages from Sophos and Microsoft follow with 99.7 percent. All other products are between 99.3 and 98.5 percent detection in the real-world test.

In addition to security, the system load caused by client software is also an important factor. After all, office PCs should not be immobilized solely in the interest of security. For this test, the lab uses standard and high-end PCs, installs a protection solution there and carries out various operations: launching websites, installing and starting up programs, performing downloads and copying data. How much time these actions require was previously recorded on a reference system. Afterwards, the lab compares the times that each solution needs to complete the identical tasks. In this performance category, up to 6 points can be earned for a very low system load. This top score was achieved by the solutions from McAfee (Small Business), as well as the two protection system versions from Kaspersky and Symantec. Endpoint Security from Bitdefender, Seqrite and the endpoint security version from McAfee followed with a very good score of 5.8 points.

The client software from Microsoft, ESET, Avast, Trend Micro and Sophos place a relatively small load on the client and were thus awarded high scores of 5.7 to 5.5 points. The solution packages G Data and Bitdefender Ultra put a higher load on the client than other solutions: both still earned 5 out of 6 points. In overall terms, that is a good result for all solutions over the long test period. 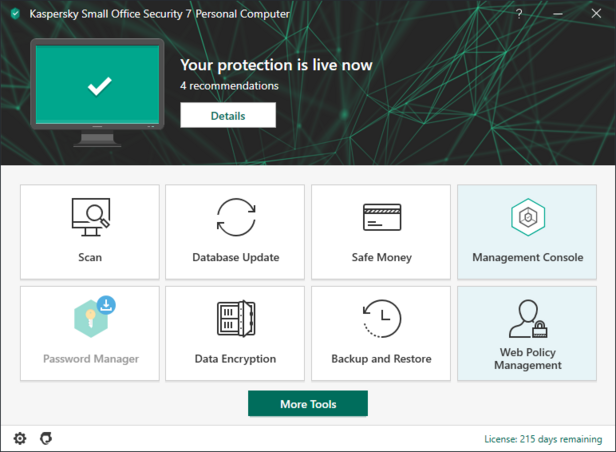 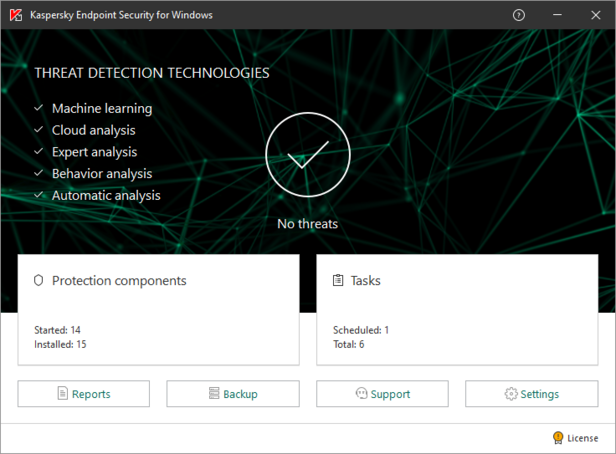 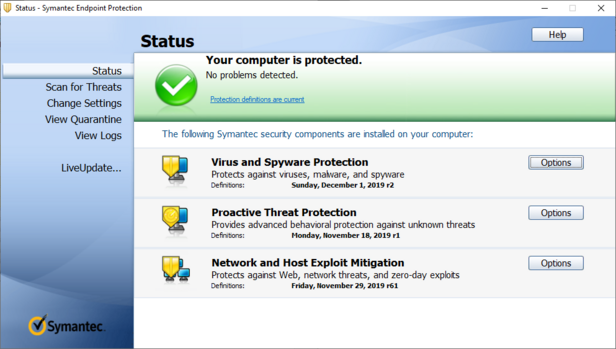 The Endpoint Protection version worked flawlessly and reliably throughout the 6-month period: 18 points 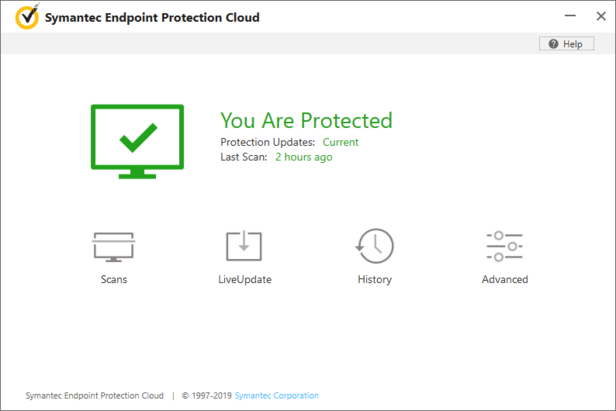 Under the third major test category, usability, the lab evaluates all security packages monthly for false alarms. Throughout the test period, the team visited 3,000 websites with each solution, installed 150 popular applications and scanned over 4 million normal, clean files. The last criterion is especially important, as it checks for so-called false positives, i.e. falsely identifying normal application files. In this category as well, the overall result is good. Some products even work so well in the test that there is no false alarm, or only one. For this, they received the full 6 points. They are the solutions from McAfee and ESET, as well as the two versions each from Kaspersky and Symantec.

An additional 7 products completed the test with excellent 5.8 to 5.7 points: Avast, McAfee Small Business, Microsoft, Trend Micro, Sophos and both versions from Bitdefender. The solutions from G Data and Seqrite made a slightly weaker finish with 5.5 and 5.2 respectively. That sounds worse than it is, as among over 4 million files scanned, it boils down to only 30 false positives, i.e. roughly 0.00075 percent.

The endurance test demonstrates how well and how reliably many of the tested solutions operate. After six full months of testing, above all the products from Kaspersky and from Symantec with two versions each were able to assert themselves. They receive the entire 18 points, i.e. the maximum 6 points in each individual test phase. Following close behind with 17.5 points is Bitdefender with its Endpoint Security. The solution exhibits a slightly greater system load than the group of frontrunners, and it does not trigger any false alarms. While the second version, Bitdefender Ultra, is just as reliable, it causes an excessive system load and is therefore in the lower third of the table.

7 additional business solutions prove their reliability, earning 17.3 to 17.0 points. This group includes the products from Avast and Trend Micro, as they receive the maximum point score in the vital category of protection. Both show weaknesses in less critical areas such as system load and false alarms. All other solutions in this echelon and below also have valuable points taken off in the area of protection, earning only between 5.3 and 5.8 points.