The lab at AV-TEST launched a new test series involving Android security apps for corporate users. In the initial test, AV-TEST introduces the scope and procedure for the future test series, based on three test candidates. 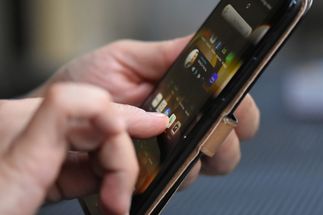 Protection apps for corporate users were frequently selectively included among tests for Android security apps. However, the perfect testing environment for evaluating apps for consumer users is not particularly well suited for protection apps in the corporate computing field. That is why in recognition of this problem, AV-TEST has separated the tests of Android security apps for consumers and corporate users. The test structure has in fact remained somewhat the same; here is an overview.

Tests for protection, performance, and usability

As with all other tests, the lab looks at three areas: protection, performance, and usability. In terms of protection, each security app is required to identify malware apps. With respect to performance, the processor and battery load caused by the apps is determined. The category of usability evaluates how business security apps react to normal, innocuous apps. For each category, the laboratory awards up to 6 points. Thus, a security app can achieve up to a total of 18 points.

Protection put to the test

When it comes to examining protection for corporate apps, the lab relies on the same system as with apps for consumers. In the real-time test, over 3,100 brand-new malware apps have all been filtered out of the Internet. In the second test segment, the reference set, the lab examines protection apps for corporate users by subjecting them to over 3,000 extremely dangerous apps up to 4 weeks old. In this segment, there are minor differences compared to the tests for private users: in the test sets, there are few or no infected game apps, as these are seldom installed on corporate smartphones. Instead, the sets include more programs that typically end up on corporate smartphones. Conversely, the test with protection tools for consumers naturally tests more infected apps from the category of games.

The evaluated apps from ESET, Sophos and Symantec show excellent results. The ESET Endpoint Security app completed each of the two tests with 100 percent detection. Symantec's SEP Mobile achieved 100 percent detection on the reference set. In the real-time test, the app reaches an excellent 99.9 percent. Sophos Intercept X for Mobile finished both test categories with detection rates of 99.9 percent.

In the initial test, all corporate apps delivered perfect performance with 18 points 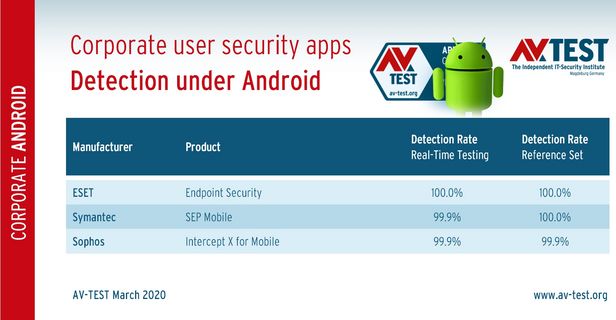 An eye on performance

Naturally, the impact on performance of an endpoint security app is a key factor. When employees are on the road, e.g. field staff and sales representatives, the battery of their smartphone or tablet needs to hold up. If the protection app is constantly working, requires a heavy CPU load, or is constantly re-loading data, this shortens the battery life. The lab also looks at these factors in the test involving each security app for corporate users. Here, the three apps from ESET, Sophos and Symantec receive consistently high marks, earning the top score of 6 points.

Usability: what about false alarms?

A particularly interesting topic involves false alarms that may be triggered by security apps. It's a difficult case, especially on mobile devices, as the system administrator is normally not nearby and cannot provide assistance. For this test, the lab sends just under 1,400 harmless business and office apps from the Google Play Store to the test devices. Each corporate protection app ought to flawlessly detect that the apps are innocuous and not to be blocked or deleted. All three endpoint security apps in the test do perform flawlessly here.

The difference in this corporate user test compared to the test for consumers: apps were installed only from the Google Play Store and not from other sources. Installation from other sources is normally not allowed on mobile devices in a corporate computing environment anyway. The selection of the harmless apps continues to be geared towards office and business applications. This involves no game and entertainment apps. 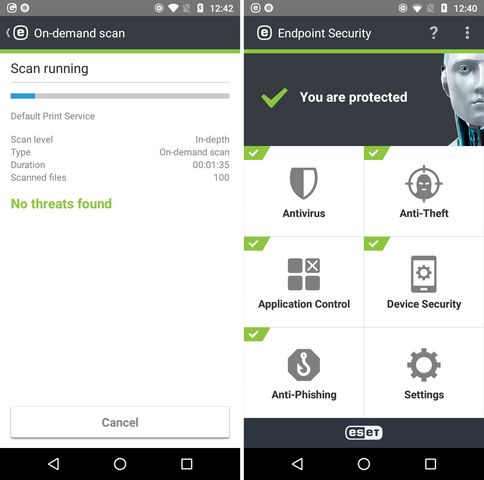 The corporate app achieved the maximum 18 points in the test 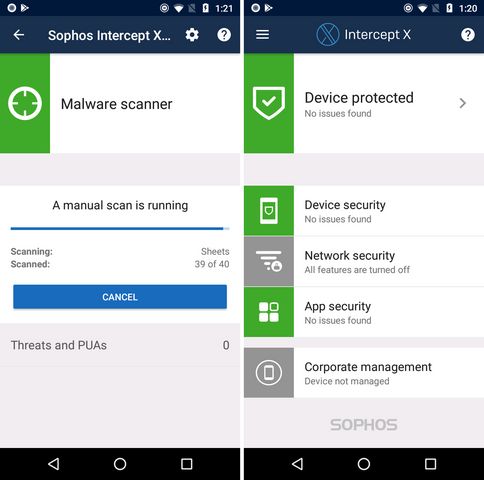 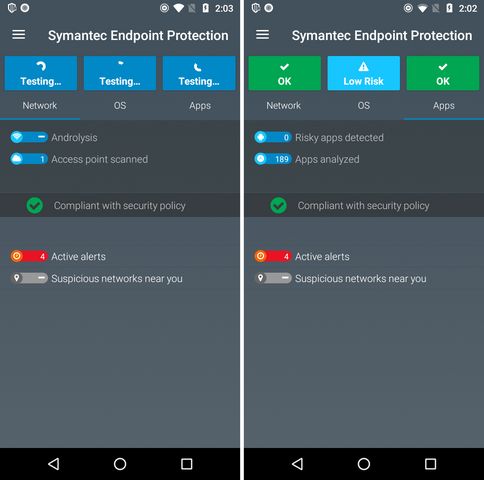 Many companies like to secure their desktops, servers and notebooks using endpoint security solutions. Far too often, mobile devices running on Android have been neglected in the process. For complete protection, every leading supplier of security solutions also has Android apps in their portfolio. Especially when employees do not use issued corporate devices but rather their own mobile device, the risk increases for corporate users. Even in the case of BYOD (bring your own device), a private employee device can still be secured the way it should be. Because the endpoint security apps also monitor many additional functions on the devices and often prescribe rules. In terms of protection, performance, and usability, the recently evaluated security apps of the corporate solutions from ESET, Sophos and Symantec are a sure thing. In all test categories, the apps finished with the maximum point score of 6, thus reaching the top score of 18 points.

Android: May 2020
The best Android antivirus software for business users