Perfect Protection for XP at Home or at the Office

In March and April 2013, the anti-virus test laboratory AV-TEST not only tested 26 protection packages for private use, but also nine business solutions for Windows XP. After all, both of these areas will soon be affected by a new development, namely the fact that Microsoft plans to completely stop its support for Windows XP in April 2014 and will therefore also cease to provide security updates for this system. You can use the latest AV-TEST test results to find the best protection package to suit your needs. 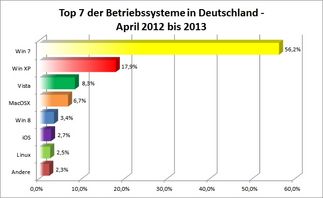 According to statistics, nearly 20 percent of computers in Germany were still using XP in April 2013, which corresponds to as many as almost one in five desktop PCs

Most of these XP PCs can be found in small and medium-sized enterprises (source: gs.statcounter.com).

According to statistics, nearly 20 percent of computers in Germany still use Windows XP systems. A large number of XP PCs in both homes and companies currently use a combination of the free Security Essentials security solution from Microsoft and their computer's internal firewall as their protection package. These users are now, however, facing a problem because Microsoft will cease to provide security updates for Windows XP in just a few months’ time.

The tests mentioned above also examined these Microsoft solutions, some of which are available for free. These Microsoft results should, however, only be used as a benchmark that helps you to ascertain whether you can make the XP system in your home or office more secure with a different security solution. The results of both tests do, in fact, clearly show that using a replacement security solution is very beneficial.

Anybody who chooses to continue to use XP after its system updates come to an end in a few months’ time will certainly need an excellent protection package. The AV-TEST laboratory recently subjected 26 Internet security packages to tests in the categories of “Protection", “System Load” and “Usability”.

The test not only examined 21 commercial versions, but also five free products, one of which was Security Essentials from Microsoft. The main aim of the other test candidates was therefore to be better than the Microsoft solution. The end result shows that 24 protection packages managed to achieve this goal and only one package performed worse than Security Essentials. 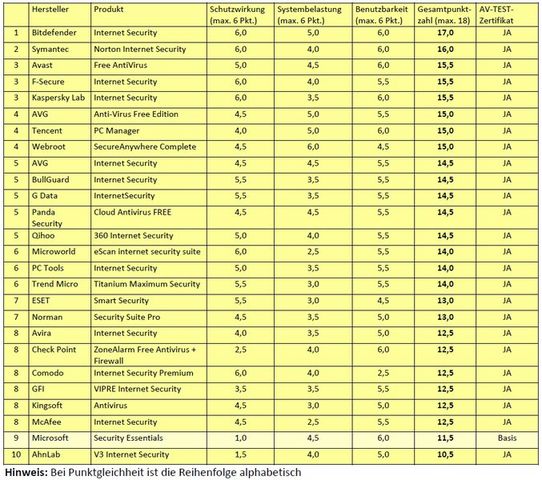 The protection packages from Bitdefender and Symantec achieved the best points totals in the laboratory test carried out by AV-TEST using Windows XP as a test platform. The protective factor of both of these packages is much higher than that of the standard solution from Microsoft. 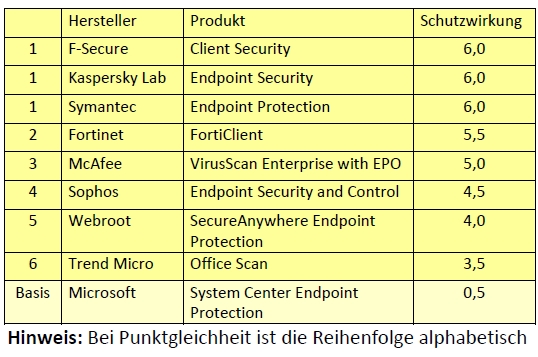 The tests carried out by AV-TEST always focus on the protection provided by the products examined. In the test run on eight "Endpoint Security Solutions under XP", the solutions from F-Secure, Kaspersky Lab and Symantec achieved the best results when detecting malware. Although the Endpoint Protection module from Microsoft was only used to obtain a base value, the comparison of the test results clearly speaks for itself.

In the second test in 2013, eight "Endpoint Security Solutions under XP" were carefully examined in the AV-TEST laboratory. The test results of the Endpoint Protection module supplied by Microsoft as part of its System Center 2012 were used as base values in the test, in which the solutions from F-Secure and Symantec came out on top with excellent results.

XP Continues to Be Well Protected

The overall result of the April/May test lists the Internet Security package from Bitdefender in first place with 17 of a maximum possible total of 18 points, closely followed by the Symantec solution with 16 points. Three programs share third place after all achieving an excellent total of 15.5 points: the free protection package from Avast and the solutions from F-Secure and Kaspersky Lab. Although Avast is slightly weaker than its rivals in terms of protection, it achieved more points for having less of a load on the XP system.

You can find the individual test results online at: https://www.av-test.org/en/tests/home-user/windows-xp/marapr-2013/

Endpoint security solutions are absolutely indispensable for anyone looking for professional protection for their office PCs. In its second major test in March and April 2013, the anti-virus test laboratory AV-TEST in the German city of Magdeburg decided to test nine packages for Windows XP due to the fact that most computers in German offices still use this somewhat older Microsoft system.

The clients of all corporate solutions were tested on XP systems in the AV-TEST laboratory in order to assess their performance in the categories of “Protection”, “System Load” and “Usability”. The package from Microsoft was the exception among the products tested because the Endpoint Protection module is part of Microsoft System Center 2012 and cannot be purchased separately. The Microsoft solution was therefore not certified in the recent AV-TEST test and its results are only listed as benchmark values that help users of the System Center to decide which protective module they want to rely on in the future.

The Best Protection for Office PCs with XP

On the whole, the best product in the test was the endpoint security solution from F-Secure, which came top of the table with a 16.5 of a maximum possible total of 18.0 points. This winner was closely followed by the security solution from Symantec, which scored a total of 16.0 points. Both of these packages and the product from Kaspersky Lab were all able to achieve full marks in the test category of “Protection".

The solutions from F-Secure and Symantec were followed in the ranking by the packages from Webroot, Fortinet, Kaspersky Lab, McAfee and Sophos, all of which achieved good overall scores of between 14.0 and 15.0 points. The solution from Trend Micro received a slightly lower total of 12.0 points but still performed well enough to be awarded AV-TEST certification.

The protection package from Microsoft only achieved a total of 11.5 points and is therefore the last product in the results table. If it had been subjected to a certification test, this package would have missed its target. In this case, however, the test results for the Microsoft solution are only provided as comparative values.

You can find the individual test results online at: https://www.av-test.org/en/tests/corporate-user/windows-xp/

The following magazines and online portals published reports on these recent tests carried out by AV-TEST: