36 Security Apps for Android Are Put Under Constant Fire

In the latest endurance test carried out in the AV-TEST laboratory, 36 apps had to face a number of complex examinations. Over a period of 6 months, the protection, usability and functions of the protection programs for mobile devices were evaluated in three rounds of testing. 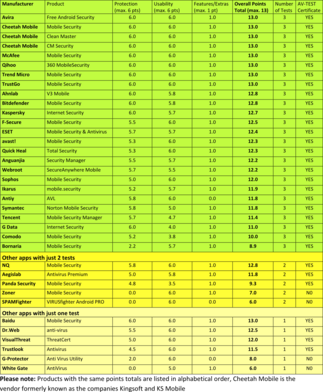 The overall result of the endurance test

A total of 8 protection apps achieved the maximum total of 13 points (in the AV-TEST endurance test carried out on Android apps between January 2014 and June 2014).

AV-TEST’s first endurance test on security apps for Android was carried out exactly one year ago. In the new test, which took place between January and June 2014, 36 apps had to prove their worth. Nevertheless, not all of the mobile programs completed the entire series of tests. 25 apps were examined in all of the tests, 5 apps only underwent two rounds of testing and 6 apps only completed one round of testing.

The endurance test not only focused on a multitude of products of distinction, but also a number of unknown apps. Some of these system guardians are completely free to use, while others require users to pay an annual fee because they also offer a variety of different premium functions. The purchaseable apps can be tested for a period of 15 or 30 days before deactivating their premium functions. These apps do not, however, deactivate their virus protection function after the test period.

A total of 8 apps achieved the maximum possible score of 13 points in the endurance test. This points total is made up of 6 points each for the categories of Protection and Usability and one point for extra functions. 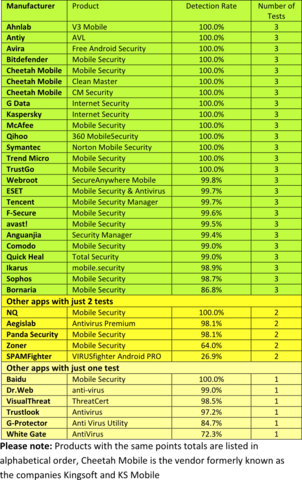 A total of 14 security apps identified 100 percent of the attackers in the 6-month-long endurance test and therefore achieved a top result (in the AV-TEST endurance test carried out on Android apps between January 2014 and June 2014). 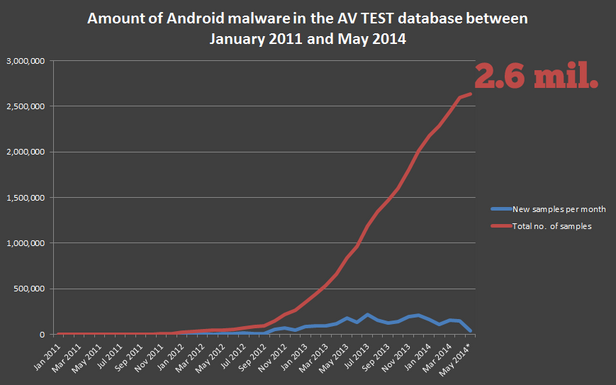 Back in May 2014, there were already over 2.6 million pieces of malware threatening Android systems. In July or August 2014, this total will break the three million mark (source: av-test.org). 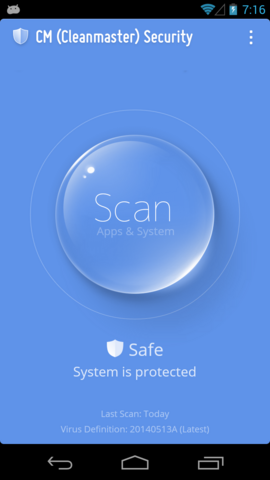 This app achieved the maximum number of points available in the endurance test and, according to the Google Play Store, has attracted a total of over 10 to 50 million users. 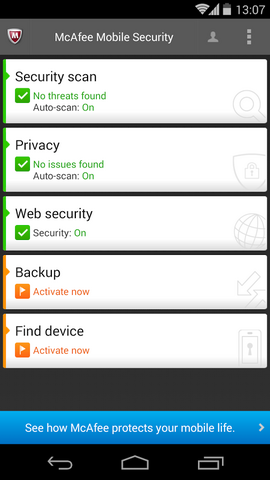 The app achieved the maximum available total of 13 points in the test and also offers users an extremely large number of extra features.

The test required each of the apps to scan the newly updated AV-TEST reference set, which contains nearly 2300 pieces of malware, and detect the malicious apps and attacks on three separate occasions. The reference set contained the latest threats, which were collected in the 4 weeks leading up to the test.

These were followed by 8 apps that achieved a detection rate of between 99 and 100 percent in the Protection category. Only three of the apps tested failed to reach this threshold.

When the Battery Starts to Slowly Simmer

In the past it was often the case that security apps would constantly run and keep mobile processors busy at all times. Such a high level of activity is not exactly beneficial for a device's battery. With this in mind, the testers decided to examine how much power the security apps constantly demand from the Android system, which apps drain the battery and which apps permanently need to access data from the Internet.

A large number of great apps are available for Android systems and users really don't want to do without them. Some of the security apps, however, may throw a spanner in the works because now and again, they also identify safe mobile programs as malicious and incorrectly warn users.

The testers therefore installed nearly 4000 known and safe apps from the Google Play Store and other well-known app shop websites. On the whole, most of the apps performed excellently when completing this task and didn't identify any false positives. There were only a few exceptions to this result, for example the protection programs from Comodo, G Data and Tencent, which identified safe apps as malware in the test and blocked them time and time again. As a result, these test participants missed out on several points.

Extras: from a Simple App to a Bag of Surprises

Some of the apps tested shower users with a multitude of extra features, while others only offer the essentials. It is paramount that an app offers anti-theft functions that enable users to remotely block, locate or wipe their smartphone or tablet.

Only two of the apps that participated in the tests over the entire 6-month period lacked these important functions, namely the apps from Antiy and G-Protector. All of the other apps tested contained anti-theft functions.

They also contained features such as anti-phishing filters, network monitors and system optimisers, all of which are useful but do not necessarily protect devices against attacks. On top of this, some of the extras offered by purchaseable apps are only available during the test period because they form part of the premium versions.

The amount of malware threatening Android systems is currently increasing with no end in sight. In the period between June 2013 and June 2014, the number of pieces of malware even tripled to a total of over 2.6 million threats. These are also now being joined by the first reports concerning ransomware on Android systems, in which a Trojan blocks access to a mobile device and allegedly only enables users to regain access if they pay a certain amount.

The good news is that there is a way of preventing all of these attacks: installing a good security app for Android. A total of 8 apps achieved the maximum possible score of 13 points in the endurance test, namely those from Avira, Cheetah Mobile (all 3 versions), McAfee, Qihoo, Trend Micro and TrustGo.

If your only priority is top performance in the Protection category, you can also consider the system guardians from Ahnlab, Bitdefender, Kaspersky and G Data alongside the eight apps listed above.