32 Protection Apps for Android Put to the Test

There are constant media reports about hacker attacks on smartphones and tablets, aided by infected Android apps. They always conclude with recommended protection apps for more security. But which of them are good? AV-TEST recently evaluated 32 security apps for their protection function, usability and battery strain. 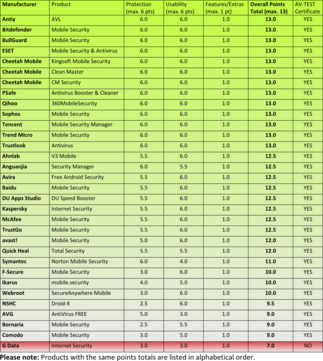 32 Android apps put to the test

TV and Internet magazines like to demonstrate how easy it is to exploit an unprotected mobile device. The reports illustrate how much damage even a single infected Android app can unleash: it can quickly launch expensive premium text messages, initiate or reroute online purchases or divert bank transactions to third-party accounts. The owner of the mobile device is at first oblivious to the whole thing. What's more, smartphones and tablets are almost always on and thus available to criminals 24 hours a day. A good protection app can prevent all these intrusions. 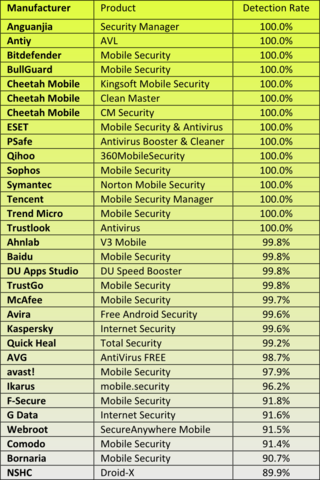 Nearly half the tested protection apps had an intrusion detection rate of 100 % (AV-TEST Sep./Oct. 2014). 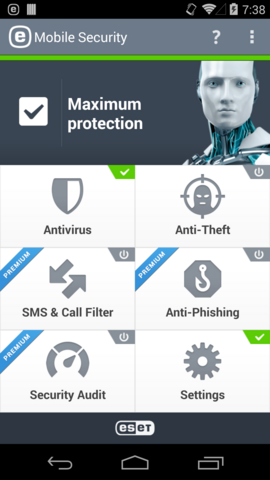 While this app providing strong protection does come with an annual fee, it also offers lots of premium functions. 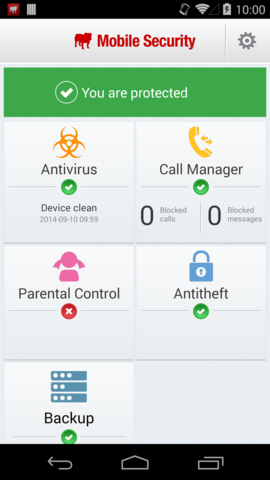 32 apps put to the test – 13 reached the highest ranking

Wholly 13 apps each achieved 13 points and advanced to the top of the ranking. They are from Antiy, Bitdefender, BullGuard, Cheetah Mobile (3 products), ESET, PSafe, Qihoo, Sophos, Tencent, Trend Micro and Trustlook. Most of the apps can be used completely free of charge. A few of the apps – after a free trial phase – offer special premium functions only at an additional charge. The protection function is never switched off, even after the trial phase.

In the latest test, the 32 security apps for Android systems had to defend against more than 2,200 select threats in the AV-TEST reference set. This group represents only a small subset of the entire rogue's gallery of malware under Android. Yet they are the most dangerous apps collected within the 4 weeks prior to test launch.

Without exception, all the malware specimens in the test were detected and thwarted even by 15 apps. Alongside the 13 apps reaching the maximum point score were also the system watchdogs from Anguanjia and Symantec. So those seeking only the bare-bones protection function have an even larger selection of mobile protectors to choose from.

Lots of protection without sacrificing performance

The testers made the positive discovery that, without exception, all the apps are no longer committing a major error: putting an unnecessary strain on the mobile devices. In the past there were repeatedly apps that slowed down the performance of the devices, literally drained the battery dry, and also put a strain on the precious volume of online traffic. None of the apps in the test have anything to be ashamed of in that category: they are model students.

But the maximum 6 points in the category of usability consisted of an evaluation of the performance and frequency of false positives. And it was in the latter area where some apps had problems in the test.

Each security app tested was required to monitor nearly 2,000 app installations from the Google Play Store and 1,000 app installations from other online sources. All the programs were clean without exception, i.e. not infected. A total of 24 protection apps passed this test with flying colors – 8 apps fell short in certain areas. However, 5 of these 8 watchdogs only tripped up on one single failed program detection. The app from Symantec quarantined 4 clean apps. The products from AVG and G Data isolated fully 12 to 13 benign Android programs.

Only 12 or 13 falsely detected apps doesn't sound like much, after all they only represented roughly 0.4 percent of 3,000 apps. However, there are currently some 1.2 million apps available on Google Play alone.

Many of the security programs offer a wide array of extra features. A small essential package really ought to offer the anti-theft functions. This enables the owner to not only locate a stolen or lost device via a website. It can normally also be remotely locked or wiped. Unfortunately, not all manufacturers offer this directly, although the Android system even goes great lengths towards supporting them in this with existing functions. Unlike all the others, the system watchdogs from Antiy, Baidu, DU Apps Studio, Cheetah Mobile (except the CM Security version) and Trustlook offer no anti-theft functions.

All the other extra features are nice to have, but far from absolute necessities. These include, for example, functions such as call blocking, message filter, parental control, backup, system or network monitors, modules for safe surfing or encryption. Apps offering nearly all of the above-mentioned features are available from G Data and Sophos.

Android is easy to protect

The app providers make it easy for users to protect their Android system, even if they are not prepared to spend any money to do so. The few apps that charge an annual fee often provide premium functions that a free app normally does not offer.

13 apps shared the first-place ranking and differ almost exclusively in their extra features. Some of them are even free of charge, such as those provided by Antiy, Cheetah Mobile, PSafe, Qihoo, Sophos, Tencent or Trustlook.

Other equally good apps with an annual fee are from Bitdefender, BullGuard, ESET and Trend Micro. But even these still continue to protect the system reliably after a free trial period. It's just that the premium functions are then disabled.