The AV-TEST Endurance Test on Security Apps for Android – January to June 2013.
All owners of smartphones and tablets with Android operating systems are on the lookout for the best protection app for their device. AV-TEST therefore spent the first six months of the year subjecting all of the security apps available on the market to three difficult tests in its laboratory.

An alarming development was recently identified in the Android world, with the amount of malware detected in Android systems increasing from 250,000 to over 900,000 samples in just six months. This figure will break through the one million mark by as early as July 2013. At present, 30 different security apps are working to counter this huge amount of malware threatening Android systems. Over the past six months, the experts in the AV-TEST laboratory tested all of the apps available for Android devices three times in order to examine their “Protection”, “Usability” and “Features (Extras)”. The laboratory awarded the apps a maximum 6 points in the first two categories and also gave an additional point for good extra features. The apps tested were therefore able to achieve a maximum total of 13 points. The results in all three categories were added together to obtain the overall results of the endurance test.

30 Apps Available on the Market

The first test, which was carried out in January, focused on 22 security apps. The number of applications available had already increased to 30 by the time the last of the three tests was carried out. In order to achieve an accurate comparison of all protection apps, the test results only directly compare the apps that completed the same number of tests. The apps are therefore divided up into three groups in the results table according to whether they were examined in three tests, two tests or one test. 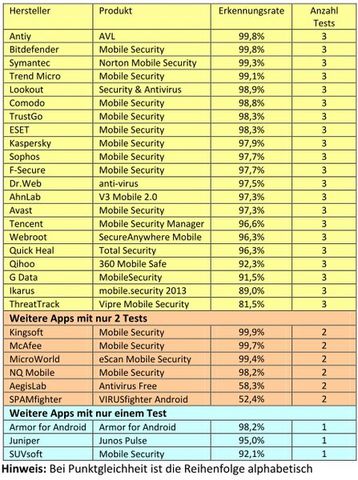 An impressive total of four apps achieved an average detection rate of over 99 percent after completing three tests. The apps from Antiy and Bitdefender were even able to achieve an excellent result of 99.8 percent. Kingsoft and McAfee both produced excellent results among the apps that only completed two tests. 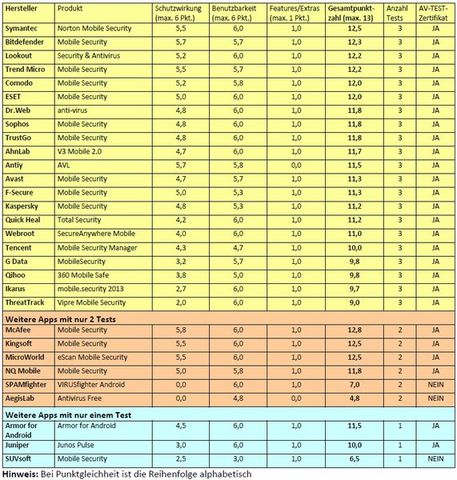 A total of six apps achieved an overall result of between 12.0 and 12.5 of a maximum of 13.0 possible points after completing three tests. The Norton Mobile Security app from Symantec achieved the best overall result, closely followed by the apps from Bitdefender, Lookout and Trend Micro. The apps from McAfee, Kingsoft and MicroWorld also achieved good overall results, but only completed two tests and are therefore not listed in the top section of the table. (Please note: the app vendor formerly known as GFI is now called ThreatTrack).

The Stress of the Endurance Test

The first large and important hurdle facing the apps in the endurance test was the examination of their ability to detect malware. In order to pass this stage of the test, all of the apps had to detect the AV-TEST reference set, which contained nearly 2600 pieces of malware recorded in the four weeks leading up to the start of the test in question. After three tests in 6 months, the apps from Antiy and Bitdefender achieved the best malware detection rate of 99.8 percent.

After all three tests, the apps from Symantec and Trend Micro were able to achieve an average detection rate of over 99 percent in their malware scans. The following apps were also able to record good scanning rates of between 98.9 and 96.3 percent: Lookout, Comodo, TrustGo, ESET, Kaspersky, Sophos, F-Secure, Dr.Web, AhnLab, Avast, Tencent, Webroot and Quick Heal.

The apps from Qihoo, G Data, Ikarus and ThreatTrack, on the other hand, experienced some problems when detecting the malware and only achieved rates of between 92.3 and 81.5 percent.

The AV-TEST experts used the test category of "Usability” to answer other important questions such as: What is the security apps’ load on the device’s processor and, in turn, its battery? Do the apps have a negative impact on the performance of the device? Do they constantly load data in the background? Do the programs display false positives when installing 500 clean apps?

The apps examined produced impressive results in this category of the endurance test, with most of them achieving between 5.3 and 6.0 points. In fact, the maximum total of 6.0 points was even awarded eleven times. Only two apps were placed further down in the ranking with lower, yet still successful, totals of between 4.7 and 5.0 points.

Good Extras on the Side

An additional point was also up for grabs in each of the three tests for apps featuring a good range of extras. All of the apps apart from the Antiy app were able to achieve this additional point with their good extra features.

One of these extras, which has now virtually become a basic function of security apps, is anti-theft protection, which can be used to remotely locate, block or wipe a smartphone. This important function was available in 26 of the apps tested. Only the apps from Antiy, AegisLab (free version), Kingsoft and SPAMfighter do not offer any anti-theft protection. The last three apps in this group only completed two tests and are therefore listed in the second section of the overall results table.

The apps tested also offer a diverse range of other extras, for example functions like a call blocker for unwanted callers, a mail filter for unwanted mails, protective modules that enable users to safely surf the Web on their mobile phones, a parental control feature and a backup tool.

Three of the apps even offer a module that enables users to encrypt the data on their device and its SD card. Other extras identified in the tests include individual functions for networks and useful system tools.

In the overall table of results after three tests, the app from Symantec is at the very top with an average of 12.5 of a total of 13.0 possible points. It is, however, very closely followed by the apps from Bitdefender, Lookout, Trend Micro, Comodo and ESET, which achieved results of between 12.3 and 12.0 points on average.

Some of the apps examined in the endurance test can be used for free for up to four weeks and then cost up to 15 euros a year. A few of the apps are actually completely free, for example those from Lookout, Comodo or Sophos, to name but a few. Most of these free apps do, however, require users to register with an e-mail address or only offer limited functions, as is the case with the Lookout app.

The AV-TEST laboratory tests nearly all apps available for Android systems every two months. All test results and background information can be accessed for free online at www.av-test.org.